From Nigel Hamilton's acclaimed World War II saga, the astonishing story of FDR's yearlong, defining battle with Churchill in 1943, as the war raged in Africa and Italy

1943 was the year of Allied military counteroffensives, beating back the forces of the Axis powers in North Africa and the Pacific—the “Hinge of Fate,” as Winston Churchill called it. In Commander in Chief Nigel Hamilton reveals FDR’s true role in this saga: overruling his own Joint Chiefs of Staff, ordering American airmen on an ambush of the Japanese navy’s Admiral Yamamoto, facing down Churchill when he attempted to abandon Allied D-day strategy (twice). This FDR is profoundly different from the one Churchill later painted. President Roosevelt’s patience was tested to the limit quelling the Prime Minister’s “revolt,” as Churchill pressured Congress and senior American leaders to focus Allied energy on disastrous fighting in Italy and the Aegean instead of landings in Normandy. Finally, in a dramatic showdown at Hyde Park, FDR had to stop Churchill from losing the war by making the ultimate threat, setting the Allies on their course to final victory.

In Commander in Chief, Hamilton masterfully chronicles the clash of nations—and of two titanic personalities—at a crucial moment in modern history.

“The rebuttal to the Churchill multivolume history . . . The war retains its power to shock and surprise.” — Boston Globe

About the author
Nigel Hamilton

NIGEL HAMILTON is a best-selling and award-winning biographer of President John F. Kennedy, General Bernard "Monty" Montgomery, and President Bill Clinton, among other subjects. His most recent book, The Mantle of Command: FDR at War, 1941–1942, was long-listed for the National Book Award. He is a senior fellow at the McCormack Graduate School, University of Massachusetts, Boston, and splits his time between Boston, Massachusetts, and New Orleans, Louisiana.

PART ONE: A SECRET JOURNEY

It was late in the evening of Saturday, January 9, 1943, when a locomotive pulling the Ferdinand Magellan and four further carriages1 departed from a special siding beneath the Bureau of Engraving in Washington, D.C.? — ?the federal government’s massive printing house for paper money, and thus a sort of Fort Knox of the capital.

Aboard was the President of the United States, his secretary, his White House chief of staff, his naval aide, his White House counselor, and his doctor, all traveling to Hyde Park for the weekend, as usual. Or so it seemed.

The Secret Service had insisted the President use for the first time the massive new railway carriage reconstructed for him? — ?the first such railcar to be made for the nation’s chief executive since Lincoln’s presidency. Boasting fifteen-millimeter armored steel plate on the sides, roof, and underside, the carriage had three-inch-thick bulletproof glass in all its windows. Best of all, it had a special elevator to raise the President, in his wheelchair, onto the platform of the car? — ?which weighed 142 tons, the heaviest passenger carriage ever used on U.S. rail track.

The car was “arranged with a sitting room, a dining room for ten or twelve persons, a small but well arranged kitchen, and five state rooms,” Admiral William Leahy, the President’s military chief of staff, recorded in his diary. “Dr. McIntire, Harry Hopkins, Miss Tully, and I occupied the state rooms, and Captain McCrea joined us in the dining room. Other cars accommodated the Secret Service men, the apothecary, the communications personnel, and the President’s valet,” Chief Petty Officer Arthur Prettyman.2

Their luggage had been taken to the baggage car separately, an hour earlier. But was the President really going to Hyde Park? If so, why the thousand pounds of bottled water? Why clothes for two weeks away? Why the four Filipino members of the crew of the USS Potomac, the presidential yacht, replacing the normal Pullman staff? Why Eleanor, the First Lady, and Louise Macy, the new wife of Harry Hopkins, bidding them goodbye at the underground siding?

Something was up? — ?something unique. Even historic.

Among the few who did know of the President’s real destination, most had counseled against it. Even the President’s naval aide, Captain John McCrea, opposed the idea when the President tricked McCrea into supplying information on the geography, history, and significant towns of the region of North Africa. Following the successful Torch landings in Algeria and Morocco on November 8, 1942, the President had explained to McCrea? — ?whose knowledge of the sea exceeded his knowledge of land? — ?U.S. troops would be fighting in battle, and he’d found himself, as U.S. commander in chief, sadly ignorant of the terrain. “See if you can help me correct that deficiency,” he’d instructed McCrea, “by means of travel folders, etcetera, put out by travel agencies.”

Travel agencies? As the President had quickly assured McCrea, “in the planning and preparatory stages” of Operation Torch, he hadn’t wanted to draw attention to “that area.” “But now that the troops are there,” he’d added, “that restraint is removed.”

Innocent of any ulterior motive, McCrea had assembled a raft of informative material. “The President was pleased with it and confided: ‘Just the sort of information I want.’?”

Some weeks later, though, “late one afternoon, early in December the President sent for me, sat me down at the corner of his desk and this is about the way it went.

“The Pres: ‘John, I want to talk to you in great confidence and the matter about which I am talking is to be known to no one except those who need to know.’ Since this was the first time the Pres. had ever spoken to me thus, naturally I was greatly curious,” McCrea later narrated in his somewhat stilted literary style. The President had then confided, “?‘Since the landing of our troops in No[rth] Africa, I have been in touch with Winston by letter. I feel we should meet soon and resolve some things and that that meeting should take place in Africa. Winston has suggested Khartoum? — ?I’m not keen on that suggestion. Marrakech and Rabat have been suggested. I’m inclined to rule out those areas, and settle for Casablanca.’ And then to my amazement the President said: ‘What do you think of the whole idea?’?”

McCrea had been stunned.

“As quickly as I could,” McCrea recalled, “I gathered my wits and proceeded about as follows. ‘Right off the top of my head Mr. Pres. I do not think well of the idea. I think there is too much risk involved for you.’?”

The President had been unmoved. “Our men in that area are taking risks, why shouldn’t their Commander in Chief share that risk?”

McCrea was a seasoned sailor? — ?an aspect he thought might be a more effective counter. “?‘The Atlantic can be greatly boisterous in the winter months,’?” he had pointed out, “?‘and a most uncomfortable passage is a good possibility? — ?’

McCrea was shocked. No U.S. president had flown while in office? — ?ever. “This was a great surprise to me because I knew he did not regard flying with any degree of enthusiasm,” McCrea recounted. Mr. Roosevelt had not flown in a decade, in fact, since traveling to Chicago from New York before the 1932 election. In terms of the President’s safety, waging a world war, it seemed a grave and unnecessary risk? — ?especially in terms of distance, and flight into an active war zone. But the President was the president.

McCrea had therefore softened his objection. “I quickly saw that I was being stymied and I tried to withdraw a bit.

“?‘Mr. Pres.,’ said I, ‘you have taken me quite by surprise with this proposal. I would like to give it further thought. Right off the top of my head I wouldn’t recommend it.’?”

When, the next morning, Captain McCrea went upstairs to the President’s Oval Study, carrying with him some of the latest reports, secret signals, decoded enemy signals, and top-secret cables from the Map Room? — ?of which he was the director? — ?he’d recognized the futility of opposing the idea. It was a colossal risk, he still thought, but he knew the President well enough to know that, if Mr. Roosevelt had raised the matter, it was because his mind was probably already made up, and he was simply looking for the sort of reaction he would be likely to meet from others. 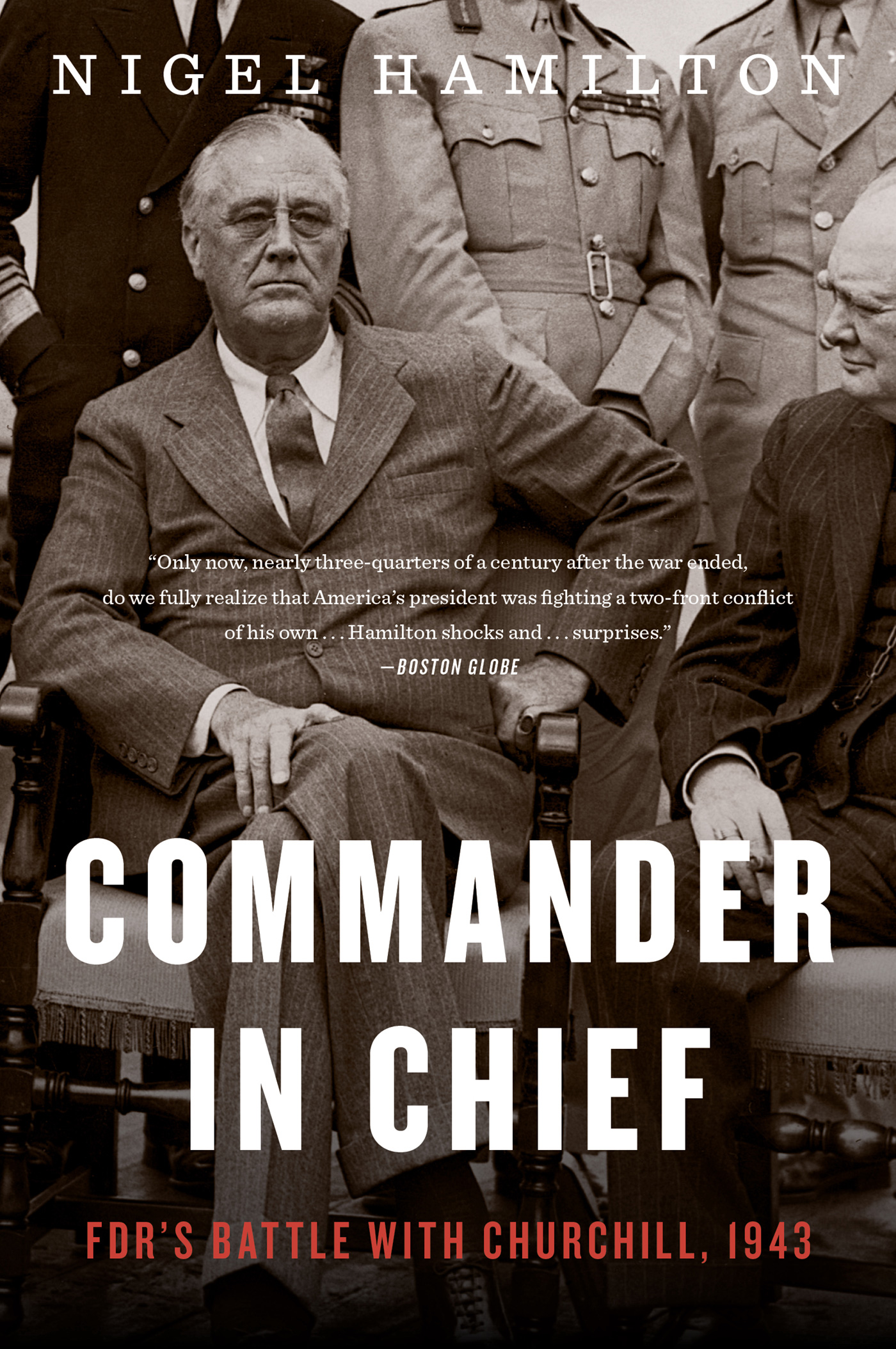