Clans of the Alphane Moon

by Philip K. Dick
$14.99
Clans of the Alphane Moon deals with one of Philip K. Dick’s favorite themes: mental illness and what that actually means. The Alphane moon may be full of people with clinical disorders, but are the "normal" people who are supposed to cure them really any saner?

On a planet run by escapees from a mental institution, the doctors who arrive to restore order may be the craziest of all.

For years, the third moon in the Alphane system was used as a psychiatric hospital. But when war broke out between Earth and the Alphanes, the hospital was left unguarded and the inmates set up their own society, made up of competing factions based around each mental illness. When Earth sends a delegation to take back the colony, they find enclaves of depressives, schizophrenics, paranoiacs, and other mentally ill people coming together to repel what they see as a foreign invasion. Meanwhile, back on Earth, CIA agent Chuck Rittersdorf and his wife Mary are going through a bitter divorce, with Chuck losing everything. But when Chuck is assigned to clandestinely control an android accompanying Mary to the Alphane moon, he sees an opportunity to get his revenge.

Over a writing career that spanned three decades, PHILIP K. DICK (1928–1982) published 36 science fiction novels and 121 short stories in which he explored the essence of what makes man human and the dangers of centralized power. Toward the end of his life, his work turned to deeply personal, metaphysical questions concerning the nature of God. Eleven novels and short stories have been adapted to film, notably Blade Runner (based on Do Androids Dream of Electric Sheep?), Total Recall,Minority Report, and A Scanner Darkly. The recipient of critical acclaim and numerous awards throughout his career, Dick was inducted into the Science Fiction Hall of Fame in 2005, and in 2007 the Library of America published a selection of his novels in three volumes. His work has been translated into more than twenty-five languages.

BEFORE ENTERING THE supreme council room, Gabriel Baines sent his Mans-made simulacrum clacking ahead to see if by chance it might be attacked. The simulacrum — artfully constructed to resemble Baines in every detail — did many things, since it had been made by the inventive clan of Manses, but Baines only cared to employ it in its maneuvering for defense; defending himself was his sole orientation in life, his claim to membership in the Pare enclave of Adolfville at the north end of the moon.

Baines had of course been outside Adolfville many times, but he felt safe — or rather relatively safe — only here, within the stout walls of this, the Pare city. Which proved that his claim to membership in the Pare clan was not contrived, a mere simulated technique by which he could gain entry into the most solidly-built, sturdy and enduring urban area anywhere. Baines beyond doubt was sincere . . . as if there could be any doubt of him.

For example, there was his visit to the incredibly degrading hovels of the Heebs. Recently he had been in search of escaped members of a work brigade; being Heebs they had perhaps straggled back to Gandhitown. The difficulty, however, was that all Heebs, to him at least, looked alike: dirty, stooped creatures in soiled clothing who giggled and could not concentrate on any complicated procedure. They were useful for mere manual labor, nothing more. But with the constant need for tinkering improvement of Adolfville’s fortifications against the predations of the Manses, manual labor was currently at a premium. And no Pare would dirty his hands. Anyhow, among the dilapidated shacks of the Heebs he had felt pure terror, a sense of almost infinitely vast exposure among the most flimsy of human constructs; it was an inhabited garbage dump of cardboard dwellings. The Heebs however did not object. They dwelt among their own refuse in tranquil equilibrium.

Here today, at the twice yearly council meeting representing all the clans, the Heebs would of course have a spokesman; speaking for the Pares he would find himself seated in the same room with an odious — literally so — Heeb. And this scarcely dignified his task. Probably it would be straggle-haired, fat Sarah Apos-toles again this year.

But more ominous would be the Mans representative. Because, like every Pare, Baines was terrified of each and every Mans. Their reckless violence shocked him; he could not comprehend it, so purposeless was it. For years he had put Manses down as simply hostile. But that did not explain them. They enjoyed violence; it was a perverse delight in breaking things and intimidating others, especially Pares such as himself.

But knowing this did not fully help him; he still quailed at the anticipated confrontation with Howard Straw, the Mans delegate.

Wheezing asthmatically his simulacrum returned, a fixed smile on its Baines-like artificial countenance. “All in order, sir. No deadly gas, no electrical discharge of a dangerous degree, no poison in the water pitcher, no peepholes for laser rifles, no concealed infernal machines. I would offer the suggestion that you can safely enter.” It clacked to a halt, became silent,

“No one approached you?” Baines asked cautiously.

The simulacrum said, “No one is there yet Except, of course, for the Heeb sweeping the floor.”

Baines, out of a lifetime of protective cunning, opened the door a crack for that which was essential: a momentary glimpse of the Heeb.

The Heeb, a male, swept in his slow, monotonous way, the usual silly Heeb expression on his face, as if his work amused him. He could probably keep it up for months without becoming bored; Heebs could not tire of a task because they could not comprehend even the concept of diversity. Of course, Baines reflected, there was some virtue in simplicity. He had for instance been impressed by the famous Heeb saint, Ig-natz Ledebur, who radiated spirituality as he wandered from town to town, spreading the warmth of his harmless Heeb personality. This one certainly looked devoid of dangerousness. . . .

And the Heebs, at least, even their saints, did not try to convert people, as did the Skitz mystics. All the Heebs asked was to be let alone; they simply did not want to be bothered by life, and each year they shed more and more of the complexities of living. Returned, Baines reflected, to the mere vegetable, which, to a Heeb, was ideal.

Checking his laser pistol — it was in order — Baines decided that he could enter. So step by step he walked into the council room, took a chair, then abruptly changed to another; that one had been too close to the window: he presented too good a target to anyone outdoors.

To amuse himself while he waited for the others to arrive, he decided to bait the Heeb. “What’s your name?” he demanded.

“J-jacob Simion,” the Heeb said, sweeping with his standard silly grin unchanged; a Heeb never knew when he was being baited. Or if he did he did not care. Apathy toward everything: that was the Heeb way.

“You like your work, Jacob?” Baines asked, lighting a cigarette.

“Sure,” the Heeb said, and then giggled.

“Huh?” The Heeb did not appear able to comprehend the question.

The door opened and plump, pretty Annette Golding, the Poly delegate, appeared, purse under her arm, her round face flushed, her green eyes shining as she panted for breath. “I thought I was late.”

“No,” Baines said, rising to offer her a chair. He glanced professionally over her; no sign that she had brought her weapon. But she could be carrying feral spores in capsules secreted in a gum-pocket within her mouth; he made it a point, when he reseated himself, to select a chair at the far end of the big table. Distance . . . a highly valuable factor.

“Annette,” he said, “you’re such a pleasant, comfortable person. A shame you don’t marry. If you married me —”

“Be serious,” Baines said, crossly. He wondered how old she was; certainly no more than twenty. And, like all Polys, she was childlike. The Polys hadn’t grown up; they remained unfixed, and what was Polyism if not the lingering of plastic childhood? After all, their children, from every clan on the moon, were born Polys, went to their common, central school as Polys, did not become differentiated until perhaps their tenth or eleventh year. And some, like Annette, never became differentiated.

Opening her purse Annette got out a pac... 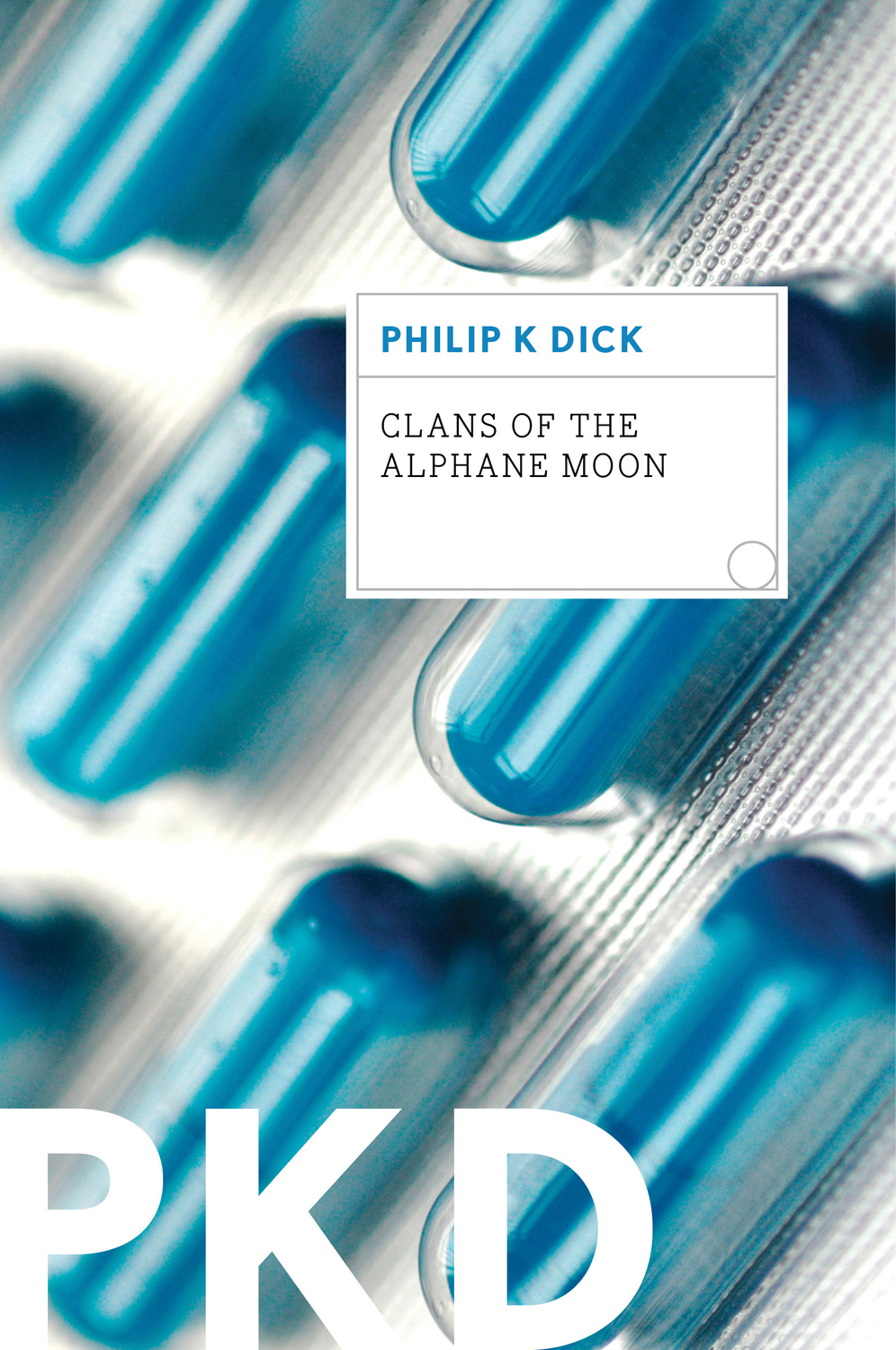