Chosen by a Horse

The horse Susan Richards chose for rescue wouldn’t be corralled into her waiting trailer. Instead Lay Me Down, a former racehorse with a foal close on her heels, walked right up that ramp and into Susan’s life. This gentle creature—malnourished, plagued by pneumonia and an eye infection—had endured a rough road, but somehow her heart was still open and generous. It seemed fated that she would come into Susan’s paddock and teach her how to embrace the joys of life despite the dangers of living.

An elegant and often heartbreaking tale filled with animal characters as complicated and lively as their human counterparts, this is an inspiring story of courage and hope and the ways in which all love—even an animal’s—has the power to heal.

About the author
Susan Richards

SUSAN RICHARDS has a B.A. in English from the University of Colorado and a master’s degree in social work from Adelphi University. She lives with her husband Dennis Stock and their beloved gang of four dogs and one Siamese cat.

IT WAS A cold March day and the horse paddock at the SPCA was full of mud. I stood shivering at the fence in the drizzle as my breath billowed gray mist over the top rail. In my hurry to get there I’d left the house without a hat or gloves, grabbing only a windbreaker from its hook above the basement stairs on my way to the garage.

If I had stopped to think, I would have responded as I usually did when hearing a plea for help for animals sick and suffering at the hands of humans: I might have done nothing, or I might have sent a check. But this time when my friend Judy called to tell me the SPCA had just confiscated forty abused horses from a Standardbred farm and needed help housing them, I ran for my jacket and jumped in the car.

I don’t know why this time was different, why in an instant I chose to do something I’d previously avoided. I was not accustomed to going to the rescue. Mine was never the face friends saw smiling over them as they woke up in the hospital after surgery. I wasn’t the one they called to drive them to get their stitches out or to pick up the results of lab tests or X-rays or anything medical. I had a horror of sickness, my own or anyone else’s.

With such an aversion to illness, why was I standing at the fence watching twenty emaciated broodmares with their foals stumble in the mud? Why did I answer that call? Perhaps it was just a knee-jerk reaction to a deep and abiding love of horses, a love passed down to me by my grandmother, a formidable, sometimes cruel woman who had become my guardian when I was five. As always, I cringed when I remembered my grandmother, and at the same time I envied her a now-vanished world full of ocean liners, Pullman cars, and best of all, horses. When I was growing up, there were still carriages and odd bits of harness in the stable at her home in South Carolina, lovely old carriages that hadn’t been driven in thirty years. I’d look at them and feel cheated that I hadn’t lived in a time when horsepower provided the only means of transportation.

In my grandmother’s attic was a trunk full of riding clothes, hers and her mother’s: brown leather field boots that laced up the front, handmade in England; wool tweed riding jackets with leather buttons and small tailored waists; linen breeches with leather leg patches; and wide-hipped jodhpurs with fitted calves.

There was also a coachman’s heavy wool livery with silver buttons engraved with an H for Hartshorne, my grandmother’s maiden name and my middle name.When I was six or seven I’d go through the contents of this trunk, carefully lifting out the brittle fabrics with the frayed edges and the disintegrating linings, and once, one of the coach-man’s buttons came off in my hand. I turned it over and on the back it said Superior Quality.

I put the button in my pocket, and thirty-five years later it hung on the bulletin board above my desk at home. It’s small and round and evokes more images than a feature-length film. One touch and I’m tugged into a world full of horses and carriages circa 1900: traffic jams of horses, horses broken down, horses parked at the curb, horses eating lunch, horses whose coats shine like the waxed paneling of the Knickerbocker Club on Fifth Avenue, and horses as shaggy as schnauzers. A perpetual horse show: every day, everywhere, all the time.

It was my grandmother who had given me my first horse when I was five.

“Her name is Bunty,” my grandmother proclaimed, handing me the lead line as she herself marched out of the pasture, leaving me alone with my new pony.

Standing at the other end of the lead, I squinted up at a fat white body slung between two sets of shaggy legs with a tail that swept the ground at one end and dark narrowed eyes under thick lashes at the other. It was like leaving me alone with a chain saw. I knew I was in mortal danger, but I was holding a horse. My horse.The best thing that had ever happened to me. I wish I could say I was a natural from the start.That I hoisted myself onto her back and, with a willow twig for a crop, went for a wild gallop around the field. But the truth is, I had no idea what to do. I stood trembling in my pink sundress, staring at the pretty pony until she lunged forward and removed some of the baby fat packed around my upper arm.

It never got much better than that, not with Bunty. I loved her anyway: blindly, doggedly, through years of her biting, kicking, and embarrassing me in horse shows by sitting down and refusing to enter the show ring, or refusing to leave it. Occasionally her foul mood lifted and she was a pleasure to ride, but most of the time she brought me to tears. At ten I was given a Morgan gelding named Alert and was shocked to discover that a horse could be gentle and affectionate. I hadn’t realized what a hostage I’d been and, beginning with Alert, developed a lifelong love of Morgans.

Now when I walked into my barn, I walked into timelessness: the coachman’s button evoking the distant past, my childhood, the present—all merged into one panorama of horses. I already owned three horses, and the time I spent with them wrapped around my day like brackets, the same beginning and ending no matter what happened in the middle. I worried, since turning forty, since I’d developed a bad back.What if I got too weak to take care of my three horses, a mare and two geldings? What if I got too stiff, what if I got too old? My next-door neighbor, Henry, had owned twenty-five dairy cows. He loved every single one like a daughter. Sometime in his late seventies he got old.Arthri-tis twisted his fingers, and emphysema stole his breath. For a year he crawled on his hands and knees from cow to cow to get the milking done. He hid his face behind his swollen hands and wept the day the big cattle trailer came to take away his herd. From time to time I had feared that something similar might happen to me. And yet, I stood, waiting to take on the care of yet another horse, one in desperate need of a home.

A man stood beside me at the fence, an SPCA volunteer named Ted, who had helped confiscate these horses. After I’d signed the necessary papers, agreeing to foster a mare, he’d come outside with me to help find and then herd her into the trailer for the drive to my farm.Ted was hatless and coatless, in blue jeans and a plaid flannel shirt, splattered with mud from his leather work boots to his unshaven chin. His brown ponytail hung dark and wet, coiled between his shoulder blades. Ted wiped at the raindrops gathering on his wire-rimmed glasses, smearing wet lines across thick bifocals. He wore a small gold stud in one ear and when I moved closer to look at the list he had pulled from his back pocket, I smelled nicotine. He traced a thick, nail-bitten index finger down the computer printout and stopped at number ten.

“Here she is.” He tapped the paper. “Current Squeeze.”

It was a strange way to acquire a horse, sight unseen, by choosing an appealing name off a Seized Merchandise list from the Ulster County Sheriff’s Department.The entire situation was strange. I knew nothing about Standardbreds beyond the fact that they were long-bodied, harness-racing horses, sometimes called trotters because they raced at a trot. I wouldn’t have known what to look for beyond general good health and a pleasant temperament, neither of which was relevant in this situation. The closest I’d ever come to a Standardbred had been the occasional high-speed glimpse of a brown face looking out the window of a horse trailer as it sped down the thruway on its way to the track with one of the graceful-looking racing carriages called a sulk...

PRAISE FOR CHOSEN BY A HORSE

"This is an inspirational story of what family means, and what the loss of one can do to us, and for us."—THE BOSTON GLOBE"Two kindred spirits find each other in this beautifully written memoir about the human-animal bond."—TEMPLE GRANDIN
We’re sorry 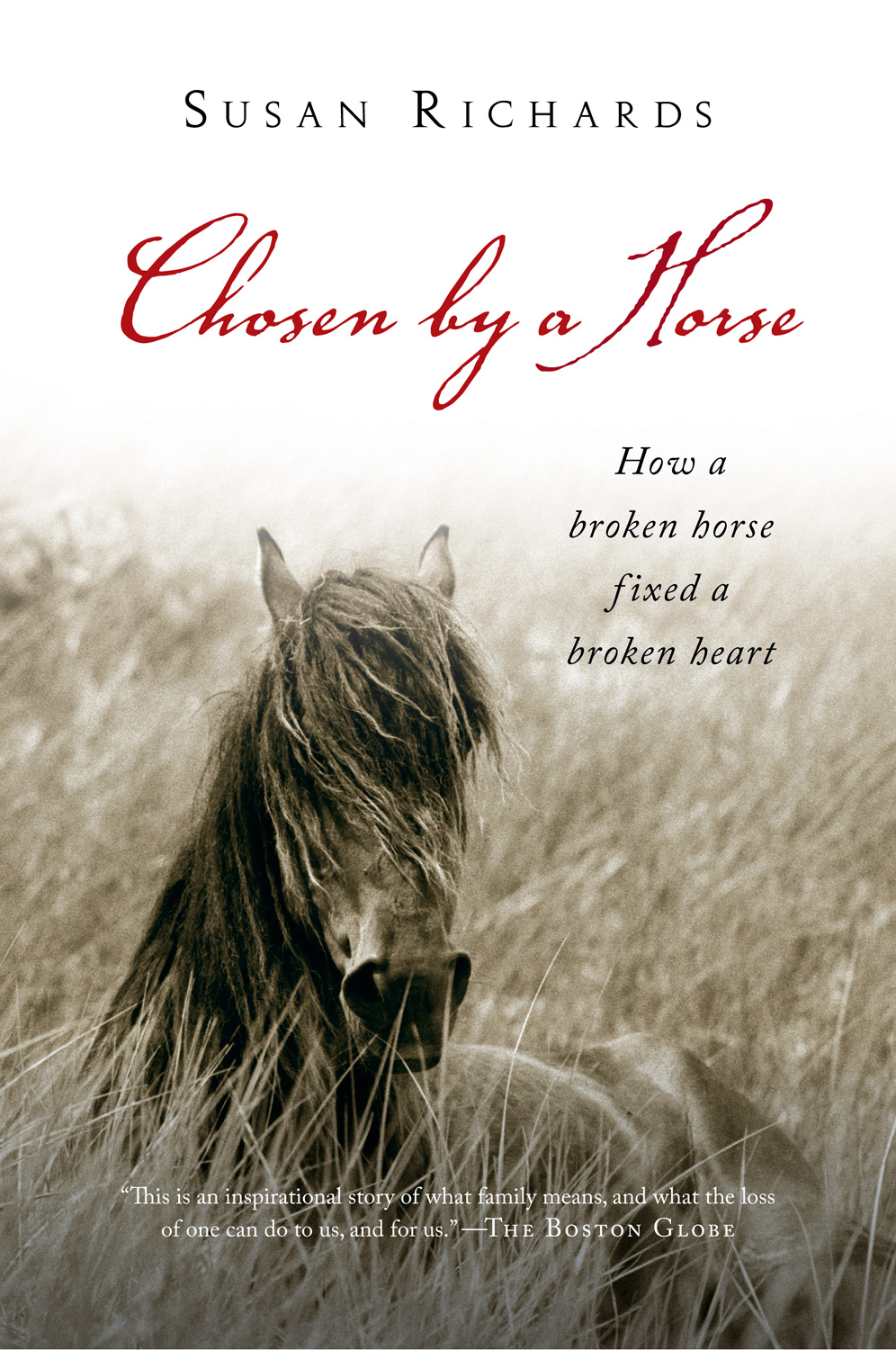