From advice columnist Meredith Goldstein, a dazzling, romantic, and emotionally resonant YA debut about a teen science whiz in Cambridge, Massachusetts, who tries to crack the chemical equation for lasting love and instead wreaks havoc on herself and the boys in her life.

From advice columnist Meredith Goldstein, a dazzling, romantic, and emotionally resonant YA debut about a teen science whiz in Cambridge, Massachusetts, who tries to crack the chemical equation for lasting love and instead wreaks havoc on herself and the boys in her life.

For seventeen-year-old Maya, the equation for happiness is simple: a dream internship at MIT + two new science nerd friends + a perfect boyfriend = one amazing summer. Then Whit dumps her out of the blue.

Maya is miserable until she discovers that her scientist mother, before she died, was conducting research on manipulating pheromones to enhance human attraction. If Maya can finish her mother’s work, maybe she can get Whit back. But when her experiment creates chaos in her love life, she realizes that maybe love and loss can’t be understood using the scientific method. Can she learn to trust the unmeasurables of love and attraction instead?

About the author
Meredith Goldstein

My phone lit up with a message from Yael.

We’re bailing early. Whiff walk, it said, a group text to Kyle and me.

I checked the time. It wasn’t even five o’clock.

I work until six today, I wrote back, then put the phone face-down on silent, so she wouldn’t be able to fun-bully me into dodging my one responsibility.

I was only a part-time intern in one of the biology labs at the Massachusetts Institute of Technology—?hired by my mom’s longtime research partner, Dr. Araghi, to transcribe his notes—?but I wanted to behave like a professional. I’d be starting at MIT as a freshman in the fall and wanted to prove that I wasn’t just my mother’s kid, and that I was serious about being there.

Sometimes, though, it was difficult to keep my focus.

Mainly because of Kyle and Yael.

“Maya!” Yael snapped. I whipped around to find her standing behind my workbench with Kyle at her side. Her spiral curls were pulled straight into a tight bun. A few ringlets had escaped and bounced against her freckled-covered forehead as she spoke.

“Don’t ignore me, girl. Get your stuff.”

“You’ll make up the time,” Kyle said. “Besides, Dr. Araghi left early to give some lecture. It’s, like, eighty degrees outside. Everyone is packing up early.”

I walked to the window near our benches, which were clustered in the back corner of the Araghi lab, on the third floor of MIT’s Building 68b, a tall, gray structure mostly populated by bio researchers in and out of lab coats.

It had been rainy and overcast for days around Boston, but it finally looked like summer. I spotted two blond girls walking across the quad in shorts and flip-flops, their ponytails moving like synchronized swimmers.

“Okay, just give me ten minutes to pack up my stuff,” I said, surrendering.

I placed Dr. Araghi’s tiny antiquated tape recorder in my drawer, grabbed my backpack, and followed Kyle and Yael through the maze of workbenches and out into the busy hallway. Once we were down the stairs and on the quad, and Kyle pulled off his hoodie in the heat, I noticed his new T-shirt, which said I LOVE MIT, but instead of the word LOVE—?or a heart—?there was a picture of a beaver. Kyle couldn’t get over the fact that MIT’s mascot was a beaver. Much of his wardrobe paid homage to the animal, and it had little to do with school spirit.

“You ‘beaver’ MIT?” I asked Kyle as he led us off campus.

We passed the massive Koch Center for research, slowing down to see the latest fluorescent, bio-themed artwork in the building’s lobby, then sped up to get to our real destination, farther down Main Street.

“Come with me, and you’ll be, in a world of pure imagination,” Kyle crooned off-key as we walked down the road.

“It’s from the original Willy Wonka movie,” I explained to Yael, who eyed Kyle with confusion as he walked backwards with his long arms stretched out, beckoning. Sometimes American cultural references went over Yael’s head. I’d learned that not every famous movie was big where she was from in Israel.

“I know the song,” she said, grinning. “I just can’t believe he’s so bad at singing.”

At that, Kyle raised the volume of his voice and lifted his middle finger in our direction. Yael was quick to lift hers right back.

I’ve lived in Cambridge since I was born, so I know every small square and street corner in the city, but I give Kyle and Yael credit for discovering the magic cloud of chocolate on Main Street. On the second day of my internship in the lab, Kyle approached my workspace—?which was right behind his—?dropped his head to his shoulder as if he were sizing me up, and then asked whether I wanted to join him and Yael on their “whiff walk.”

“Really?” Yael said from across the room, before I could answer. “We don’t even know her.”

Yael released a loud exhale but seemed to be giving in.

They let me follow them out of the lab that day, down to an industrial section of Main Street in Cambridge where, out of nowhere, an entire block of the street smelled like chocolate gas.

“It’s a mystery,” Kyle had said, his nose twitching. “It always smells like chocolate on this one block. We’re obsessed with it.”

“I think it’s just Cambridge Foods,” I explained after an inhale, pointing to the unmarked white brick building in front of us. “It’s a candy factory. I went to middle school with someone whose dad worked here.”

“They make the insides of candy bars here,” I continued. “Like the nougat you’d get in, like, a Three Musketeers. This part of Cambridge used to be a candy district. You’ve seen the old Necco building, right? I think they made the wafers there.”

Kyle grabbed my shoulders, startling me with the physical contact.

“Why is this not a big deal to you?” he barked, his voice dropping half an octave. His dark brown eyes, which matched his thick short hair, got wide as he raised his brows. “You say, ‘They make the insides of candy bars here,’ like that’s not the best thing ever. Yael and I had joked that Willy Wonka must live here, but now it’s, like, true.”

He paused and looked up, his eyes glazing over like he was dreaming.

“I mean, they make nougat. Right up there.” Kyle pointed at one of the building’s only windows. He said the word nougat like it meant solid gold.

"Recommended purchase for a library with a romance fiction following, especially those who can’t get enough of Sarah Dessen."—School Library Journal

"Maya is a clever, funny, and endearing heroine."—Booklist

"The story holds appeal for readers who love romantic reads, but it will also draw the more studious groups who will readily identify with Maya."--VOYA

"Fun, quirky details give this story and its characters a boost."--Kirkus

"There is an intriguing premise at the heart of this romance, and Goldstein provides greater emotional weight as Maya comes to better understand her own grieving process and gain insight into the organic ebbs and flows of authentic love."--Publishers Weekly 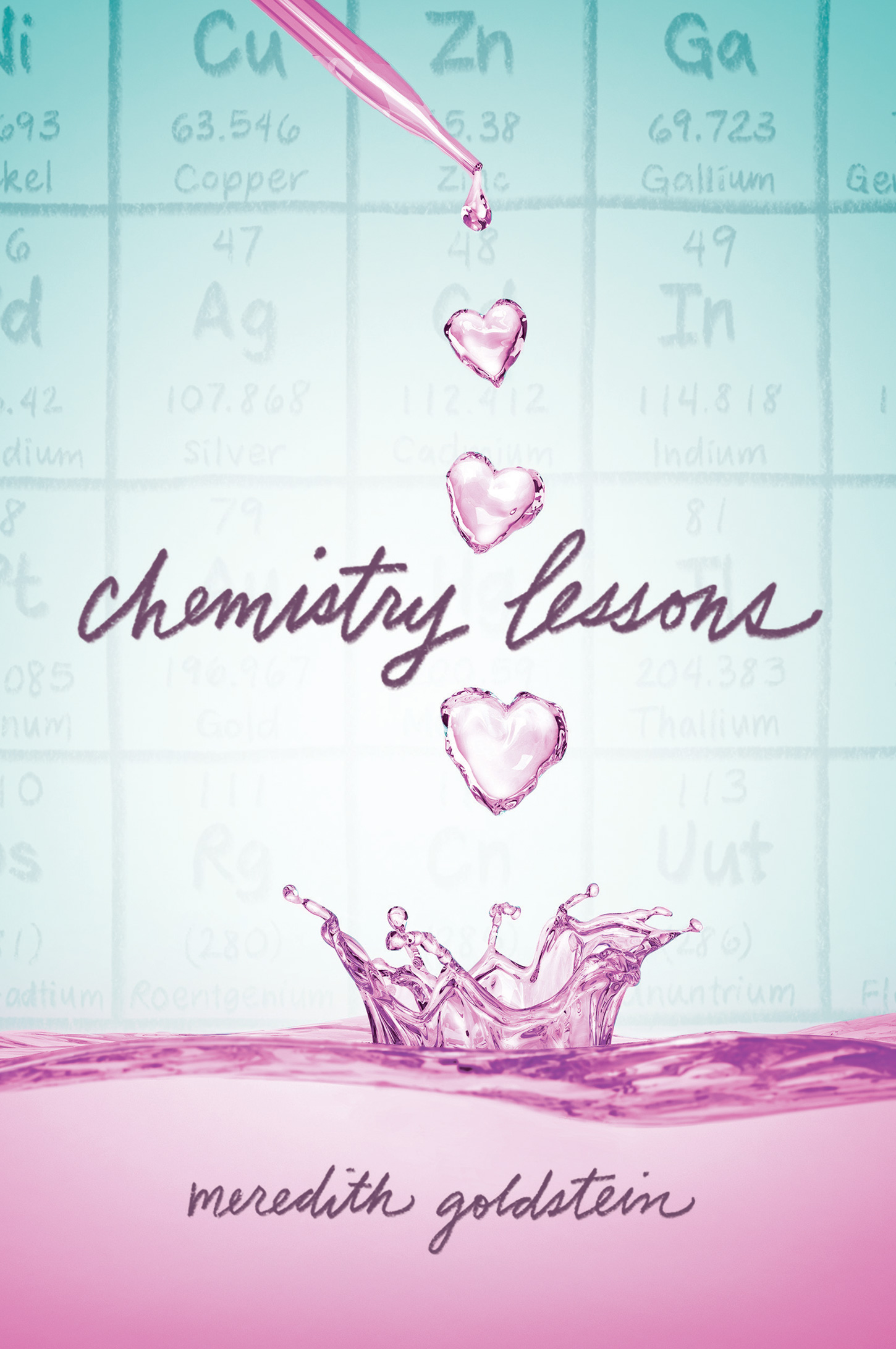