Winner of the PEN/Malamud Award for Short Stories

Winner of the PEN/Malamud Award for Short Story

In these “vivid, entertaining, philosophical dispatches” (San Francisco Chronicle), literary legend Le Guin weaves together influences as wide-reaching as Borges, The Little Prince, and Gulliver’s Travels to examine feminism, tyranny, mortality and immortality, art, and the meaning—and mystery—of being human.

Sita Dulip has missed her flight out of Chicago. But instead of listening to garbled announcements in the airport, she’s found a method of bypassing the crowds at the desks, the nasty lunch, the whimpering children and punitive parents, and the blue plastic chairs bolted to the floor: she changes planes.

Changing planes—not airplanes, of course, but entire planes of existence—enables Sita to visit societies not found on Earth. As “Sita Dulip’s Method” spreads, the narrator and her acquaintances encounter cultures where the babble of children fades over time into the silence of adults; where whole towns exist solely for holiday shopping; where personalities are ruled by rage; where genetic experiments produce less than desirable results. With “the eye of an anthropologist and the humor of a satirist” (USA Today), Le Guin takes readers on a truly universal tour, showing through the foreign and alien indelible truths about our own human society.

URSULA K. LE GUIN was born in Berkeley, California, in 1929, and passed away in Portland, Oregon, in 2018. She published over sixty books of fiction, nonfiction, poetry, drama, children's literature, and translation. She was the recipient of a National Book Award, six Hugo and five Nebula awards, and was inducted into the American Academy of Arts and Letters.

KAREN JOY FOWLER is the author of six novels and four short story collections, including We Are All Completely Beside Ourselves and Black Glass. She is the winner of the 2014 PEN/Faulkner Award, a finalist for the Man Booker Prize, and has won numerous Nebula and World Fantasy Awards.

ERIC BEDDOWS has won the Amelia Frances Howard-Gibbon Award and the Governor General's Literary Award, among others.

THE RANGE OF THE AIRPLANE-a few thousand miles, the other side of the world, coconut palms, glaciers, the poles, the Poles, a lama, a llama, etc.-is pitifully limited compared to the vast extent and variety of experience provided, to those who know how to use it, by the airport.

Airplanes are cramped, jammed, hectic, noisy, germy, alarming, and boring, and they serve unusually nasty food at utterly unreasonable intervals. Airports, though larger, share the crowding, vile air, noise, and relentless tension, while their food is often even nastier, consisting entirely of fried lumps of something; and the places one has to eat it in are suicidally depressing. On the airplane, everyone is locked into a seat with a belt and can move only during very short periods when they are allowed to stand in line waiting to empty their bladders until, just before they reach the toilet cubicle, a nagging loudspeaker harries them back to belted immobility. In the airport, luggage-laden people rush hither and yon through endless corridors, like souls to each of whom the devil has furnished a different, inaccurate map of the escape route from hell. These rushing people are watched by people who sit in plastic seats bolted to the floor and who might just as well be bolted to the seats. So far, then, the airport and the airplane are equal, in the way that the bottom of one septic tank is equal, all in all, to the bottom of the next septic tank.

If both you and your plane are on time, the airport is merely a diffuse, short, miserable prelude to the intense, long, miserable plane trip. But what if there's five hours between your arrival and your connecting flight, or your plane is late arriving and you've missed your connection, or the connecting flight is late, or the staff of another airline are striking for a wage-benefit package and the government has not yet ordered out the National Guard to control this threat to international capitalism so your airline staff is trying to handle twice as many people as usual, or there are tornadoes or thunderstorms or blizzards or little important bits of the plane missing or any of the thousand other reasons (never under any circumstances the fault of the airlines, and rarely explained at the time) why those who go places on airplanes sit and sit and sit and sit in airports, not going anywhere?

In this, probably its true aspect, the airport is not a prelude to travel, not a place of transition: it is a stop. A blockage. A constipation. The airport is where you can't go anywhere else. A nonplace in which time does not pass and there is no hope of any meaningful existence. A terminus: the end. The airport offers nothing to any human being except access to the interval between planes.

It was Sita Dulip of Cincinnati who first realised this, and so discovered the interplanar technique most of us now use.

She had discovered that, by a mere kind of twist and a slipping bend, easier to do than to describe, she could go anywhere-be anywhere-because she was already between planes.

She found herself in Strupsirts, that easily accessible and picturesque though somewhat three-dimensional region of waterspouts and volcanoes, still a favorite with beginning interplanary travelers. In her inexperience she was nervous about missing her flight and stayed only an hour or two before returning to the airport. She saw at once that, on this plane, her absence had taken practically no time at all.

Delighted, she slipped off again and found herself in Djeyo. She spent two nights at a small hotel run by the Interplanary Agency, with a balcony overlooking the amber Sea of Somue. She went for long walks on the beach, swam in the chill, buoyant, golden water-"like swimming in brandy and soda," she said-and got acquainted with some pleasant visitors from other planes. The small and inoffensive natives of Djeyo, who take no interest in anyone else and never come down to the ground, squatted high in the crowns of the alm-palms, bargaining, gossiping, and singing soft, quick love songs to one another. When she reluctantly returned to the airport to check up, nine or ten minutes had passed. Her flight was soon called.

She flew to Denver to her younger sister's wedding. On the flight home she missed her connection at Chicago and spent a week on Choom, where she has often returned since. Her job with an advertising agency involves a good deal of air travel, and by now she speaks Choomwot like a native.

Sita taught several friends, of whom I am happy to be one, how to change planes. And so the technique, the method, has gradually spread out from Cincinnati. Others on our plane may well have discovered it for themselves, since it appears that a good many people now practice it, not always intentionally. One meets them here and there.

While staying with the Asonu I met a man from the Candensian plane, which is very much like ours, only more of it consists of Toronto. He told me that in order to change planes all a Candensian has to do is eat two dill pickles, tighten his belt, sit upright in a hard chair with his back not touching the back, and breathe ten times a minute for about ten minutes. This is enviably easy, compared to our technique. We (I mean people from the plane I occupy when not traveling) seem unable to change planes except at airports.

The Interplanary Agency long ago established that a specific combination of tense misery, indigestion, and boredom is the essential facilitator of interplanary travel; but most people, from most planes, don't have to suffer the way we do.

The following reports and descriptions of other planes, given me by friends or written from notes I made on my own excursions and in libraries of various kinds, may induce the reader to try interplanary travel; or if not, they may at least help to pass an hour in an airport.

All rights reserved. No part of this publication may be reproduced or

transmitted in any form or by any means, electronic or mechanical, including

photocopy, recording, or any information storage and retrieval system,

without permission in writing from the publisher.

“An accomplished stylist . . . Even Le Guin's overtly cautionary tales have a delicacy that disarms resistance. Outstanding among these are the almost unbearably poignant ‘Fliers of Gy’ and ‘The Island of the Immortals,’ which break new ground in exploring the dangers of getting what you wish for.” — New York Times Book Review

“Changing Planes is a fantastical travel guide, reminiscent of Gulliver ’s Travels, in which the narrator visits fifteen planes and describes the people, language, and customs with the eye of an anthropologist and the humor of a satirist.” — USA Today

“A welcome collection for the many fans of speculative fiction’s multiple-award-winning grande dame.” — Seattle Times

“These sixteen stories are distilled Le Guin, a series of spare, conceptual parables strung with witty and deadly serious satire. In her impeccable prose, without rancor but also without illusion, Le Guin casts a clear eye on this world of ours, and delineates all the heinous and dazzling things it is and was and may become.” — Bloomsbury Review

“At their strongest, these stories by the high priestess of American speculative fiction are Borgesian in their evocative abstraction and inventiveness . . . Either way, their almost childlike simplicity is deceptive. The more you look, the more the strange worlds they conjure investigate some aspect of our own—from the inherent instability of selfhood and language to looming eco-catastrophe—as seen through a vibrant, satiric imagination darkly.” — Time Out New York

“Changing Planes is fun, accessible to all kinds of readers, and jammed with ideas, which Le Guin obviously has in abundance.” — Boulder Daily Camera

“This is . . . like everything from Le Guin’s pen, a delight.” — Publishers Weekly

“The narrative device that Le Guin uses in Changing Planes to connect the stories is the kind of clever contrivance her faithful readers have come to expect from her fertile imagination. In the telling of these tales, Le Guin—or her narrator, at least—is like an anthropologist, exploring with curiosity and reporting with as much objectivity as possible . . . [Le Guin's] stories are told with an elegant simplicity that belies their message, yet the message is invariably present.” — BookPage

“Her writing feels more urgent than ever.” — Zoe Carpenter, The Nation

“Like all great writers of fiction, Ursula K. Le Guin creates imaginary worlds that restore us, hearts eased, to our own.” — Boston Globe

“In recent years, no [writer] inside the field of science fiction or outside of it [has] done more to create a modern conscience than . . . Ursula K. Le Guin.” — New Republic

“She wields her pen with a moral and psychological sophistication rarely seen.” — Newsweek

“Her characters are complex and haunting, and her writing is remarkable for its sinewy grace.” — Time 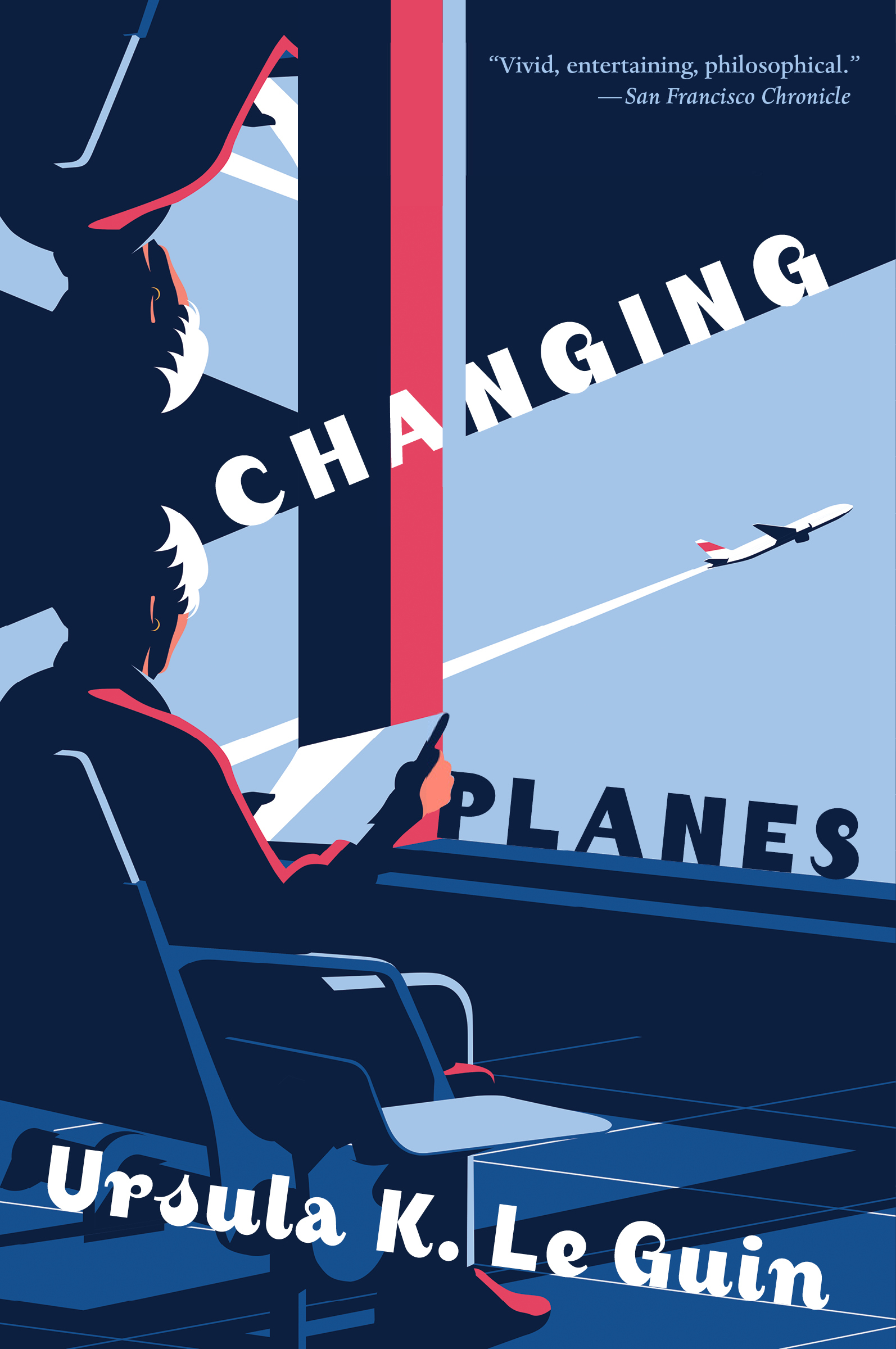