From an award-winning young author, a novel following a feisty heroine’s idiosyncratic quest to reclaim her past by mining the wisdom of her literary icons—even as she navigates the murkier mysteries of love.

Winner of the PEN/Faulkner Award for Fiction

Winner of the John Gardner Award for Fiction

Zebra is the last in a line of anarchists, atheists, and autodidacts. Alone and in exile, she leaves New York for Barcelona, retracing the journey she and her father made from Iran to the United States years ago. Books are her only companions—until she meets Ludo. Their connection is magnetic, and fraught. They push and pull across the Mediterranean, wondering if their love—or lust—can free Zebra from her past. Starring a heroine as quirky as Don Quixote, as brilliant as Virginia Woolf, as worldly as Miranda July, and as spirited as Lady Bird, Call Me Zebra is “hilarious and poignant, painting a magnetic portrait of a young woman you can’t help but want to know more about” (Harper’s Bazaar).

AZAREEN VAN DER VLIET OLOOMI is the author of the novels Fra Keeler and Call Me Zebra and an assistant professor in the MFA Program in Creative Writing at the University of Notre Dame. She is the winner of a 2015 Whiting Award, a National Book Foundation "5 Under 35" honoree, and the recipient of a Fulbright fellowship, as well as residency fellowships from MacDowell and Ledig House. Her work has appeared in the Paris Review,Guernica,Granta,BOMB, and elsewhere. She lives in South Bend, Indiana.

Praise for Call Me Zebra

Winner of the PEN/Faulkner Award for Fiction

Winner of the John Gardner Award for Fiction

Longlisted for the PEN/Open Book Award

An Amazon Best Book of the Year

Named a Best Book by:

"In this crackling novel, a bookish Iranian in exile retraces the journey she took with her father, and finds love along the way." —The New York Times Book Review, Paperback Row

"Once in a while a singular, adventurous and intellectually humorous voice appears that takes us on an inescapable journey. Azareen Van der Vliet Oloomi’s Call Me Zebra is a library within a library, a Borges-esque labyrinth of references from all cultures and all walks of life. In today’s visual Netflix world, Ms. Van der Vliet Oloomi’s novel performs at the highest of levels in accomplishing only what the written novel can show us.” —PEN/Faulkner Award for Fiction citation, from judges Joy Williams, Percival Everett, and Ernesto Quiñonez

"If you don’t know this name yet, you should: Van der Vliet Oloomi, a National Book Award '5 Under 35' honoree, returns with this absurdist, unwieldy, and bracingly intelligent story." —Entertainment Weekly

"In a story that might otherwise be self-serious, Van der Vliet Oloomi resists the standard redemption arc, infusing her protagonist with a darkly comic neuroticism."—The New Yorker

"Acerbic wit and a love of literature color this picaresque novel...By turns, hilarious and poignant, painting a magnetic portrait of a young woman you can't help but want to know more about." —Harper's Bazaar

"Hop on board with anarchist, atheist, and autodidact Zebra as she bounds on her hilarious and frenetic adventure through literature and across the globe, always in search of deeper connection." —Fodor's

"Not many authors are compared to Borges, Cervantes, and Kathy Acker all in one breath, but that is exactly what we're dealing with here: Azareen Van der Vliet Oloomi is a twisted, twisty genius, whose latest novel is a wild, trippy ride across countries…[Zebra] is in possession of an inimitable…voice, but it’s all the better to help her—and us—navigate the chaos of this collapsing world." —Nylon

“What Maggie Nelson’s The Argonauts did for gender and sexuality, Call Me Zebra does for the experience of exile, deftly threading the narrative with theory while also using theory to pull the reader in. Though Call Me Zebra happens to be fiction, both books are stuffed with complex ideas made irresistible and lyric…Van der Vliet Oloomi sets herself the tall task of writing a precocious narrator, a self-proclaimed ‘expert connoisseur of literature,’ a narrative path that’s littered with prospective pitfalls. In less capable hands, this could easily be annoying or unconvincing, but Zebra is unvaryingly brilliant and deadpan funny…One of the greatest components of Call Me Zebra is how funny it is…Call Me Zebra also features quietly devastating moments when Zebra’s emotional defenses fall away, when we are reminded that because of tyranny, war, and poverty, she has been left entirely alone to process her family’s eradication from the earth… Zebra is the smartest narrator you will encounter this year.” —Los Angeles Review of Books

“[Van der Vliet Oloomi] is one of a new breed of erudite, conceptually ambitious authors emerging in an industry long dominated by accessible, character-driven realism…In Call Me Zebra [she] comes into her own…channel[ing] Friedrich Nietzsche, Kathy Acker, Maurice Blanchot and dozens more past masters to conjure a literary landscape of exile where the great bodies of work come and go...Wildly innovative...The all-in author of Zebra engages her mind, body, and soul.”—San Francisco Chronicle

"Bibi Abbas Abbas Hosseini, the protagonist of Call Me Zebra, is probably more similar to Don Quixote and Ignatius Reilly of A Confederacy of Dunces than she is to you and I. Partly, that’s because she stems from a family that prizes knowledge of literature above all other practical skills. And it’s partly because her life is a picaresque adventure on par with some of the greats in literature, weaving in dark family tragedy (she’s orphaned by the time she’s 23) with international globetrotting and grand acts of romantic pursuit. Call Me Zebra is a novel in the best sense of the word. It’s filtered entirely through an idiosyncratic mind, who thinks in sentences that are sharp and smart and utterly ridiculous." —Refinery29

"This is a miss your stop on the subway and ignore your to-do list kind of book.” —The Millions

"It’s difficult to pull off both depth and wit, but Azareen Van der Vliet Oloomi masters both in Call Me Zebra." —Bitch

"One of the most original stories we’ve read in a long time...A delight for the true bibliophile." —Hello Giggles

"Brilliant and heart-wrenching...In a lyric, funny, and irresistible manner, Azareen Van der Vliet Oloomi distills the ideas of Friedrich Nietzsche, Walter Benjamin, Rainer Maria Rilke, Miguel de Cervantes, and an army of other great writers and thinkers through the mind and experience of Zebra, a strong-willed exile from Iran fighting to make sense of her family history of displacement and anguish." —Literary Hub

"For every human whose first love in life will always be literature...A beautiful depiction of first love, legacy, and our desire to feel connected to where (and who) we come from." — 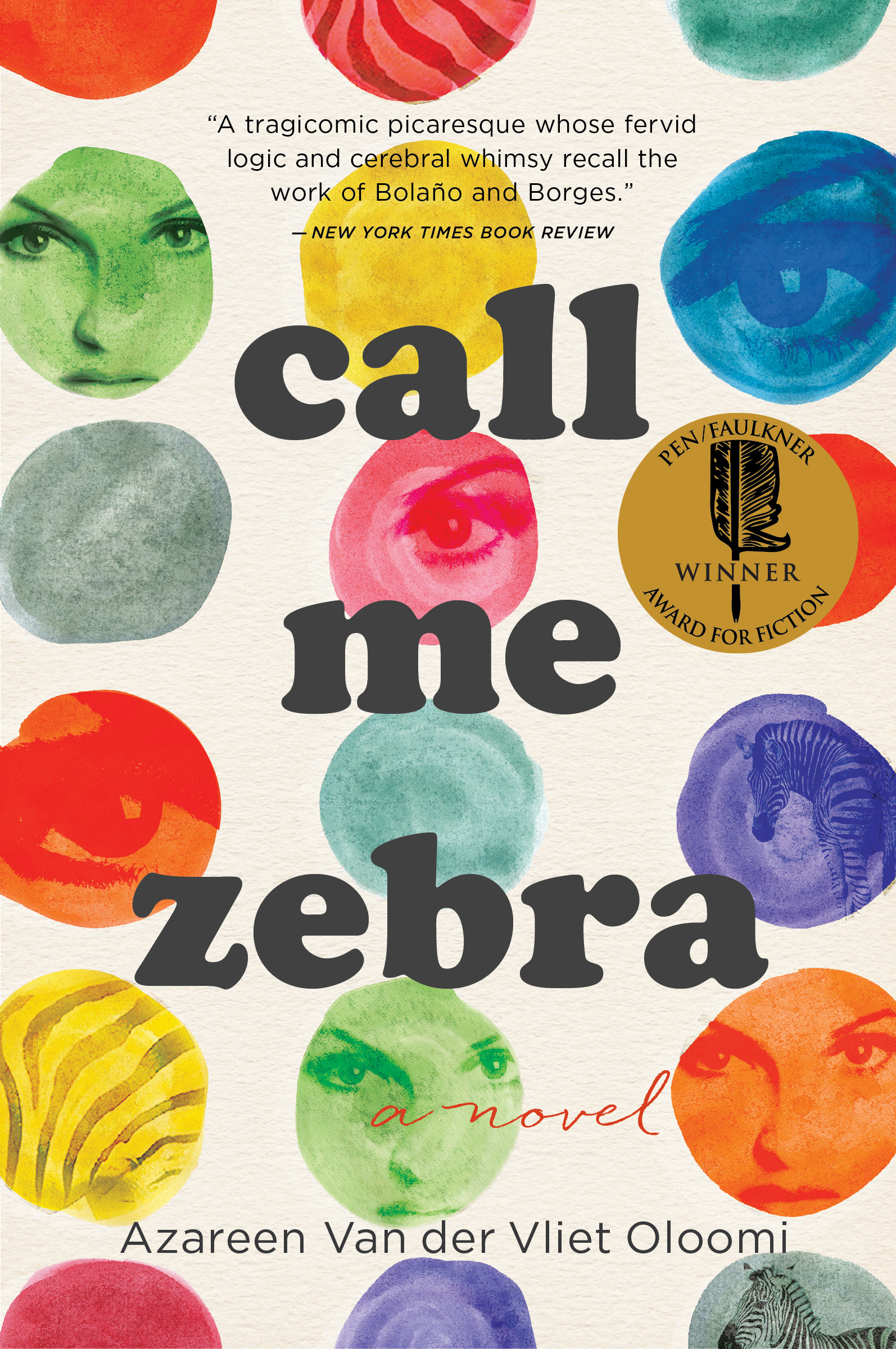