“Saramago juxtaposes an eminently readable narrative of work and poverty, class and desire, knowledge and timelessness—one in which God, too, as he faces Cain in the wake of Noah's Ark, emerges as far more human than expected.” —San Francisco Chronicle

In this, his last novel, José Saramago daringly reimagines the characters and narratives of the Old Testament, recalling his provocative The Gospel According to Jesus Christ. His tale runs from the Garden of Eden, when God realizes he has forgotten to give Adam and Eve the gift of speech, to the moment when Noah’s Ark lands on the dry peak of Ararat. Cain, the despised, the murderer, is Saramago’s protagonist.

Condemned to wander forever after he kills his brother Abel, Cain makes his way through the world in the company of a personable donkey. He is a witness to and participant in the stories of Isaac and Abraham, the destruction of the Tower of Babel, Moses and the golden calf, the trials of Job. The rapacious Queen Lilith takes him as her lover. An old man with two sheep on a rope crosses his path. And again and again, Cain encounters a God whose actions seem callous, cruel, and unjust. He confronts Him, he argues with Him. “And one thing we know for certain,” Saramago writes, “is that they continued to argue and are arguing still.”

A startling book—sensual, funny—and in all ways a fitting end to Saramago’s extraordinary career.

“A winkingly blasphemous retelling of the Old Testament . . . Saramago, playfully stretching his chatty late style, pokes holes in the stated logic of the Biblical God throughout the novel.” —The New Yorker

When the lord, also known as god, realized that adam and eve, although perfect in every outward aspect, could not utter a word or make even the most primitive of sounds, he must have felt annoyed with himself, for there was no one else in the garden of eden whom he could blame for this grave oversight, after all, the other animals, who were, like the two humans, the product of his divine command, already had a voice of their own, be it a bellow, a roar, a croak, a chirp, a whistle or a cackle. In an excess of rage, surprising in someone who could have solved any problem simply by issuing another quick fiat, he rushed over to adam and eve and unceremoniously, no half-measures, stuck his tongue down the throats of first one and then the other. From the texts which, over the centuries, have provided a somewhat random record of those remote times, be it of events that might, at some future date, be awarded canonical status and others deemed to be the fruit of apocryphal and irredeemably heretical imaginations, it is not at all clear what kind of tongue was being referred to here, whether the moist, flexible muscle that moves around in the buccal cavity and occasionally outside it too, or the gift of speech, also known as language, that the lord had so regrettably forgotten to give them and about which we know nothing, since not a trace of it remains, not even a heart engraved on the bark of a tree, accompanied by some sentimental message, something along the lines of I love eve. It’s likely that the lord’s violent assault on his offspring’s silent tongues had another motive, namely, given that, in principle, you can’t have one without the other, that of putting them in contact with the deepest depths of their physical being, the so-called perturbations of the inner self, so that, in future, they could, with some authority, speak of those dark and labyrinthine disquiets out of whose window, the mouth, their tongues were already peering. Well, anything is possible. With the praiseworthy scrupulousness of any skilled craftsman, making up with due humility for his earlier negligence, the lord wanted to make sure that his mistake had been corrected, and so he asked adam, What’s your name, and the man replied, I’m adam, your first-born. Then the creator turned to the woman, And what is your name, I’m Eve, the first lady, she replied rather unnecessarily, since there was no other. The lord was satisfied and bade farewell with a fatherly See you later, then, and went about his business. And, for the first time, adam said to eve, Let’s go to bed.

Seth, their third child, will only come into the world one hundred and thirty years later, not because his mother’s womb required that amount of time to complete the making of a new descendant, but because the gonads of father and mother, the testes and ovaries respectively, had taken more than a century to mature and to develop sufficient generative power. It must be pointed out to our more impatient readers, first, that the fiat was given once and once only, second, that men and women are not sausage machines, and, third, that hormones are very complicated things, they can’t just be produced from one day to the next, nor can they be found in pharmacies or supermarkets, you have to let matters take their course. Before seth came into the world, cain had already arrived, followed, shortly afterwards, by abel. By the way, one must not underestimate the intense boredom of all those years spent without neighbors, without distractions, without some small child crawling about between kitchen and living room, with no other visitors but the lord, and even his visits were few and very brief, interspersed by long intervals of absence, ten, fifteen, twenty, fifty years, so we can easily imagine that the sole occupants of that earthly paradise must have felt like poor orphans abandoned in the forest of the universe, not that they would have been able to explain what the words orphan and abandoned meant. It’s true that every now and then, although again not with any great frequency, adam would say to eve, Let’s go to bed, but their conjugal routine, aggravated, in their case, due to inexperience, by the complete lack of alternative positions to adopt, proved to be as destructive as an invasion of woodworm to a roof beam. You hardly notice anything from the outside, just a little dust here and there falling from tiny holes, but, inside, it’s quite a different matter, and the collapse of something that had seemed so sturdy will not be long in coming. In such situations, there are those who say that a child can have an enlivening effect, if not on the libido, which is the work of chemicals far more complex than merely learning how to change a diaper, then at least on feelings, which, you must admit, is no small gain. As for the lord and his sporadic visits, the first was to see if adam and eve had had any problems setting up house, the second to find out what benefits they had gleaned from their experience of country life and the third to warn them that he would not be back for a while, because he had to do the rounds of the other paradises that exist in the heavens. Indeed, he would not appear again until much later, on a date that has not been recorded, in order to expel the unhappy couple from the garden of eden for the heinous crime of having eaten of the fruit of the tree of the knowledge of good and evil. This episode, which gave rise to the first definition of a hitherto unknown concept, original sin, has never been satisfactorily explained. Firstly, even the most rudimentary of intelligences would have no difficulty in grasping that being properly informed about something is always preferable to being ignorant, especially in such delicate matters as good and evil, which could put anyone at risk, quite unwittingly, of being consigned to eternal damnation in a hell that had not yet been invented. Secondly, the lord showed a lamentable lack of foresight, because if he really didn’t want them to eat that fruit, it would have been easy enough simply not to have planted the tree or to have put it somewhere else or surrounded it with barbed wire. Thirdly, it wasn’t because they had disobeyed god’s instructions that adam and eve discovered they were naked. They were already stark naked when they went to bed, and if the lord had never noticed such an evident lack of modesty, the fault must lie with a father’s blindness, an apparently incurable infliction that prevents us from seeing that our children are, after all, neither better nor worse than all the others.

A point of order. Before we continue with this instructive and definitive history of cain, undertaken with unprecedented boldness, it might be advisable to introduce some clarity into the chronology of events. So, let us begin by clearing up certain malicious doubts about adam’s ability to make a child when he was one hundred and thirty years old. At first sight, if we stick to the fertility indices of modern times, no, he clearly wouldn’t, but during the world’s infancy, those same one hundred and thirty years would have represented a vigorous adolescence that not even the most precocious of casanovas would have sneered at. It is, moreover, worth remembering that adam lived until he was nine hundred and thirty years old, thus narrowly missing being drowned in the great flood, for he died when lamech was still alive, lamech being the father of noah, the future builder of the ark. He would, therefore, have had the time and leisure to make all the children he did make and many more if he had so wished. As we said earlier, adam’s second child, born after cain, was abel, a handsome, fair-haired boy, who, having been the object of the best proofs of the lord’s esteem, met a very sticky end indeed. The third child,

Reviews
"Cain's vagabond journey builds to a stunning climax that, like the book itself, is a fitting capstone to a remarkable career."

"Saramago transforms familiar stories boldly, but with an intricate respect for their power and for the mysterious power of storytelling itself. Far from merely inverting the biblical tales or turning them inside out, he folds and refolds them in a prismatic, shadowly light."-Robert Pinsky, New York Times Book Review 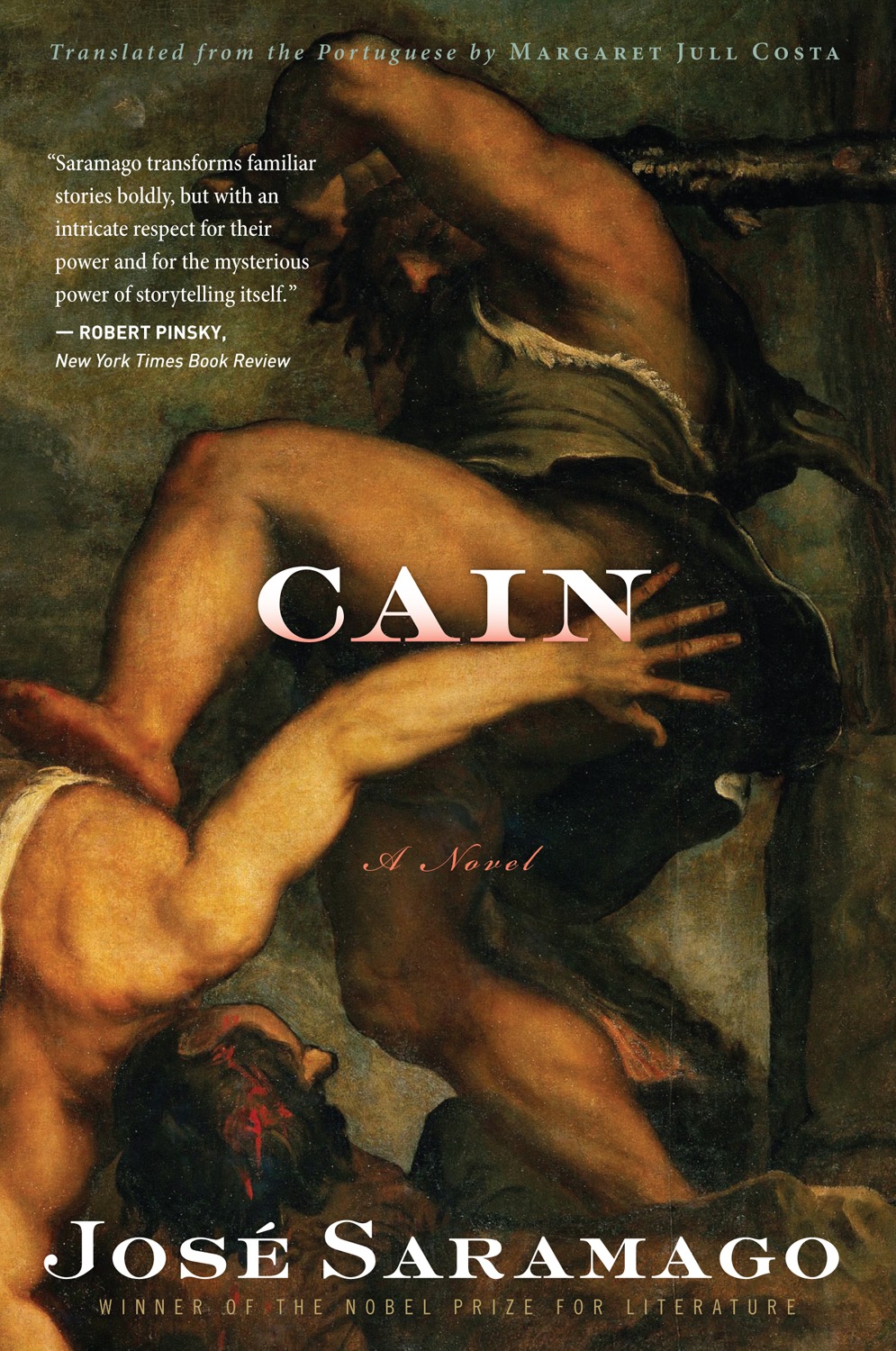