Ranging from tickys and double-kisses to jump shots and diamond systems, Byrne's Complete Book of Pool Shots takes players on an accelerated trip from pool kindergarten to graduate school. Players of every skill level will find ways to improve their game and get ahead of their opponents with 350 of Byrne's clever and intricately diagrammed moves—many of which are outlined here for the first time by one of the game's most masterful players and teachers.

About the author
Robert Byrne

Robert Byrne has won numerous tournaments including the National Senior and National Amateur tournaments in three-cushion billiards. Named "best billiard writer" by Billiards Digest, his books and videos on pool have sold nearly a million copies. Inducted into the Billiard Congress of America's Hall of Fame in 2000, he lives in Dubuque, Iowa.

While this book is aimed mainly at players who can already handle a cue fairly well, there is always the possibility that it will fall into the hands of a beginner. For that reason, I will start with a brief review of fundamentals. Newcomers to the game should take a lesson or two from a qualified instructor and read one or more of the many fine instructional books now available, some of which I wrote myself. Getting past the beginner stage is impossible unless you know how to stand, hold the cue, stroke, and aim, and there's more to those seemingly simple acts than you might think.

If you are unfamiliar with pool instructional materials and have never studied the game before, a good place to start is with Byrne's New Standard Book of Pool and Billiards, which covers fundamentals in much more detail than you will find here and which continues to advanced concepts. If you'd rather watch than read, try Byrne's Standard Video of Pool, Volume I and Volume II. Both are available at billiard supply stores. Short descriptions of these and other books and tapes can be found on my Web site at byrne.org.

An important tip The most important tip is the one at the end of your cue. If it flattens out or mushrooms, trim it with a razor blade and sand it off so it is flush with the sides of the ferrule (the plastic collar onto which the tip is glued). Be very careful not to scratch or sand the ferrule or the wood of the shaft.

Hold it Hold the cue as level as possible unless you are deliberately trying to make the cueball curve or jump. When the tip is halfway from the cueball to your bridge hand during your warm-up strokes, your right forearm (assuming you are right-handed) should be aimed straight down at the floor. Hold the cue firmly but not tightly.

Chalk up Applying chalk to the tip before every shot is not too often, but it's not necessary to chalk up so frequently when hitting the cueball in the center. If the tip won't hold chalk, rough it up with a piece of sandpaper or one of the many scuffers designed for the job. Don't spin the cue into the chalk; instead, rock the chalk back and forth on the tip or brush the flat surface of the chalk across the tip.

Crouch Some top players bend down so low when aiming that their chins touch the cue. Most have their chins no more than a foot above the cue. If you are having trouble pocketing balls, it may be that you aren't bending over far enough to aim the cue like a rifle.

Aim Really aim, don't just go through the motions. One way is to imagine where the cueball must be at the moment of contact with the object ball, then aim through the center of the imagined cueball. Another way is to keep refining your aim until the hit looks right, neither too thick nor too thin. Fans of geometry and precision might like the method explained in Diagram 1.

1 The geometry of aiming

On every shot that's not straight in, an allowance for throw must be made. "Throw" is the term used to describe how a shot is thrown slightly off line by the frictional forces during the collision. For more, see Section 5.

Follow straight through The tip is only in contact with the cueball for one millisecond. What you do with your cue after that can't affect the cueball, but you should develop the habit of following straight through. If your cue normally rises after contact or swerves toward the side of the English, then you will have a harder time hitting the cueball exactly where you want to and will miscue more often than you should. To develop a straight stroke, try picking a spot on the cloth six inches or so beyond the end of the cue and making the cue tip stop directly on it or above it after hitting the cueball.

Stay down During your warm-up strokes and when hitting the cueball, don't bob your head or move anything except your forearm. Let the cue follow straight through, then freeze until the cueball is well on its way. Extraneous body movement during the stroke makes precision pool impossible. Your elbow should remain frozen in space until the end of the follow-through.

Watch your eyes When aiming, your eyes will move back and forth a few times between the cueball and the object ball. Almost all top players have their eyes on the object ball-or a point of aim on a cushion-when they pull the trigger. An exception might be on a very easy shot where the critical factor is the amount of spin on the cueball; then you might focus on the cueball to make sure you hit it where you want to.

Beware of English A majority of shots can be made without any spin (English) on the cueball. Four problems arise when hitting the cueball off-center left or right. One is "squirt," which causes the cueball to travel slightly off line in a direction opposite the English. Another is that a cueball with sidespin will throw the object ball off line because of the friction between the balls during contact. The third is that unless the cue is exactly level, the cueball's path will curve on its way to the target. Finally, using more than a little sidespin increases the chances of a miscue. On the other hand, English is essential on some shots in order to get a good shot at the next ball.

Follow and draw are essential elements in cueball control. Both depend on hitting the cueball above or below center on the vertical axis, although sidespin can be applied as well. You'll learn the technique faster if you understand a bit of the underlying physics.

Follow If a cueball rolling naturally down the table strikes an object ball full in the face, the cueball will stop dead in its tracks for an instant, then its continuing rotation, which is reduced but not eliminated by the impact, will cause the cueball to move forward, "following" the object ball.

When the cue tip strikes the cueball halfway from the center to the top (to be precise, 70 percent of the diameter up from the bottom) on the vertical axis, the cueball will start with natural roll immediately. Natural roll means that there is no slippage between the ball and the cloth. While it is possible to hit the cueball slightly higher than 70 percent of its diameter without miscuing, it is impossible to demonstrate in practice that doing so will create extra topspin. In other words, for practical purposes it is impossible to strike a cueball so high that it begins its movement with more rotation than natural roll. The distance the cueball rolls after it hits an object ball, then, (provided the 70 percent point is where the tip hit the cueball) depends only on how hard the cueball is struck.

PRAISE FOR BYRNE'S NEW STANDARD BOOK OF POOL AND BILLIARDS

"The best book ever written on both pool and billiards."--Michael Shamos, curator, the Billiard Archive

"Byrne is to billiards what Shakespeare is to theater." --Jerry Karsh, president, U.S. Billiards Association 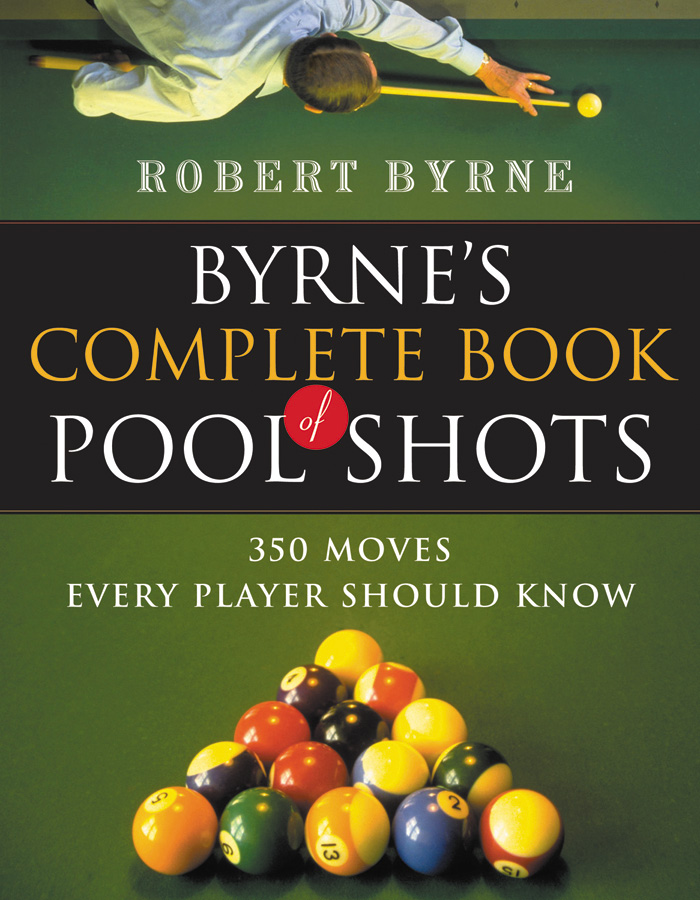