We Were Liars meets Riverdale with a supernatural twist in this timely #metoo thriller about mean girls, murder, and race in a quiet Midwestern suburb.

We Were Liars meets Riverdale with a supernatural twist in this timely #metoo thriller about mean girls, murder, and race in a quiet Midwestern suburb.

Violet Choudhury may be part of the popular clique at school, but as one of a handful of brown girls in a small Illinois town, all she really wants to do is blend in and disappear. Unfortunately for her, she’s got a knack for seeing spirits, including the dead—something she’s tried to ignore all her life. But when the queen bee of Violet’s cheerleading squad ends up dead following a sex tape that’s not as consensual as everyone wants to believe, Violet's friends from the spirit world decide it’s the perfect time for Violet to test her skills and finally accept the legacy of spiritual fighters from whom she’s descended. Her mission? Find the killer.

Or else she’s next.

About the author
Mintie Das

Mintie Das was born in India, raised in Macomb, Illinois and now lives in Finland. She's been traveling the globe since childhood and always finds inspiration in the discovery of the unknown. Mintie spent twelve years organizing international events for governments around the world and the UN. Mintie's Storm Sisters: The Sinking World was translated into seven languages. Brown Girl Ghosted marks her US debut. Instagram: @MintieDas Twitter: @MintieDas Website: mintiedas.com

DEAD PEOPLE ARE SCARY. Even if my nanny has spent my entire life trying to convince me otherwise. Granted, at sixteen, I’m too old to have a nanny. But that is beside the point at this particular moment, as I find myself staring down at the corpse of Dr. Jenkins.

He’d been Meadowdale’s most popular pediatric dentist. I hadn’t seen him since losing my last baby tooth but I remember the way his face turned bright red when he laughed. That and the fact that he always commended me for being able to open my mouth wide enough to accommodate his sausage fingers.

I glance down at Dr. Jenkins’s hands, which are folded one on top of the other and resting across his expansive belly. It is the kind of unnatural pose that you never see people in unless they’re dead. His ruddy complexion is plastered over with thick, waxy makeup, and his eyes and mouth are glued shut. The result is a Dr. Jenkins that looks like an eerie, artificial version of his living self. Like those creepy wax figures I saw once at Madame Tussauds.

“Kiss him again,” Naomi Talbert commands in a cool, low voice that sends goose bumps up my arms. Here we are in front of a cadaver and still, Naomi manages to be the most menacing thing in the room.

All twelve of us girls from the Meadowdale High School poms team, unaffectionately known as the Squad, stand around the doublewide pine rose casket where Dr. Jenkins lies. I can bet that at least eleven out of twelve of us desperately want to be anywhere but here in the parlor of the Talbert Funeral Home. But what we want hardly matters since Naomi, cheer captain and all-around head bitch, summoned us for an official team meeting at her house.

I draw a circle with the tip of my sneaker in the moss-green carpet. This isn’t the first time that I’ve seen a dead person. Up until three years ago, I saw them quite frequently. Thankfully, not in the same wacked way as that poor boy from The Sixth Sense who was haunted by dead strangers 24/7. My visitors were merely dead relatives who came and went. These days, they don’t visit at all. Or at least, that’s what I’ve convinced myself of.

Naomi narrows her steel-blue-gray eyes at Madison Kingsley. “I said kiss him again.”

I’ve also seen my fair share of dead bodies here in this very parlor and that one time when we snuck downstairs to the morgue. I used to be a frequent guest at Naomi’s house, back in the days before popularity, boys, and the amount of Instagram followers you had determined if you were good enough to be Naomi’s friend. In fact, in that first year that the Talberts moved to Meadowdale, I was one of the only kids who came over. It seemed that most parents and their children weren’t too keen on sleepovers with the dead. But that quickly changed as the Talberts rose through the town’s social ranks and became Meadowdale royalty with Naomi as the celebrated princess. Nowadays, everyone is just dying to hang with the Talberts.

I shoot a quick glance at Naomi. This morning, she posted a photo of herself wearing those ridiculously tight white jeans she has on and it had already gotten 4,200 likes by lunchtime.

There’s no denying that Naomi fits the mold of the classic hot girl: thick, wild honey-golden mane, lush lips, curves in all the right places, and firm where it matters. She looks like the love child of Gigi Hadid and a pair of Daisy Dukes.

But high schools around the world are filled with beautiful girls. It wasn’t solely good looks that had catapulted Naomi into a league of her own. It was that girls like Naomi had discovered their power and staked their claim to the top prize before the rest of us even realized we were in a competition.

“No way am I doing that again!” Madison shouts as she wipes her mouth with the back of her hand for the umpteenth time.

I exchange eye rolls with Jessica Chang, who is standing on the other side of the coffin. Madison is a freshman and therefore new to the Squad. She doesn’t know that there is no point in taking the high road or standing your ground because no matter what, Naomi always wins. She isn’t just a mean girl. Naomi is the mean girl.

What Madison has to do in order to keep the little social cachet she’s accumulated in the two weeks since school started is suck up her pride and let Naomi humiliate her. That way the budding sociopath will be satisfied (at least temporarily) and we can all finally leave.

“Madison, we’re not going anywhere until you do as I say. I told you to kiss him for thirty seconds and you like barely did it for five,” Naomi counters as though her argument is completely logical.

I sigh. Why does every moment with Naomi feel like a scene from a Lifetime movie? One where the mean girl murders the new pledge in a hazing gone too far and the rest of her minions have to help cover it up.

At some point or another, we’ve all been subjected to Naomi’s tests. Madison is actually getting off kind of easy. Last year, Naomi forced a new recruit to spend an entire hour inside a closed casket.

I arch my neck slightly to peek into the showroom across the hall. Glossy coffins in all makes and models sit out in full display like shiny new automobiles at a car dealership. When he’d renovated this place a few years ago, Mr. Talbert had poured so much money into blinging out the main floor with crystal chandeliers and gold accents that he’d dubbed it “the bank.”

I’ve always thought it was like putting lipstick on a corpse. No amount of designer wallpaper can hide the creepy fact that there’s an actual morgue downstairs.

Those films might have been made way before my time but I firmly believe in applying history (at least movie history) to the present. Basically, any situation that I find myself in can be referred back to a book, movie, or TV show. Who better to help me navigate the perilous world of high school than Judy Blume or John Hughes? This doesn’t mean that I’ve managed teenagehood unscathed. Far from it, actually. But at least I’m still alive, and survival is all I’m hoping for right now.

Big, sloppy tears roll down Madison’s face, forcing me to look away. I don’t need a movie to tell me that I should do something to help the girl. The nausea that is making me want to hurl my lunchtime nachos is enough o...

"Das deftly weaves an intricate and believable set of parallel worlds, expertly using Violet's relationship with the Aiedeo and her own powers to explore tough issues of racism, misogyny, and sexual assault...An ambitious, socially conscious fantasy."—Kirkus

"Major Mean Girls vibes.... A touch of the paranormal, a dash of sass, and loads of high school nostalgia make this an entertaining read." —Booklist

“[A] credible and complex portrait of the challenges of being a teen girl….A promising debut.” —Horn Book 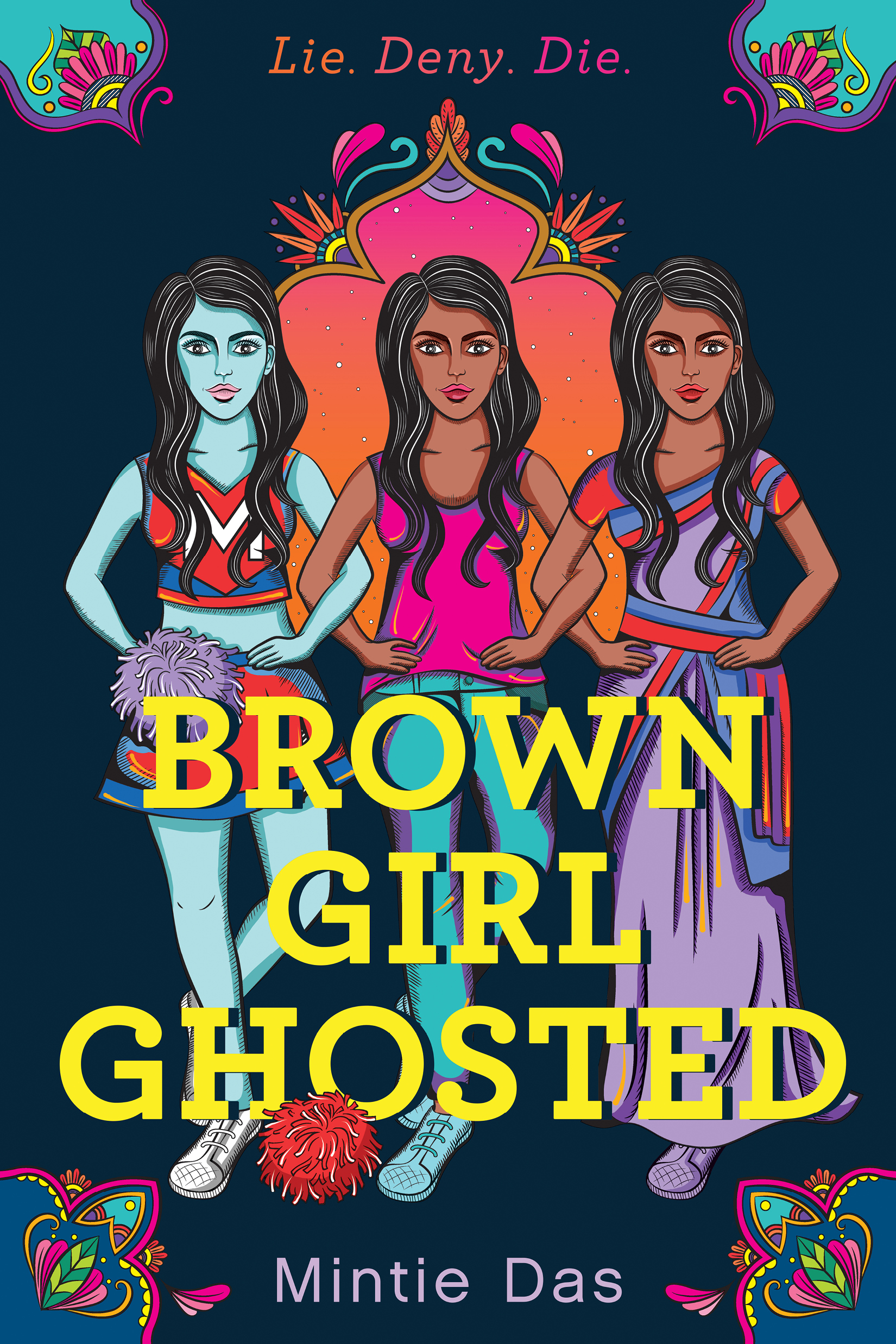