A romantic, cinematic, richly-imagined retelling of the classic Jane Eyre set in space, about seventeen-year-old Stella Ainsley, a mechanic who takes a governess job on board the private ship, the Rochester, and falls in love with the ship's mysterious and troubled captain. For Marissa Meyer and Kiera Cass fans.

“One of the most anticipated YA debuts of 2018, Brightly Burning is a gothic, romantic mystery with hints of Jane Eyre, Marissa Meyer, and Kiera Cass.” —Entertainment Weekly

“Brightly Burning delivers a brooding gothic mystery and a swoony romance, all set in space. Donne’s atmospheric, twisty update of a cherished classic will keep you up late into the night!” —Elly Blake, NYT bestselling author of the Frostblood Saga

Stella Ainsley leaves poverty behind when she quits her engineering job aboard the Stalwart to become a governess on a private ship. On the Rochester, there’s no water ration, more books than one person could devour in a lifetime, and an AI who seems more friend than robot.

But no one warned Stella that the ship seems to be haunted, nor that it may be involved in a conspiracy that could topple the entire interstellar fleet. Surrounded by mysteries, Stella finds her equal in the brooding but kind nineteen-year-old Captain Hugo. When several attempts on his life spark more questions than answers, and the beautiful Bianca Ingram appears at Hugo’s request, his unpredictable behavior causes Stella’s suspicions to mount. Without knowing who to trust, Stella must decide whether to follow her head or her heart.

Alexa Donne’s lush and enthralling reimagining of the classic Jane Eyre, set among the stars, will seduce and beguile you.

About the author
Alexa Donne

The gravity stabilizers were failing again. I glanced up from my sketchpad to see globules of liquid dancing up from my drinking glass. They shimmered red, like droplets of blood, though I knew it was just cherry-flavored nutri-drink. Dammit, that’s my protein ration for the day wasted.

A sigh escaped me, and resignedly I stowed my drawing tablet and stylus in the drawer under my mattress. They would be calling me any minute.

A moment later, right on time: “Stella Ainsley, please report to Area Twelve.” The speaker crackled and popped, as it had done for years. I’d tried to fix it, but on a ship as old as the Stalwart, there was only so much you could do.

I tucked my long hair as best I could into a bun atop my head—?harder than one might think with your hair floating in all directions—?then I grabbed my toolkit and headed into the corridor, half bouncing, half floating with each step. Orange lights flickered on and off, rendering the hallway dimmer than usual, quite the feat, considering Ward Z was generally known as Dark Ward. A few small windows were cut in between brushed-chrome walls that hummed with the shudder of the engines, but starlight was insufficient to light the inside of a ship. Ward Z was the domicile of the Stalwart’s lowliest; why squander precious electricity on waste specialists and mechanics? Most of the ship’s light energy was diverted to the fields. The Stalwart was the single largest provider of food in the fleet. I made a note to fix the light later, nonetheless.

It was a short journey to the supply bay, my quarters being conveniently close; I moved quickly from orange flickering over dull chrome down two levels to the antiseptic white glow of the ship’s belly. The Stalwart was at least clever enough to allocate decent energy reserves to the working parts of the ship; it would do no good to repair essential systems if I couldn’t see.

“There you are,” Jatinder greeted me, wiping a sweat-slicked hand against an equally sweaty forehead. Small droplets floated up from the tips of his fingers. I could barely hear him above the grind of the engines.

“You couldn’t call Karlson?” I asked, bouncing over to the secondary systems panel. “I have to lead class in less than an hour.”

“That’s more than enough time.” Jatinder tsked. “And if it takes longer, Ancient Earth Sciences will wait. I need you and your lovely, tiny hands.”

“My hands are perfectly normal sized,” I mumbled as I set to work on the machine, which alternately whooshed and wheezed. “Did you already try hitting it?” I asked Jatinder, who grunted in the affirmative. Nevertheless, I gave the thing a good smack before resorting to more invasive techniques. But still I floated.

Jatinder attempted small talk as we worked. “You heard about any of your applications?”

“One said no. Two still pending,” I said. “It’s hard to find engineering positions, as you know.” My hand slipped noisily against a pipe.

“Oh, my God,” he said in Hindi, one of the few phrases I’d learned by this point, as he said it so much. “You must think me completely naive.”

“What?” I played dumb, though heat rose to my cheeks at being caught in my lie. Jatinder knew me too well after more than three years of working together.

“We both know you aren’t applying anywhere as an engineer. You hate the job, despite being very good at it—?and not at all humble, I might add—?and unless someone on another ship dies with no apprentice in place, you’re not getting an engineering transfer.” I opened my mouth to reply, but he kept going. “I had hoped you’d get over your foolish dreams of being taken on by some miracle ship to teach, but what is this? Your third round of applications?”

My cheeks burned furiously hot, from embarrassment, anger, and just a bit of despair. Jatinder was pessimistic—?and pedantic—?to a fault, but he wasn’t wrong. Yet I clung to hope that I might escape the fate of being stuck in the bowels of an ailing food-supply ship for the rest of my life. Or worse, being jettisoned down to Earth whenever the Stalwart inevitably failed, doomed to certain death on the frozen planet below. The last ship that had deorbited over a year ago hadn’t been heard from since. Crew probably all froze to death.

“Plenty of ships need teachers,” I offered, my voice small.

He threw me a look that dripped with pity. “Stella, you know the good private ships don’t take on governesses from the likes of the Stalwart. You’re even less likely to get off this place as a governess than you are as an engineer. Unless that family of yours wants you back, you’re stuck here.”

My family? I could hear my aunt Reed’s shrill tone in my ear as if she were standing next to me: You have caused me nothing but grief. I am happy to see the back of you. Those were her parting words to me. No, I was sure my “family” did not want me back.

I swallowed his harsh truth down like cold tea, pushing it past my throat, into my stomach, where I wouldn’t have to think of it. Squaring my shoulders, I set to fixing the gravity stabilizer with extra verve. “I hope your brother gets back soon,” I said sharply. Jatinder, barely older than I, was only temporarily in charge until Navid returned from a resource mission. I knew comparisons to his older sibling always chafed. “He said he’d try to get me a new tablet while he was away. Mine has been on the fritz.”

“I don’t know why you bother. There’s nothing to paint but gray walls and billions of stars.”

“I use my imagination. You should try it sometime.”

It took a solid forty-five minutes, but I managed to remove the extra bounce from everyone’s steps by returning the ship’s gravity settings to normal.

“See? Just in time to go teach the bright young minds of tomorrow,” Jatinder said, tossing me a soiled rag. I found a relatively clean corner and wiped my greasy hands off as best I could.

“I’ll see you next shift, Jatinder.” I rushed to get up to the school deck in less than fifteen minutes. Considering the Stalwart was several miles long and eight levels deep, that was no easy feat.

Having fixed the gravity problem at least, I moved up the decks more efficiently than I had on my way down, zipping through narrow corridors I’d practically memorized during my six years on board. Past residency wards U through Y, where officials long ago stopped caring about the colorful graffiti adorning the walls—?some of which was my own. The warm orange and purples

“One of the most anticipated YA debuts of 2018, Brightly Burning is a gothic, romantic mystery with hints of Jane Eyre, Marissa Meyer, and Kiera Cass.” --Entertainment Weekly

“Brightly Burning delivers a brooding gothic mystery and a swoony romance, all set in space. Donne’s atmospheric, twisty update of a cherished classic will keep you up late into the night!” —Elly Blake, NYT bestselling author of the Frostblood Saga

"A gripping examination of class, romance, and survival set in a dystopian future that feels chillingly relevant to our present times."--Kirkus

gets a futuristic reimagining in this appealing YA drama."--Publishers Weekly

This ought to hook readers across genres."--Booklist
We’re sorry 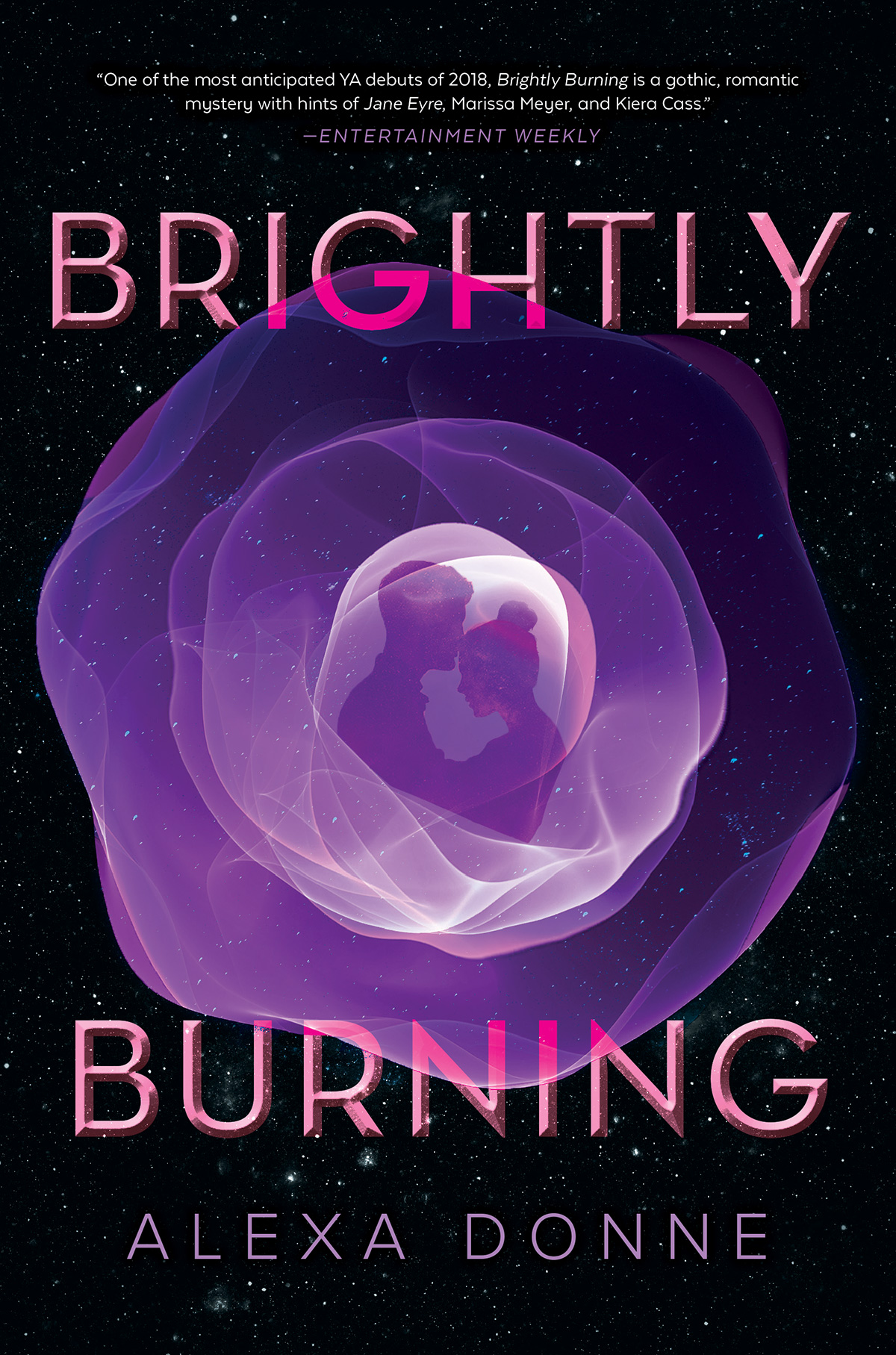