A legendary trailblazer, Arlene Blum defied the climbing establishment of the 1970s by leading the first all-female teams on successful ascents of Mount McKinley and Annapurna and by being the first American woman to attempt Mount Everest. At the same time, her groundbreaking scientific work challenged gender stereotypes in the academic community and led to important legislation banning carcinogens in children’s sleepwear. With candor and humor, Breaking Trail recounts Blum’s journey from an overprotected childhood in Chicago to the tops of some of the highest peaks on earth, and to a life lived on her own terms. Now with an index, additional photos, and a new afterword, this book is a moving testament to the power of taking risks and pursuing dreams.

About the author
Arlene Blum

ARLENE BLUM has a doctorate in biophysical chemistry and has taught at Stanford, Wellesley College, and the University of California, Berkeley. Her bestselling book Annapurna: A Woman’s Place was named one of the one hundred best adventure books of all time by National Geographic. She lives in Berkeley, California.

The sun blazes relentlessly on me, so I grab my doll and climb into a cool, dark space under the back porch. I prop my doll up for a tea party. Between us I spread a lace handkerchief and lay out the blue glass doll dishes Mommy gave me for my fourth birthday. My aunts Ruth and Shirley are sitting on the porch above and their muffled words drift down. Lulled by the warm day, the drone of my aunts’ voices, and the sweet smell of the rosebushes that surround our house, I begin to doze.

I hear my name, startle awake, and listen.

I strain to hear their words. There’s something about my father, Germany . . . And then:

A Slide down Mt. Adams

“CAN YOU KEEP GOING?” John handed me his water bottle.

“I’ll try,” I gasped, taking a sip. We continued upward in the dark, my loud breathing synchronized with the rhythmic tap of our ice axes on the rocky ground, the snow, the ice.

It was September 1964 and we were climbing Mt. Adams, a stately 12,276-foot volcano in southern Washington near Portland, Oregon, where I was a junior at Reed College. After class the previous day, my handsome chemistry lab partner, John Hall, had asked if I would like to join him and four other guys in an attempt on Adams. The previous spring, John had taken me on my first backpack trip. Ever since I had been eager to climb a mountain and spend more time with charismatic John, so I happily accepted his invitation.

We had begun our ascent at one in the morning so we could climb the hard snow slopes above timberline before the sun softened their surface. When I first put on my daypack and headed up, I began panting so loudly that John later confessed he had wondered if I would make it out of the parking lot. And now here I was, an out-of-shape nineteen-year-old girl from the flatlands wearing borrowed boots and pack, trudging up a mountain in the middle of the night.

At dawn, we stopped to get ready to go up the glacier. John helped me strap a pair of crampons—the metal spikes that keep a climber from slipping on ice—onto my boots. He showed me how to tie myself into the braided nylon climbing rope, explaining that it would catch me if I fell into a crevasse. I didn’t know what a crevasse was, but John was so confident I didn’t worry. John tied himself to the front of our rope, I attached myself to the center, and Mike took the end. Fred, Ron, and George tied themselves to the other rope. I liked the secure feeling of this umbilical cord connecting me to these strong, attractive guys.

We began moving up again as the first shafts of light hit the glacier and the hard white snow glittered as though sprinkled with tiny mirrors. Ahead of us was an icefield sliced by long, narrow chasms with walls of blue and green ice—crevasses! Veils of cloud hung suspended above green valleys far below. Carefully placing my boots in John’s footprints, I practiced what he called the rest step: Step, breathe, relax. Step, breathe, relax. Slowly and steadily, my body adapted to the unaccustomed exertion and I began to feel peaceful and strong.

Then I felt a tug at my waist, heard the sound of vomiting, and looked behind me to see Mike doubled up over his ice axe.

“Mike usually starts throwing up when he gets this high,” John said, walking over to me. “He needs to go down—want to go with him?”

John told me about altitude sickness, explaining that some people like Mike have an elevation ceiling above which their bodies don’t adapt.

“Well, you don’t want to push it,” said John, beginning to look uncomfortable himself. “Your breathing didn’t sound so good in the beginning.”

“But now I feel great,” I said. “This is the most beautiful place I’ve ever been.”

“Well, actually, when I asked you to come with us, I thought that by ten thousand feet you’d have had enough and be ready to go down, too,” said John. “That way, Mike would have company.”

“You invited me to come thinking I couldn’t make it to the top?” I tried to stamp my foot in outrage, but the crampon points stuck in the ice.

“Ten thousand feet’s good for a first climb,” John said. “I’m willing to go down, but the others haven’t been here before. Do you want to keep going with three guys who don’t know the route?”

“If it’s that or turn back, I’ll go with them,” I said. I couldn’t bear the thought of leaving this gorgeous place I’d just discovered.

“Okay, okay, I’ll go down with Mike. I’ve climbed Adams lots of times,” said John. “I hate to leave all of you up here, but I guess the route’s easy enough.”

I untied from John and Mike and attached myself to the other rope.

John gave us the chocolate bar he’d brought for the summit. Then he led Mike slowly back down the glacier. As he turned and waved, I felt a pang of regret to be going on without him.

While John had traversed the steep slopes slowly and rhythmically, my less experienced ropemates headed straight up. Before long I was desperate for air, but I forced myself to keep going. Several hours later we reached a rocky point that looked like the top, and I flopped down to rest.

“This is a false summit. The real one’s just ahead,” said Ron, who had become our de facto leader. “Let’s keep moving.” I looked in the direction he was pointing and saw a higher peak far—very far—in the distance. “This is it for me,” I said. “I’ll wait here.” With shaking hands, I untied myself from the rope and the others continued up. As soon as they were out of sight I unzipped my wool dress slacks—the only pants I owned, since, like most women in the 1960s, I usually wore skirts or dresses. I squatted and relieved myself with great satisfaction. I had been holding it for hours, too embarrassed to tell the guys I needed to stop. Then I sank onto a comfortable rock and looked around. The other Cascade volcanoes rose above the valleys like towers above a medieval city. Turning on my side, I watched, fascinated, as an intrepid ladybug crawled toward me, its red and black wings dazzling against the dark basalt rock. It seemed extraordinary to find a small insect high on thisicy ridge, and I realized it was equally astonishing that I was up here. Dozing in the sun, I was content, and not the least sorry that I’d stopped short of the top. Right here were the space and peace I’d craved since my claustrophobic childhood.

An hour later, Ron, Fred, and George returned, jubilant, from the summit. Standing up stiffly to congratulate them, I noticed the long shadows.

“If we’re going to get down before dark,” Ron said, “we’ve got to glissade.”

“Just take off your crampons, sit on the snow, and slide,” Ron said matter-of-factly. “Use your ice axe to steer, and if you start going too fast, roll over and push the pick of your axe into the snow.” Ron sat down and gave a quick demonstration. Then he, Fred, and George slid out of sight.

I had no choice but to follow, my heart pounding. I stuffed my crampons into my daypack, sat down with my legs pointing down the slope, and jammed my ice axe into the snow next to me. As I eased it out, I began to slide. Within moments, I was careening downhill, out of control. Terrified, I rolled over on my stomach and thrust the pick of my axe into the slope. I slowed, but continued sliding. I heaved my whole body up ...

"Personal and disarmingly honest . . . [Blum] simply tells her nourishing and deserving story, quietly reminding us that a woman’s place is indeed on top." — THE NEW YORK TIMES BOOK REVIEW

"A book too engrossing to put down." — THE SEATTLE POST-INTELLIGENCER 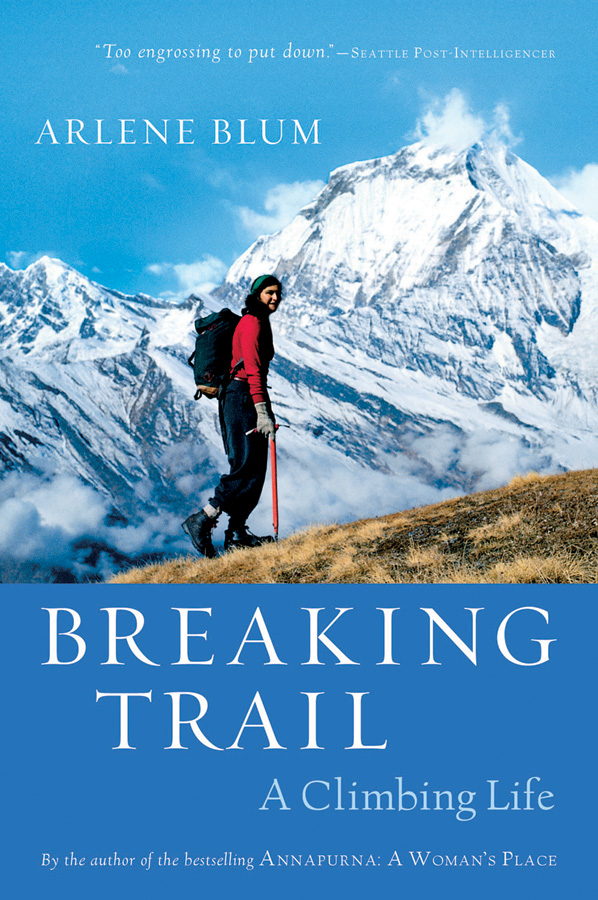