by Francisco Jiménez
$7.99
In this Pura Belpré Honor-winning memoir, sequel to bestselling The Circuit, Francisco Jimenez tells his timely story about immigrant prejudice, keeping hope alive when there is none and his family’s journey to achieving their American dream.

In this Pura Belpré Honor-winning memoir, sequel to bestsellingThe Circuit, Francisco Jimenez tells histimely story about immigrant prejudice, keeping hope alive when there is none and his family’s journey to achieving their American dream.

At the age of fourteen, Francisco Jiménez, together with his older brother Roberto and his mother, are caught by la migra. Forced to leave their home in California, the entire family travels all night for twenty hours by bus, arriving at the U.S. and Mexican border in Nogales, Arizona.

In the months and years that follow during the late 1950s-early 1960s, Francisco, his mother and father, and his seven brothers and sister not only struggle to keep their family together, but also face crushing poverty, long hours of labor, and blatant prejudice. How they sustain their hope, their good-heartedness, and tenacity is revealed in this moving, Pura Belpré Honor-winning sequel to The Circuit. Without bitterness or sentimentality, Francisco Jiménez finishes telling the story of his youth.

About the author
Francisco Jim&eacute;nez

Francisco Jiménez emigrated from Tlaquepaque, Mexico, to California, where he worked for many years in the fields with his family. He received both his master's degree and his Ph.D. from Columbia University and is now the chairman of the Modern Languages and Literature Department at Santa Clara University, the setting of much of his newest novel, Reaching Out. He is the award-winning author of The Circuit, Breaking Through, and La Mariposa. He is also the recipient of the John Steinbeck Award. He lives with his family in Santa Clara, California.

Jiménez' autobiographical story The Circuit (1997) broke new ground with its drama of a Mexican American migrant child in southern California. It won many prizes and was a Booklist Editors' Choice. This moving sequel is a fictionalized memoir of Jimenez's teenage years in the late 1950s, when the family finally stayed in one place and Francisco and his brothers worked long hours before and after school to put food on the table. First they picked strawberries in the fields. Later the jobs got better: cleaning offices, washing windows and walls, waxing floors. The prose here is not as taut as in the first book, but Jimenez writes with simplicity about a harsh world seldom seen in children's books. He also writes about a scary, sad, furious, and broken father--like the father in Na's A Step from Heaven [BKL Je 1 & 15 01]. He stays true to the viewpoint of a teenager growing up poor: the yearning (What would it be like to live in a house, rather than the crowded barracks?); the ignorance (College?); the hurt of prejudice. Yet he celebrates his Mexican roots even as he learns to be an American. The images are powerful, especially the one of the boy cleaning offices before dawn, with notes of English words to memorize in his shirt pocket. An excellent choice for ESL classes, this is a book for many readers, who may discover an America they didn't know was here.

"The images are powerful . . . this is a book for many readers, who may discover an America they didn't know was here." Booklist, ALA, Starred Review

null The Bulletin of the Center for Children's Books 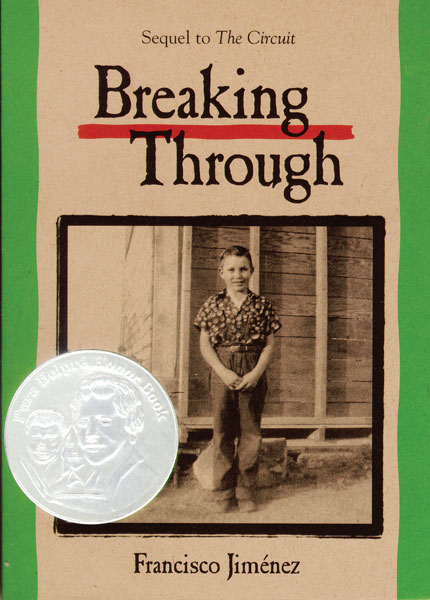