Lucy Bluecrowne wants a life of adventure on the high seas. But when her brother is kidnapped by two time-travelers in search of a magic only he possesses, she gets more adventure than she bargained for in her fight to save him.

Return to the world of the best-selling Greenglass House, where smugglers, magic, and pyrotechnics mix, in a new adventure from a New York Times best-selling, National Book Award–nominated, and Edgar Award–winning author.

Lucy Bluecrowne is beginning a new life ashore with her stepmother and half brother, though she’s certain the only place she’ll ever belong is with her father on a ship of war as part of the crew. She doesn’t care that living in a house is safer and the proper place for a twelve-year-old girl; it’s boring. But then two nefarious strangers identify her little brother as the pyrotechnical prodigy they need to enact an evil plan, and it will take all Lucy’s fighting instincts to keep her family together.

Set in the magical Greenglass House world, this action-packed tale of the house’s first inhabitants reveals the origins of some of its many secrets.

About the author
Kate Milford

Kate Milford is the New York Times bestselling author of the Edgar Award-winning, National Book Award nominee Greenglass House, as well as Ghosts of Greenglass House, Bluecrowne, The Thief Knot, and many more. She lives with her family in Brooklyn, New York. www.greenglasshousebooks.com and www.katemilfordwritesbooks.com, Twitter: @KateMilford

The Peddlers on the Road

Foulk Trigemine hiked into both Nagspeake and the year 1810 at the same time. There were different ways of approaching the shift from where and when Trigemine had last been, but when neither the need for hurry nor the making of some sort of fancy impression was a factor, he liked to do it this way: walking easily and leisurely from then to now just as you’d walk from here to there, so that the passage of time took on the feel of a hike along a gusty road, the years passing on all sides like buffeting leaves in a hard wind. As Trigemine walked, the valleys of Virginia slipped away along with the year 1865 in a rush of blue wool and gray cotton, acrid smoke and swirling fuchsia-colored redbud blossoms. In their place rose this high, dusty road lined by blue-needled pines, silver-white birches wearing the flame colors of autumn, and misshapen iron lampposts that stood at odd angles like trees warped by decades of raw winds. From somewhere below the winding ridge road, the scent of brackish water rose to mingle with the odors of turning leaves and warm metal.

There were different ways of approaching Nagspeake, too, but here, at the northern limits of the city, no one would remark Trigemine’s arrival. He had been told it was a bizarre thing to behold, witnessing a roamer emerging in time in this manner—that it looked a bit like ice blooming, crystalline, across the surface of water, only worlds faster and with a much stranger geometry. The alternative was to simply and inexplicably appear, which could be just as jarring. Up here, on this lonely, forgotten way, no one would see. Except, of course, the man Trigemine was meeting.

The rushing of time subsided and was replaced by applause. “Now that,” said a delighted voice from the other side of the road, “that was something.”

Trigemine turned toward the voice, swept his tall silk hat from his head, and made a bow. “We aim to please at all times.”

The stranger hopped down from the seat of a peddler’s wagon. The eaves of the wagon were hung with elaborately cut decorations that hinted at flowers and flowing plant shoots, but revealed themselves on second glance to be a filigree of rockets and starbursts, falling stars, and other exploding things. From the back of the wagon a stained-glass rendering of a spinning catherine wheel projected, and on the side the gilded letters that spelled I. BLISTER, PROP glittered even in the shadows of the trees. A piebald pony hitched to the front cropped the weeds that grew along the road.

I. Blister, Prop, strode up to Trigemine with one hand outstretched. He was on the smallish, compact side, with close-shorn salt-and-pepper hair and fingers stained with ash. An oversize velvet coat hung from his shoulders, and a pair of silver scissors-glasses dangled from a chain around his neck. “Good to meet you at last, Foulk. I may call you Foulk, mayn’t I? I am Ignis Blister, Founding Member of the Confraternity of Yankee Peddlers and Grandmaster of the Worshipful Company of Firesmiths and Candescents, fourth in precedence among the Chapmen’s Guilds.” His cheerful voice took on just a little hint of smugness as he finished his recitation.

Trigemine waited out the introduction and worked at ignoring the touch of vainglory in Blister’s tone. Ordinarily, if he’d come across a hawker who’d put on such airs while speaking to him, Trigemine would’ve done something about it. But Ignis Blister was hardly a common merchant on a high horse. Trigemine knew enough about Blister to be wary of him, but even if he hadn’t, no mere peddler would’ve been summoned to help with this task. Morvengarde did not deal with mere peddlers.

And Trigemine was no ordinary peddler himself. “Pleasure,” he replied. “Foulk Trigemine, as you know. Victualer and Sutler-at-Large, without precedence or precedent.” The two men sized each other up as they shook hands.

“You’ve come from Morvengarde?” Blister asked. The smugness was gone now, and there was a false note in its place, an oh-so-slightly forced casualness. Talking about the head of the Deacon and Morvengarde Company did that to you, no matter how big a bug you thought you were.

Trigemine found himself liking Blister better. “Sure did.”

“And you are the custodian of the famous kairos mechanism.” Blister eyed him, obviously after a glimpse of the item in question.

Trigemine reached into his vest pocket and took the mechanism out: a round double-sided gadget the size of a pocket watch. He held it up, touched a button on the rim, and saw Blister’s eyes grow fascinated as six concentric circles unfolded, each rotating on a separate delicate arm. “There it is.” Look down your nose at me now, you pompous devil, he added mentally. “Which reminds me.” A little green pincushion hung on the watch fob beside the device. Trigemine plucked an engraved stickpin from it and held it out.

Blister took the pin and eyed it with interest. “Must I wear it somewhere particular?”

“Anyplace is fine so long as you keep it on your person.”

The peddler ran his fingers over the engravings. “It’s lovely.” He threaded it through the fabric of his lapel. “There. How does it work, precisely?”

“Precisely?” Trigemine snorted. “There’s nothing precise about walking through time. Let’s just say, so long as you wear the pin, I can use the mechanism to carry you out of the here-and-now and into the there-and-then.”

“Nothing precise? Really? I gathered it required incredible exactitude. Meticulous computations and so forth.”

“Oh, yes. It requires a world of reckonings, and meticulous barely hints at how painstaking I’ve got to be about them in order to be tolerably accurate in my walking. But it’s all to pin down something that, at its heart, resists precision.” Trigemine folded the concentric rings back up and closed the device. He turned it over and showed Blister the circular slide rule on the back: an ivory spiral engraved with numbers and symbols. A thin bit of golden mica isinglass overlaid one triangular section like a translucent pie slice. He gave the winder pin on the side a twist and the numbers swirled inward.

“In a nutshell, the mechanism calculates the point at which the passage of time—chronos—intersects with kairos, the ideal moment for accomplishing a thing. And, of course, the mechanism manages the walking-through-time-and-space bit, as well.”

Blister lifted his scissors-glasses to his eyes and peered at the slide rule. “That sounds simple enough.”

“Well, it isn’t, for three reasons.” Trigemine held up his index finger. “One: Time is relative. We call its progression chronos, but it isn’t chronologi...

"The engrossing adventure, as well as the thoughtful depiction of a blended, multicultural family, are all draws enough on their own, but the glimpse of Milford’s bewitching world-building will leave readers eager to track down her other novels."--Booklist, STARRED review 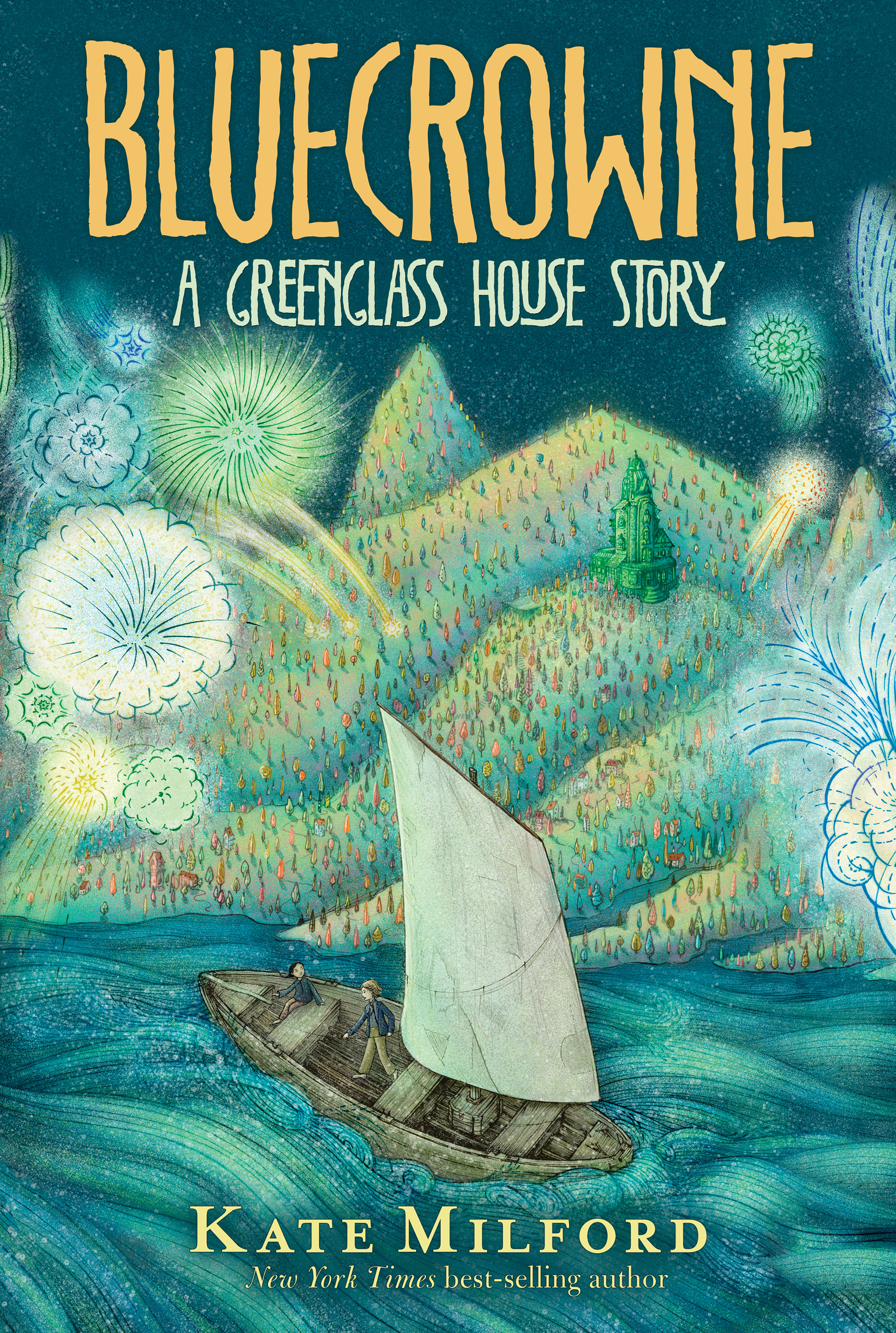