Aurelia is a princess, but they call her a witch.

Surrounded by spirits and burdened with forbidden magic, she lives in constant fear of discovery by the witch-hunting Tribunal and their bloodthirsty mobs. When a devastating assassination attempt reveals her magical abilities, Aurelia is forced to flee her country with nothing but her life.

Alone and adrift in an enemy kingdom, Aurelia plans her revenge against the Tribunal, desperate to bring down the dark organization that has wrought terror upon her people for hundreds of years. But there's something deeply amiss in her new home, too, and soon she finds herself swept into a deadly new mystery with a secretive prince, the ghost of an ancient queen, and a poison vine called Bloodleaf.

Aurelia is entangled in a centuries-long game of love, power, and war, and if she can't break free before the Tribunal makes its last move, she may lose far more than her crown.

About the author
Crystal Smith

Crystal Smith is a writer, photographer, and artist who developed an early love of storytelling in a family of voracious readers. She resides in Utah with her high school sweetheart husband and two lively sons. When she isn't writing or creating, she can be found re-watching Jane Eyre or reading ghost stories with all the lights on. @crysrensmith.

I held my cloak tight around my chin, keeping my head down as the crowd converged in the square beneath the clock tower. It was a chilly morning; breath was billowing from my mouth in wispy clouds that rose and disappeared into the fog. I scanned right and left from under my hood, wary.

“Good day for a hanging,” a man next to me drawled in a conversational tone.

I glanced quickly away, unable to meet his eyes for fear he might notice mine. It wasn’t often that a person was determined to be a witch by such a trivial trait as the color of her eyes, but it wasn’t unprecedented.

A murmur rippled across the crowd as two women were prodded up the stairs onto the platform. Accused witches, both of them. The first woman’s shackled hands shook so hard, I could hear the clink of her chains from my distant spot in the throng. The second, a younger woman with a sad face and stooped shoulders, was perfectly still. They were both dressed in rags, dirt caking their sallow cheeks and clinging to their matted hair. They’d probably been isolated and starved for days, long enough to turn them desperate and feral. It was a calculated tactic; if the accused witches seemed subhuman and unhinged onstage, it not only quelled the reservations of the scrupulous few who might doubt the Tribunal’s practices, but it also made for a more entertaining show.

The man who’d spoken to me sidled in closer. “Fantastic fun, these hangings. Wouldn’t you agree?”

I tried to ignore him, but he leaned in, repeating quietly, “Wouldn’t you agree, Princess?”

Startled, I found myself staring into a pair of purposeful, umber-colored eyes flanked by an unsmiling mouth and a cocked eyebrow.

“Kellan,” I said in a heated whisper. “What are you doing here?”

He set his jaw, shadows collecting in the hollows beneath his copper-brown cheekbones. “As I am supposed to be guarding you, perhaps you can tell me what you are doing here and answer my question and yours at the same time.”

“If you drag me away now, it will cause a scene. Is that what you want? To draw attention to me?”

Kellan’s mouth twisted. He had been appointed as a lieutenant to the royal family’s regiment at fifteen and assigned as my personal guard at seventeen. Now twenty, he was long since oath-bound to protect me. And he knew the only thing more hazardous to my health than standing in the middle of a crowd of agitated witch haters would be alerting them to my presence. Though it pained him to have to do so, he relented. “Why do you even want to be here, Aurelia? How can this possibly be good for you?”

I didn’t have a reasonable answer for him, so I didn’t reply. Instead, I nervously fiddled with the charm bracelet at my gloved wrist; it was the last gift I’d ever received from my late father, and wearing it always had a soothing effect on me. And I needed serenity as the black-clad executioner arrived, followed by a Tribunal cleric who announced that the great Magistrate Toris de Lena was taking the stage to officiate.

Toris was a commanding presence in his starched collar and stiff black Tribunal coat. He paced in front of us, holding a copy of the Founder’s Book of Commands to his chest, the very picture of somber regret.

“Brothers and sisters,” he began. “It is with great sadness we gather today. We have before us Madams Mabel Lawrence Doyle and Hilda Everett Gable. Both have been accused of practicing arcane arts, and both have been tried and found guilty by fair tribunal.” Around his neck hung a vial of red liquid. He raised it so all could see. “I am Magistrate Toris de Lena, bearer of the blood of the Founder, and I have been selected to preside over these proceedings.”

“I don’t understand,” Kellan was saying quietly by my ear. “Is this some challenge you’ve put to yourself? Come stand in the midst of your enemies? Face your fears?”

My eyebrows knitted together. Being arrested and tried and publicly executed was a very acute fear of mine, but it was only one black horse in my vast stable of nightmares.

Right then I saw a dim shadow pass in front of the younger lady—?Mabel—?and pause next to her. The shadow flickered at her feet, gathering form from the morning mist until it became starkly clear. The air grew even colder in the square as the spirit pulled heat and energy into his cloudy form. It was a young boy, no more than seven. He clung to the skirt of the shackled woman.

No one touched him. No one even looked his way. I was likely the only one who could see him. But Mabel knew he was there, and her face shone with something I could not name: perhaps pain, perhaps joy, perhaps relief.

“I know that woman,” Kellan whispered. “Her husband used to come through Greythorne, selling books, at least two or three times a season. He died last year, one of those who caught that awful fever that went around the first part of winter. Him and a son, too, I think.”

I knew Mabel too, but I couldn’t risk telling Kellan that.

The tower clock showed it only a minute away from the hour, and Toris’s florid speech was winding down. “It is your time to speak,” he said to the women as the executioner situated a rope over their heads and around their throats. “Madam Mabel Lawrence Doyle, you have been tried and found guilty by fair Tribunal for the distribution of illicit texts and for attempting to raise the dead through use of magic and witchcraft, in defiance of our Book of Commands. By the blood of the Founder, you have been condemned to die. Say your last words.”

I stiffened, waiting for her to point a finger at me, to call me by name. To bargain for her life with mine.

Instead she said, “I am at peace; I have no regret.” And she lifted her face to the sky.

A familiar scent drifted around me: roses, though it was too early in the season for them. I knew what it meant, but when I looked right and left, I saw no sign of her. The Harbinger.

Toris turned to the se...

“[R]omance, danger, and magic make for a winning combination that will keep readers glued to the pages long after bedtime.” –School Library Journal

"A multifaceted scheme, mistaken identity, and a simmering romance will keep readers riveted and dying to know how it all unfolds. The exploration of the land’s religion and people’s conflicting understandings of it seems to be a reflection of the real world, lending the story a deeper commentary without sidelining the main plot. An excellent choice for fans of smart, independent female leads, intriguing fantasy worlds, and a race against the clock to defeat evil." –Booklist

"[A] riveting read....rife with surprising twists....This novel is a well-developed page-turner that will have fans of both the fantasy and mystery genres rushing to finish." –Bulletin of the Center for Children's Books

"Debut author Smith explores the power of sacrifice in this darkly romantic reimagining of the Brothers Grimm’s 'The Goose Girl.'" –Publishers Weekly

“Enchanting, visceral, and twisty, Bloodleaf  is a phantasmagorical wonder that will keep you guessing until the very last page.”–NYT bestselling author of Ash Princess, Laura Sebastian

“Eerie, immersive, and fascinating, Bloodleaf  feels like a classic in the making. Readers will be pulled deep into Aurelia's world, and lose sleep alongside her as the deadly mysteries close in.”–Sarah Holland, NYT  bestselling author of Everless

“Smith weaves together mystery, adventure and a reimagined fairy tale in this bewitching debut. An irresistible, spellbinding story.”–Rebecca Ross, author of The Queen’s Rising

“I am all in my feelings about this book.  This book got under my skin and poked at my soul. Bloodleaf is gritty, raw, and dark but it is also beautiful and powerful.  Crystal Smith is like the George R.R. Martin of YA. A roundhouse kick to the heart and readers will ask for more—Crystal has a new fan!”–Kim Brock, Joseph Beth Booksellers, Cincinnati, OH

“Bloodleaf provides food for thought on our world even while immersing readers in a fully imagined world of its own. The combination of magic and political intrigue make it a great choice for fans of Victoria Aveyard or Susan Dennard.”–Leslie Hawkins, Spellbound Children’s Bookshop, Asheville, NC

“I was so absolutely enthralled with what was going on that I wasn't even thinking more than a sentence ahead. Highly Highly recommend!!”–Nichole Cousins, White Birch Books, North Conway, NH

“Bloodleaf is one of those rare stories that truly grabbed me from the very first paragraph and never let me go. So much more than a retelling of the Grimm fairy tale the Goose Girl, Crystal Smith has woven a tale of identity, secrets, adventure, magic, and love that I just adored.  I cannot wait for what comes next!”–Lauren D’Alessio, Wellesley Books, Wellesley, MA

“Bloodleaf is an intriguing and suspenseful fantasy, sure to be popular with teen and adult readers. I loved it and am already looking forward to book 2!”–Holly Frakes, Schuler Books and Music, Okemos, MI

“Being strong means making important choices in a moment— Aurelia has to abandon her emotional and physical comforts, and her family to save her kingdom.  Through complicated magic and courage, Aurelia shows us how believing in yourself, while not being selfish, conjures up a power that brings justice to her world.”–Kira Wizner, Merritt Bookstore, Millbrook, NY

“A YA fantasy page turner, Bloodleaf captures all the excitement of a strong princess fighting for her country and her life while exploring her identity.”–Jen Kraar, City of Asylum Books, Pittsburgh, PA 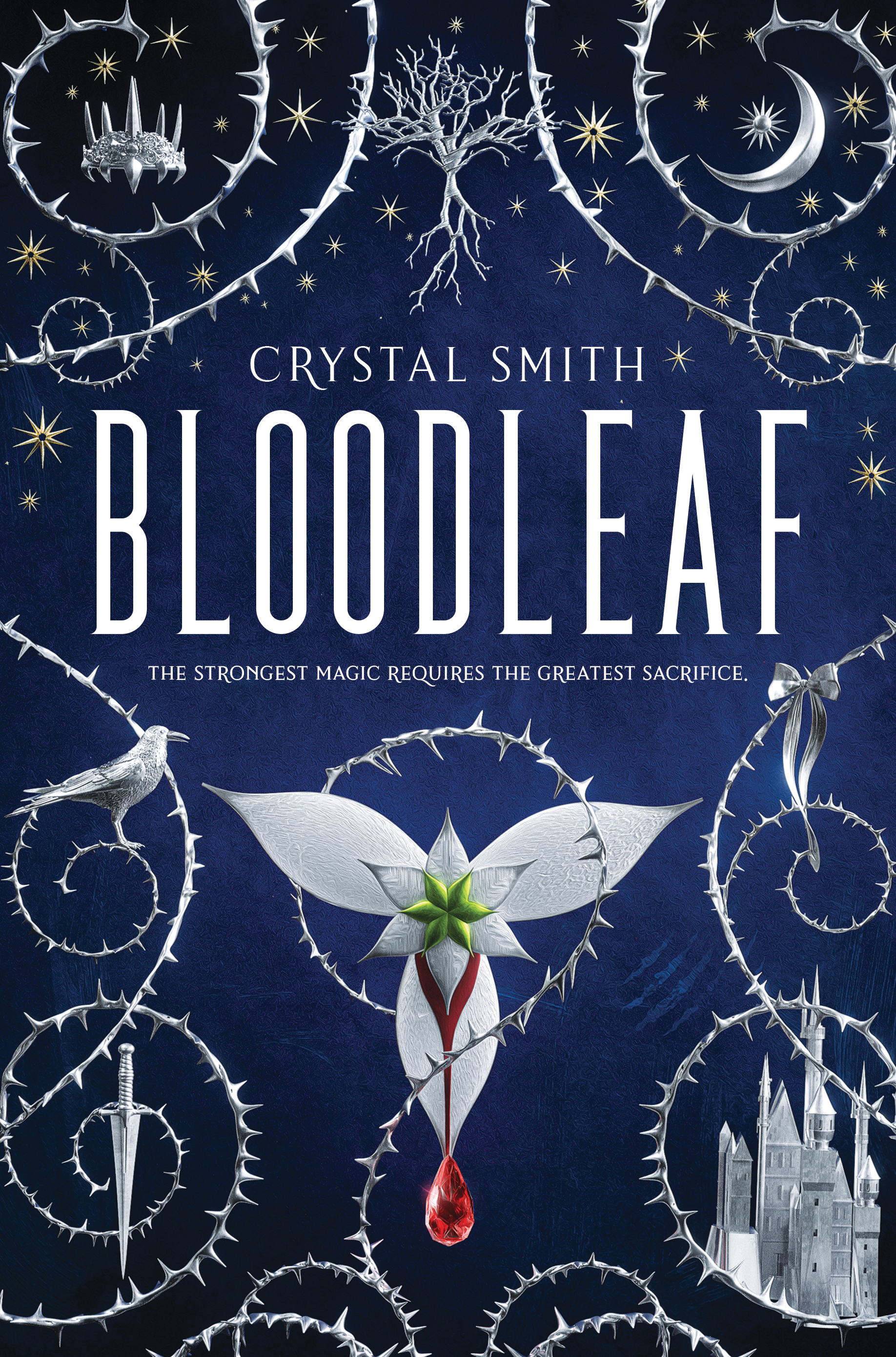