by Loree Griffin Burns and Ellen Harasimowicz
$9.99
A fascinating nonfiction photo essay about the tree-killing Asian long-horned beetle in our very own backyards. Read about how the help of everyday people, their neighborhoods, teams of beetle-sniffing dogs, and a nationwide effort from bug scientists to tree doctors are working to eradicate this incredibly invasive pest.

The Asian longhorned beetle (ALB) has made news across the United States. These beetles came to America from China, living in wood turned into shipping material. At first the beetles invaded urban areas, where hardwood trees were in limited supply—Chicago was able to declare itself ALB-free in 2006. But right now there is bad news in Massachusetts, New York, New Jersey, and Toronto—infestations have erupted in the area’s hardwood forests, and these beetles, while bad at flying, are very good at killing trees.

Clint McFarland’s job? Stop the ALB at any cost. How do you balance the needs of residents, the impact to the environment, and an invasive species primed to wipe out entire forests? It takes the help of everyday people, such as children playing baseball at a playground, teams of beetle-sniffing dogs, and science-minded people (bug scientists and tree doctors) to eradicate this invasive pest.

About the author
Loree Griffin Burns

LOREE GRIFFIN BURNS, Ph.D., did her doctoral at the University of Massachusetts Medical School. The author of Beetle Busters, Tracking Trash, and The Hive Detectives, she is an award-winning writer whose books for young people have won many accolades, including ALA Notable designations, a Boston Globe-Horn Book Honor Book Award, an IRA Children's Book Award, a Green Earth Book Award and two Science Books & Films (SB&F) Prizes.Loree holds a Ph.D. in biochemistry and her books draw heavily on both her passion for science and nature and her experiences as a working scientist. She lives with her husband and their three kids in a farmhouse in central New England, where she gardens, keeps chickens, and writes about science and scientists. She likes to think that one day she'll fill the big old barn on their property with horses.Learn more about Loree at loreegriffinburns.com and follow her on Twitter @loreegburns.

ELLEN HARASIMOWICZ is a freelance photojournalist who has photographed professionally since 2003. Her work has appeared in the Boston Globe, the Washington Post, and Scientific American.She photographs primarily for independent schools in Massachusetts, but her real love is travel. Her travels, on assignment and for personal projects, have taken her to more than 30 countries in Europe, Africa, Asia, North America, the Caribbean and Central America. Her love for travel stems from her curiosity, which led her to the world of children's literature.Since 2006, Ellen has illustrated four children's books with her photographs, including three middle-grade books with Loree Burns: The Hive Detectives, Citizen Scientist, and Beetle Buster.Ellen lives in Massachusetts with her husband, Paul; her work can be seen at ellenharasimowicz.com. Follow Ellen on Twitter @ellharas.

* "A splendid example of science controversy in everyday life."

"Burns delivers a fascinating look at the origins of an invasive species and efforts to combat the damage it causes."

* "This fascinating, timely book might just change the way readers look at insects and trees for good."

"The subject and the youth of many of the participants give this title an immediacy unusual even in this excellent series, bridging the gap between scientist and reader in a way that invites kids into the process."

"Clear photographs, charts, diagrams, and a straightforward text with appropriate scientific vocabulary outline the problem, from the beetle’s invasion and difficult discovery to the trees’ destruction and replanting." 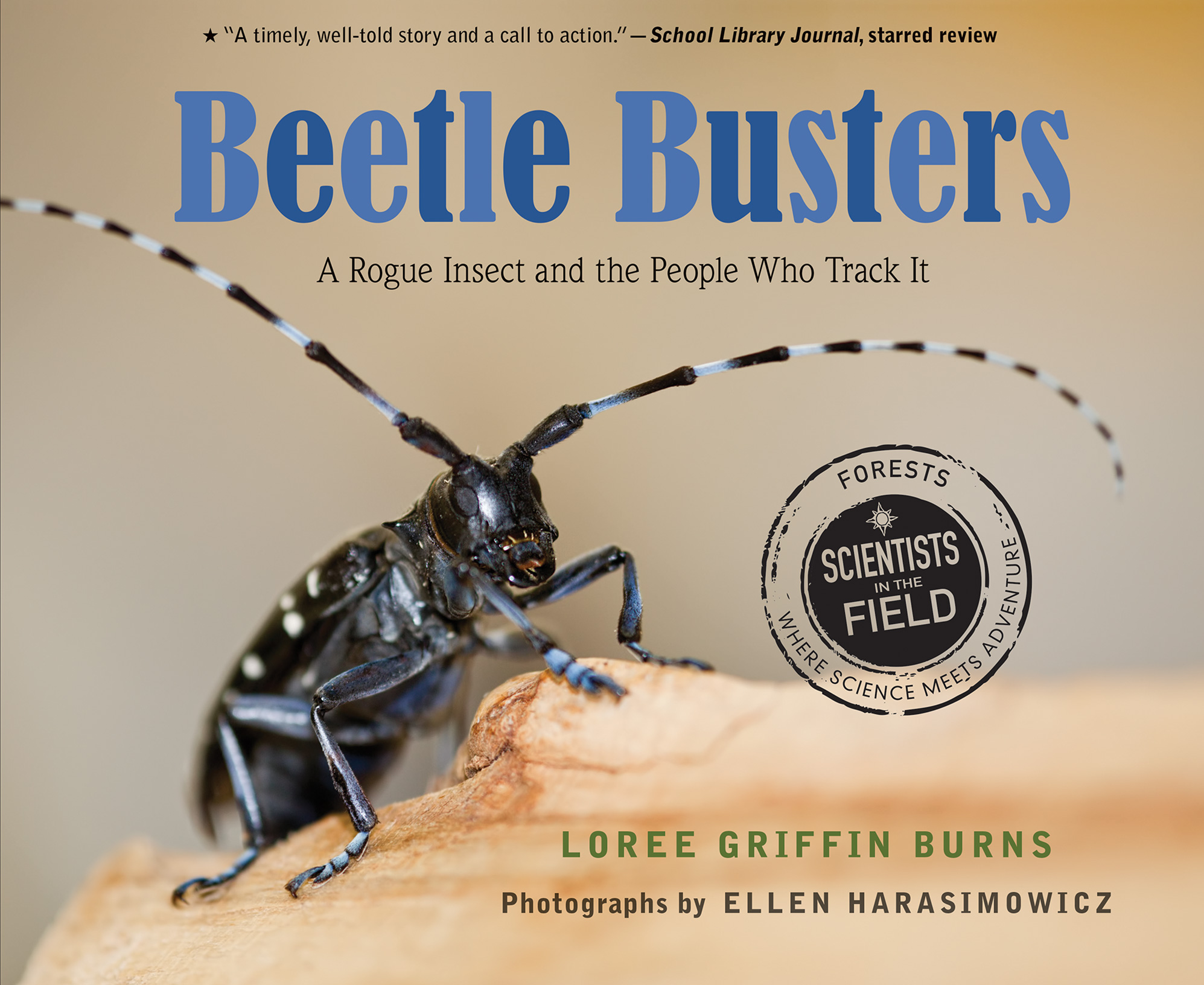