Part memoir and part joyful romp through the fields of imagination, the story behind a beloved pseudonymous Twitter personality reveals how a writer deep in grief rebuilt a life worth living.

“Unforgettable . . . Behind her brilliantly witty and uplifting message is a remarkable vulnerability and candor that reminds us that we are not alone in our struggles—and that we can, against all odds, get through them.”—Lori Gottlieb, New York Times best-selling author of Maybe You Should Talk to Someone

Becoming Duchess Goldblatt is two stories: that of the reclusive real-life writer who created a fictional character out of loneliness and thin air, and that of the magical Duchess Goldblatt herself, a bright light in the darkness of social media. Fans around the world are drawn to Her Grace’s voice, her wit, her life-affirming love for all humanity, and the fun and friendship of the community that’s sprung up around her.

@DuchessGoldblat (81 year-old literary icon, author of An Axe to Grind) brought people together in her name: in bookstores, museums, concerts, and coffee shops, and along the way, brought real friends home—foremost among them, Lyle Lovett.

“The only way to be reliably sure that the hero gets the girl at the end of the story is to be both the hero and the girl yourself.” — Duchess Goldblatt

About the author
Anonymous

DUCHESS GOLDBLATT, 81, is the inspirational author of An Axe to Grind; Feasting on the Carcasses of My Enemies: A Love Story; and the heartwarming meditation on mothers and daughters Not If I Kill You First. A cultural icon, trophy ex-wife, friend to all humanity, and sponsor of the prestigious Goldblatt Prize in Fiction, she lives in Crooked Path, NY. She's fictional but her love is real. ANONYMOUS, the real-life person in whose mind Duchess Goldblatt lives and flourishes, has gathered all available truth and beauty for these pages. There's nothing else to give.

Named a Most Anticipated Book of 2020by Real Simpleand The Millions

A Best Book of July in the New York Times, Amazon, the Christian Science Monitor, and Apple

An Indie Next Pick

A Best Book of the Summer from Marie Claire, Iowa Public Radio and Boston

"Deeply satisfying, unexpectedly moving...As lovable as the duchess herself...In Duchess Goldblatt's digital neighborhood, people are not just welcome but completely adored...Duchess and Anonymous subtly, slowly become one person. She no longer feels alone; neither do her subjects. People find solace in this fictional character—and Anonymous does, too."

"There's no recipe for Duchess Goldblatt tweets, but they often amount to one part conventional wisdom and two parts surrealism, with some grandmotherly tenderness or saltiness sprinkled in for good measure...Her feed is one of the few places on the internet devoted to spreading unadulterated joy. It's also a successful example of social media literature, due in part to Duchess's voice, which requires readers to confront the ridiculousness of the entire premise alongside the sincerity of her musings...Becoming Duchess Goldblatt recontextualizes the Twitter account as a therapeutic exercise."

"A tonic, a gift for our anxious summer...Becoming Duchess Goldblatt is many things, all of them splendid...The best sort of self-help, demonstrating that creativity, generosity and even Twitter...can offer salvation and lift all boats...Anonymity liberates the author to share her story without restraint. The book is enriched by two distinct voices: one frank and vulnerable, the other all-knowing. You believe the details of the author's life because, though Duchess, she's committed to staying generous and true...This sort of anonymity, in a time of too much oversharing on too many platforms, is a respite. We need magic. The book's timing is inspired. It's a summer cocktail of a book. Of Duchess Goldblatt, we would expect nothing less."

"The writer goes to great lengths in the book to demarcate herself from the Duchess. Goldblatt is an alter ego, someone onto whom she can project her pain and have it come back in the form of jokes. An obvious model is Dorothy Parker, but in a way the writer's creative nimbleness and insistence on anonymity brings to mind someone more like Lee Israel...Her proclamations sound like pithy lines from a standup special—that is, if the comedian was God and if God was an 81-year-old woman from the 17th century...What's most astonishing is the relationship Duchess has with her community...They find her amusing, comforting, assuring...Originally used as a tool to deal with her own trauma, over time the Duchess has mutated into something more like a movement. Duchess Goldblatt is a kid of way to rewrite the ways we treat ourselves and the people around us. The writer admits to a very famous friend she meets at one point in the book that the Duchess 'whispers' little prayers to each of her followers...It's loving the bizarre and cherishing the weird that Goldblatt does best. And it's why so many people trust her to tell them how to live, how to treat themselves with more compassion, how to treat each other better, too."

"The Duchess is a light shining in the darkness, a beacon for troubled souls scrolling through their phones in the wee hours of the morning. Her presence has uplifted her human avatar, even as it heartens Her Grace's ever-growing audience of 'loons' and 'rascals.' She might be an invention of social media, but—as the Duchess would say—her love is real."

"A life-affirming memoir packed with hilarity and candid observations about life and love."

"A source of wry wisdom and off-kilter commentary...A testament to the powers of redemption, reinvention, and yes, country singer Lyle Lovett."

"The fragmented nature of the internet lends itself to an aphoristic quality, and its anonymity has resurrected a certain Respublica literaria that can, for all of the web's reputation, feel downright Enlightenment. The anonymous woman behind the popular Duchess Goldblatt account on Twitter, with her avatar drawn from a Netherlands Renaissance portrait, is a case in point...Duchess Goldblatt has self-fashioned a persona delivering bon mots both witty and gnomic, all while using the internet itself as an aesthetic medium where the product is constructed identity...This anonymous memoir delivers."

"A fascinating memoir by a 21st-century original."—Kirkus, STARRED review

"A surprising, joyful story of social media at its best."—Booklist

"After reading this unforgettable memoir, I figured out who Duchess Goldblatt is: all of us. Behind her brilliantly witty and uplifting message is a remarkable vulnerability and candor that reminds us that we are not alone in our struggles—and that we can, against all odds, get through them. As though casting a magic spell on her readers, she moves, inspires, and connects us through her unvarnished humanity. It was, for this therapist, a form of therapy I didn't know I needed."

—Lori Gottlieb, New York Times-bestselling author of Maybe You Should Talk to Someone

"This book is, like Duchess Goldblatt herself, nothing you expect and everything you need. It's a memoir not just of one life (failures and triumphs laid bare) but also of a second self—its creation, its evolution, its improbable splendor. We may never deserve Duchess Goldblatt and her magnanimity, but her inventor most certainly does."

“What an unexpected marvel of a book, funny and poignant and—dare I say—sweet. It’s fashionable to bash social media, but without it, we wouldn’t have Duchess and that would be a damn shame.”—Laura Lippman, New York Times-bestselling author of Lady in the Lake and Sunburn

“The question I am most often asked by readers out in the world, is, ‘Who is Duchess Goldblatt?’ The correct answer is, ‘She is the Universe’s secret admirer, a made-up & hilarious octogenarian who lives on Twitter, who delivers love and demands it in equal, astonishing measure.’ What they mean is: what’s her real identity? This book does not precisely reveal that. Instead it’s the actual memoir of a fictional person, a meditation on what it means to start again in the oddest way possible. It is also heartbreaking, funny, gorgeously written, surprising, brilliant, p... 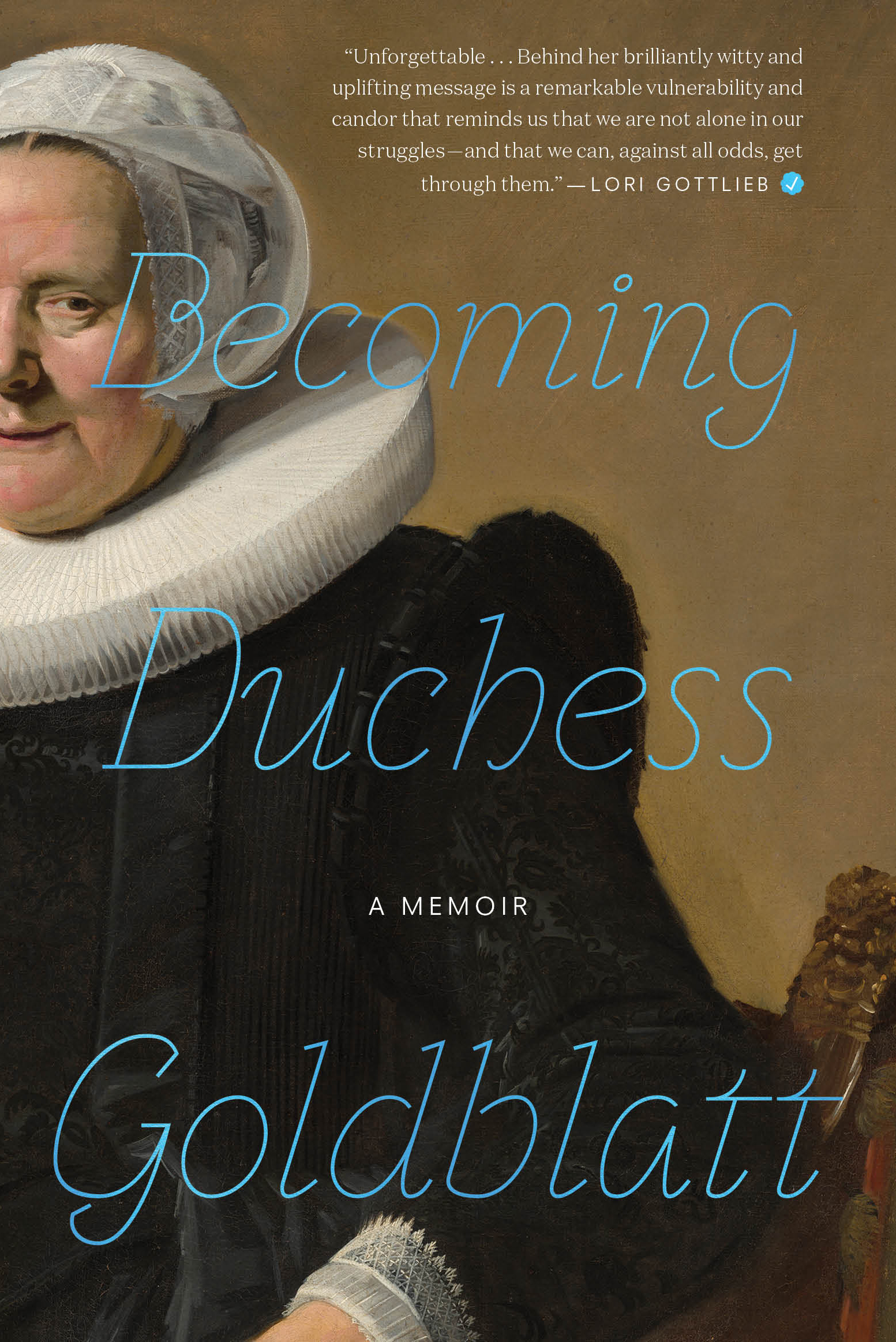