Beautiful Boy: A Father's Journey Through His Son's Addiction

What had happened to my beautiful boy? To our family?What did I do wrong? Those are the wrenching questions that haunted every moment of David Sheff ’s journey through his son Nic’s addiction to drugs and tentative steps toward recovery. Before Nic Sheff became addicted to crystal meth, he was a charming boy, joyous and funny, a varsity athlete and honor student adored by his two younger siblings. After meth, he was a trembling wraith who lied, stole, and lived on the streets.David Sheff traces the first subtle warning signs: the denial, the 3 A.M. phone calls (is it Nic? the police? the hospital?), the rehabs.His preoccupation with Nic became an addiction in itself, and the obsessive worry and stress took a tremendous toll. But as a journalist, he instinctively researched every avenue of treatment that might save his son and refused to give up on Nic.
Beautiful Boy is a fiercely candid memoir that brings immediacy to the emotional rollercoaster of loving a child who seems beyond help.

“A brilliant, harrowing, heartbreaking, fascinating story, full of beautiful moments and hard-won wisdom. This book will save a lot of lives and heal a lot of hearts.” — Anne Lamott

“‘When one of us tells the truth, he makes it easier for all of us to open our hearts to our own pain and that of others.’ That’s ultimately what Beautiful Boy is about: truth and healing.” — Mary Pipher, author of Reviving Ophelia

What had happened to my beautiful boy? To our family? What did I do wrong? Those are the wrenching questions that haunted David Sheff’s journey through his son Nic’s addiction to drugs and tentative steps toward recovery. Before Nic became addicted to crystal meth, he was a charming boy, joyous and funny, a varsity athlete and honor student adored by his two younger siblings. After meth, he was a trembling wraith who lied, stole, and lived on the streets. David Sheff traces the first warning signs: the denial, the three a.m. phone calls—is it Nic? the police? the hospital? His preoccupation with Nic became an addiction in itself. But as a journalist, he instinctively researched every treatment that might save his son. And he refused to give up on Nic.

About the author
David Sheff

DAVID SHEFF is the author of several books, including the #1 New York Times best-selling memoir Beautiful Boy. His writing has appeared in the New York Times, the New York Times Magazine, Rolling Stone, Playboy, Wired, and many other publications. His ongoing research and reporting on the science of addiction earned him a place on Time magazine's list of the World's Most Influential People. Sheff and his family live in the San Francisco Bay Area. Visit David at DavidSheff.com, and on Twitter @david_sheff.

It hurts so bad that I cannot save him, protect him, keep him out of harm's way, shield him from pain. What good are fathers if not for these things?

"Howdy Pop, God, I miss you guys so much. I can't wait to see you all. Only one more day!!! Woo-hoo." Nic is emailing from college on the evening before he arrives home for summer vacation. Jasper and Daisy, our eight- and five-year- olds, are sitting at the kitchen table cutting, pasting, and coloring notes and welcome- home banners for his homecoming. They have not seen their big brother in six months.

In the morning, when it's time to leave for the airport, I go outside to round them up. Daisy, wet and muddy, is perched on a branch high up in a maple tree. Jasper stands below her. "You give me that back or else!" he warns.

"No," she responds. "It's mine." There is bold defiance in her eyes, but then, when he starts to climb up the tree, she throws down the Gandalf doll he's after.

"It's time to go get Nic," I say, and they dash past me into the house, chanting, "Nicky Nicky Nicky." We drive the hour and a half to the airport. When we reach the terminal, Jasper yells, "There's Nic." He points. "There!" Nic, an army green duffel bag slung over his shoulder, leans against a NO PARKING sign on the curb outside United baggage claim. Lanky thin in a faded red T-shirt and his girlfriend's cardigan, sagging jeans that ride below his bony hips, and red Converse All-Stars, when he sees us, his face brightens and he waves.

The kids both want to sit next to him and so, after throwing his bags into the way back, he climbs over Jasper and buckles in between them. In turn he clasps each of their heads between the palms of his hands and kisses their cheeks. "It's so good to see you," he says. "I missed you little boinkers. Like crazy." To us up front, he adds, "You, too, Pops and Mama." As I drive away from the airport, Nic describes his flight. "It was the worst," he says. "I was stuck next to a lady who wouldn't stop talking. She had platinum hair with peaks like on lemon meringue pie. Cruella De Vil horn-rimmed eyeglasses and prune lips and thick pink face powder." "Cruella De Vil?" Jasper asks. He is wide-eyed. Nic nods. "Just like her. Her eyelashes were long and false — purple, and she wore this perfume: Eau de Stinky." He holds his nose. "Yech." The kids are rapt.

We drive across the Golden Gate Bridge. A river of thick fog pours below us and wraps around the Marin Headlands. Jasper asks, "Nic, are you coming to Step-Up?" referring to his and Daisy's upcoming graduation celebration. The kids are stepping up from second grade to third and kindergarten to first grade.

"Wouldn't miss it for all the tea in China," Nic responds. Daisy asks, "Nic, do you remember that girl Daniela? She fell off the climbing structure and broke her toe."

Jasper gravely reports, "They will cut it off with a hacksaw." "Her toe?"

After a while, Nic tells them, "I have something for you kiddos.

In my suitcase." "Presents!" When we get home," he responds.

They beg him to tell them what, but he shakes his head. "No way, José. It's a surprise." I can see the three of them in the rearview mirror. Jasper and Daisy have smooth olive complexions. Nic's was, too, but now it's gaunt and rice-papery. Their eyes are brown and clear, whereas his are dark globes. Their hair is dark brown, but Nic's, long and blond when he was a child, is faded like a field in late summer with smashed-down sienna patches and sticking-up yellowed clumps — a result of his unfortunate attempt to bleach it with Clorox.

"Nic, will you tell us a P. J. story?" Jasper begs. For years Nic has entertained the kids with The Adventures of P. J. Fumblebumble, a British detective of his invention. "Later, mister, I promise."

We head north on the freeway, exiting and turning west, meandering through a series of small towns, a wooded state park, and then hilly pastureland. We stop in Point Reyes Station to retrieve the mail. It's impossible to be in town without running into a dozen friends, all of whom are pleased to see Nic, bombarding him with questions about school and his summer plans. Finally we drive off and follow the road along Papermill Creek to our left turn, where I head up the hill and pull into our driveway.

Lugging his bags, Nic follows the kids into the house. The dogscharge him, barking and howling. At the top of the stairs, Nic is greeted by the kids' banners and drawings, including a hedgehog, captioned, "I miss Nic, boo hoo," drawn by Jasper. Nic praises their artistry and t...

"An honest, hopeful book, coming at a propitious moment in the meth epidemic." Publishers Weekly

"An excellent book that all parents can relate to whatever their children's situation." Library Journal Starred

“Those of us who love an addict — or are addicts ourselves — will find BEAUTIFUL BOY a revelation." — Martin Sheen, actor

"A welcome balm to millions…who thought they were making this journey alone."— Armistead Maupin, author of The Night Listener

"This book is going to save a lot of lives, and help heal…hearts." — Anne Lamott, author of Grace (Eventually)

"For…any one who has ever wrestled with holding on and letting go.” — Thomas Lynch, author of The Undertaking

“A masterpiece of description and feeling…immediate, informative and heartbreaking.” — Susan Cheever, author of Note Found in a Bottle 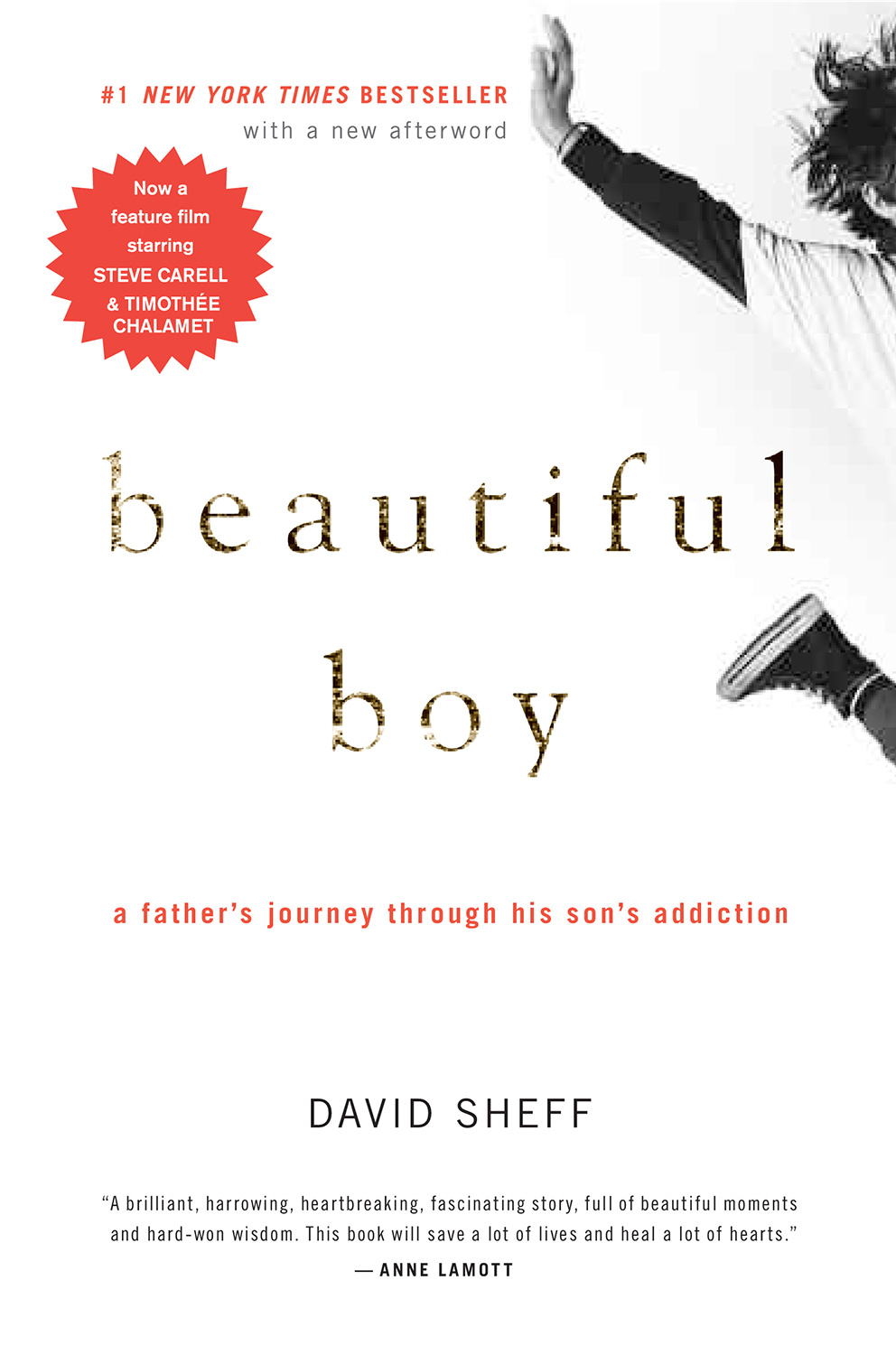