Carrie Vaughn's Bannerless is a novel in which an investigator must discover the truth behind a mysterious death in a world where small communities struggle to maintain a ravaged civilization decades after environmental and economic collapse.

A mysterious murder in a dystopian future leads a novice investigator to question what she’s learned about the foundation of her population-controlled society.

Decades after economic and environmental collapse destroys much of civilization in the United States, the Coast Road region isn’t just surviving but thriving by some accounts, building something new on the ruins of what came before. A culture of population control has developed in which people, organized into households, must earn the children they bear by proving they can take care of them and are awarded symbolic banners to demonstrate this privilege. In the meantime, birth control is mandatory.

Enid of Haven is an Investigator, called on to mediate disputes and examine transgressions against the community. She’s young for the job and hasn't yet handled a serious case. Now, though, a suspicious death requires her attention. The victim was an outcast, but might someone have taken dislike a step further and murdered him?

In a world defined by the disasters that happened a century before, the past is always present. But this investigation may reveal the cracks in Enid’s world and make her question what she really stands for.

About the author
Carrie Vaughn

CARRIE VAUGHN is the best-selling author of the Kitty Norville series, the most recent of which is Kitty Saves the World. She is also the author of several other books, including the superhero novels Dreams of the Golden Age and After the Golden Age, the young adult novels Voices of Dragons and Steel, and the fantasy novel Discord's Apple. Her Hugo Award–nominated short fiction has appeared in many magazines and anthologies, from Lightspeed to Tor.com, as well as in George R. R. Martin's Wild Cards series. She lives in Colorado with a fluffy attack dog.

Enid came downstairs into a kitchen bright with morning sun blazing through the one window and full of the greasy smell of cooked sausage. Olive already had breakfast?—?sausage, toast, cream—set out on the table. In her dress and apron, her dark hair pulled back with a scrap of cloth, she was already at work?—but shouldn’t have been, in Enid’s opinion.

“How are you feeling?” Enid asked, hoping to keep worry out of her voice.

“I wish people would stop asking me that,” Olive said, not looking up from the batch of dough that she was kneading, folding and punching it into the counter as if she could make it disappear.

Three other batches of dough sat rising in nearby bowls. Serenity household didn’t need that much bread. Olive would probably trade it around the rest of Haven town.

Enid couldn’t help herself. “How long you been up?”

Olive’s smile was strained. “Up before Berol this morning.” Berol worked the early shift at the goat farm outside town. He was usually the first one up.

“You sure you shouldn’t be resting? You don’t have to work so hard.”

You are, Enid thought. Maybe part of Olive resting was just leaving her alone to mourn the miscarriage and recover in her own way. Which maybe meant making too much bread.

“Tea?” Olive asked as Enid sat and took up a knife to smear cream on a slice of toast.

Olive smiled broadly; such a little thing could please her. She bustled between the stove and counter to get the pot ready?—?of course, she already had water heated. When the tea was poured, Enid wrapped her hands around the earthenware mug to soak in the warmth, breathing in the steam, and tried not to nag too much.

They made small talk about the weather and the town, the late summer market coming up and which of the outlying households might travel in, which of their far-off friends might visit. Usual gossip about who was sleeping with whom and whether the grain harvest was going to be over or under quota, and if it was over, would the committee let a couple of fields go fallow next year, though some would grumble that with a surplus the town could support a couple more mouths, hand out a couple more banners. Folk always wanted more banners.

After breakfast Enid helped clean up but only got as far as wiping down the table. Olive had already taken the plate and cup from her hands to put in the washbasin.

“What’re you up to today, then?” Olive asked.

“I’m off to see if the clinic needs any help. Work’s been slow lately.”

When Enid had work, it meant something had gone wrong. “It is.”

She put a vest over her tunic, took her straw hat from its hook by the door, and went outside. Didn’t get much farther than that and stopped, seeing Tomas coming down the walk toward her.

Tomas was a middle-aged man, his silvering hair tied back in a short tail, his face pale and weathered, laugh lines abundant. Average height, a commanding gaze. He wore his investigator’s uniform: plain belt and boots, simple tunic and trousers in a dark brown the color of earth, much deeper than any usual homespun or plain dyed brown.

A charge lit her brain: They had a job.

“Up for a tough one?” he asked in greeting.

“Suspicious death out at Pasadan.” His frown pulled at the lines in his face.

Enid stood amazed. She had investigated thefts and fraud, households that tried to barter the same bags of grain or barrels of cider twice, or that reneged on trades. She’d broken up fights and tracked down assaults. She had investigated bannerless pregnancies—women who’d gotten pregnant either because their implants had failed or, more rarely, because they’d thought to have a baby in secret. Keeping such a thing secret was nearly impossible?—?to her knowledge no one ever had. Though she supposed if they had managed to keep such a secret, no one would ever know. If you asked most folk, they’d say a bannerless pregnancy was the worst of the work she did. The hardest, because she would be the one to decide if the case was an accident that could be made right, or a malicious flouting of everything the Coast Road communities stood for.

Murder had become rare. Much rarer than in the old world, according to the survivor stories. It still happened, of course; it always happened when enough people lived in close-enough quarters. But Enid never thought she’d see one herself. And maybe she still wouldn’t; suspicious death was only suspicious, but Tomas seemed grim.

“Maybe you’d better come in and explain,” she said.

Tomas made himself at home in the kitchen, settling into a chair at the table.

Olive, still at the counter kneading bread, looked up. “Hey! Company! Can I get you some tea?—” The bright greeting was habit; she stopped midsentence, her eyes widening. It was the uniform. Always a shock seeing it, no matter if an old friend like Tomas wore it.

“I’d love some tea, thanks,” Tomas said. “How are you, Olive?” His tone was friendly, casual?—?an everyday question, not the pointed one Enid and the rest of the household had been asking her for the last week, and so Olive was able to give him an unforced welcome.

“Just fine,” she said, wiping her hands on a dishcloth then scooping fresh leaves from their jar into the pot. “If this is about work, I can leave you two alone . . .”

Olive finished prepping the teapot, then went back to her dough, slapping the fourth batch into a smooth loaf, round and puffed and smelling of yeast.

“So what’s this about?” Enid asked. Suspicious death was frustratingly nonspecific.

“A committee member at Pasadan requested the investigation. Man in his thirties, no other information.”

“But are they really thinking murder?”

At the counter, Olive stopped kneading and glanced over, blinking disbelief.

Sam wandered in then, barefoot, shirtless, all wiry body, brown skin, and ropy muscles. Her Sam was thin but powerful. Folk thought he was weak...

"Bannerless is both a fine murder mystery and a multi-layered look at a different kind of society." —Analog Science Fiction & Fact

"[A]n intimate post-apocalyptic mystery ... a deft portrait of a society departed so completely from the complexities of the now-destroyed civilization ... that survivors don’t even understand what it is they’ve lost. ... [A] well-crafted and heartfelt effort." —Kirkus

"Amazing and compelling, Vaughn brings her deft characterization and humanity to bear on a post-apocalyptic world that is all too real." —Tobias S. Buckell, bestselling author of Arctic Rising 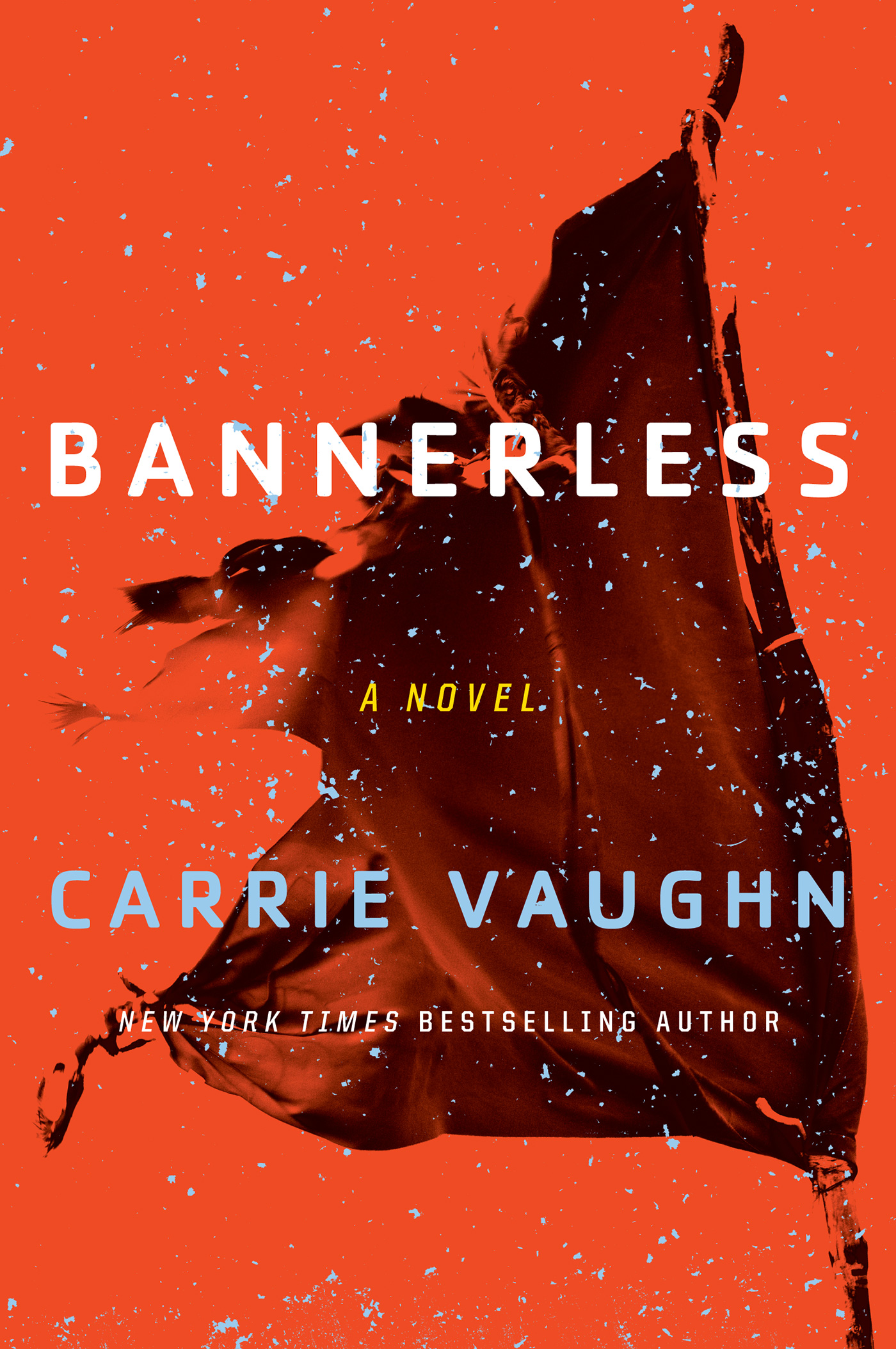