Twelve-year-old Kevin Kim is shocked when a young man, complete with bow and arrows, crash-lands on his bedroom floor—especially when that man, Skillful Archer, claims to be a legendary ruler from ancient Korea. As much as Kevin enjoys teaching Archie about contemporary life and learning about Korean history from Archie’s stories, Kevin needs to help Archie get back home—or history will be changed forever.

About the author
Linda Sue Park

Linda Sue Park is the author of the Newbery Medal-winning A Single Shard, the best-seller A Long Walk to Water, and the highly-praised novel Prairie Lotus. She has also written several acclaimed picture books and serves on the advisory board of We Need Diverse Books. She lives in Rochester, New York, with her family. www.lindasuepark.com, Twitter: @LindaSuePark

Chapter One Falling Off

Kevin ripped the page out of his notebook and crumpled it into a ball, making it as hard and tight as he could. Then he threw it straight up into the air and hit it with his open palm. Wham!

A perfect shot right into the wastebasket. The only good thing that had happened since he’d gotten home from school.

Monday was always his worst day. The weekend was over. Kevin’s parents both worked late every Monday, so the house was empty when he got home. Sometimes he liked being on his own, having the house to himself. But it was February, the bleakest part of winter, and the house felt cold, even with the heat on.

Today school had let out early—something about a half-day staff workshop—which was usually a good thing. But his best friend, Jason, had a dentist appointment and a guitar lesson, and couldn’t hang out after school. The afternoon stretched ahead of Kevin, long and dreary.

Plus it seemed like the teachers always loaded up at some kind of giant homework depot over the weekend, unpacking tons of homework every Monday. Kevin had already finished the math worksheet and answered the unit questions about ecosystems for science.

He’d saved the worst for last.

Social studies. Names and dates and places from ages ago. Boring, boringer, boringest.

It was a page of social-studies homework that was starting its new life in the wastebasket.

Kevin took off his baseball cap, scratched an itchy spot on his forehead, and pulled the cap on again. Then he saw his little rubber bouncy ball on the shelf above the desk. He picked it up and started a game of wall ball. The plunk of the ball against the wall made a steady beat. Thunk–thunk– thunk . . .

It wasn’t—thunk—that he was bad at social studies. Not anywhere—thunk—close to failing. His grades were right in the middle of the class, pretty much where they were for all his other subjects, except for math. He did better at math, although you’d never know it from the way his dad checked his homework. His dad was a genius geek-head number- nerd whiz-brain computer programmer—super good at math. He seemed to know the answer before Kevin had even finished reading the problem. Whenever his dad tried to help him with math homework, it was as if they were speaking two different languages.

Still, math made sense. When you got the answer, you knew it was right; and when you were wrong, you could figure out the mistake. But social studies? Memorizing stuff that he’d never have any use for again, and having to write out answers to those awful essay questions, where right and wrong weren’t clear. Well, no, not exactly—you could be wrong, that was for sure. But you could also be partly right or even mostly right and still get points taken off your answer.

Kevin sighed. He read the question in his social-studies book again.

“Describe the relationship between King George III and the American colonists, and how this relationship led to the Revolutionary War.” Who cares! Kevin raged silently and put a little more into his throw. THUNK. The ball thunked harder against the wall. Why doesn’t stupid King George mind his own business and leave me alone?

What difference did it make what some old king or queen had done hundreds of years ago—thunk— THUD!

The room shook, as if something heavy had fallen on the floor. Kevin missed the catch, and the ball bounced crazily around the room. He turned to see what had made the noise.

“What the—?” Now he could see what had made the thwock: An arrow hitting the wall above his desk.

An arrow that had pierced his baseball cap, lifted it clean off his head, and pinned it to the wall.

Then he heard a man’s voice from somewhere on the other side of the room.

“Show me your hands, Strange One.” A grim voice.

“Stand—slowly—and show me your hands.” Kevin was too scared to do anything but obey. His knees were shaking as he stood up, turned toward the bed, and opened his hands in front of him. His hands were shaking, too. Stop it, he said silently. Somehow seeing them shake made him feel even more scared.

He forced himself to look toward where the voice had come from. About a quarter of a face—half a forehead and one wary eye—peeped out at him from behind the bed.

The owner of that eye was between Kevin and the door. In the next split second, about a billion thoughts ran through Kevin’s head, so fast that it was like not thinking at all.

How the heck did he get in here?—no one else home—windows closed—no good yelling—call 911! Nearest phone in Mom and Dad’s room— gotta get past him—gotta get to the door.

The man must have seen Kevin’s eyes flicker toward the door.

“My arrow would end your life before you took a single step,” he said. “Do not even think of fleeing. And if you are armed, place your weapon on the floor. Now.” The man rose frooooom his crouch holding a bow—a genuine bow-and-arrow bow. He wasn’t aiming at anything in particular, but he was clearly ready to aim it if he had to.

The man glared at him. “If you are lying, it will be the last lie you ever tell.” “Not lying!” Still a squeak, but a louder one.

Kevin could hardly breathe. He made himself take a lungful of air. Those cop shows on television—the victims of the crimes, lots of times they helped the police catch the criminals, didn’t they?       By giving a good description. . . . Okay, concentrate. Get a good look at this guy.

Asian. Long black hair loose around his shoulders. White jacket, baggy white pants. In his twenties, maybe. Kevin realized that he didn’t usually think about adults’ ages, so he wasn’t very good at guessing. Not a teenager, but not as old as Kevin’s parents.

Who was this guy?

They stood in silence for what was probably only a few moments, but it felt to Kevin like a few hours. What’s he going to do now?

He took another breath. Now he could see a leather strap across the man’s body, and the feathered ends of more arrows behind the man’s head. They must be in one of those holders—what was it called? A quiver. That was it.

To his surprise, he heard his own voice. “Wh—what do you want? And how did you get in here?” The man frowned. “Did you not see for yourself?” he demanded. “I lost my balance, fell off the tiger, and landed here.” Fell off a tiger?

"An exciting novel for male readers, both reluctant and engaged."—Kirkus Reviews

"The relationship between Kevin and Archie, and their race against the clock...will keep the pages turning."—Publishers Weekly

"This new offering from the Newbery Medal-winning author of A SINGLE SHARD...will intrigue and amuse readers." *Starred* Review KLIATT

"Effective storytelling, middle-grade humor, and a quick pace" —Bulletin of the Center for Children's Books 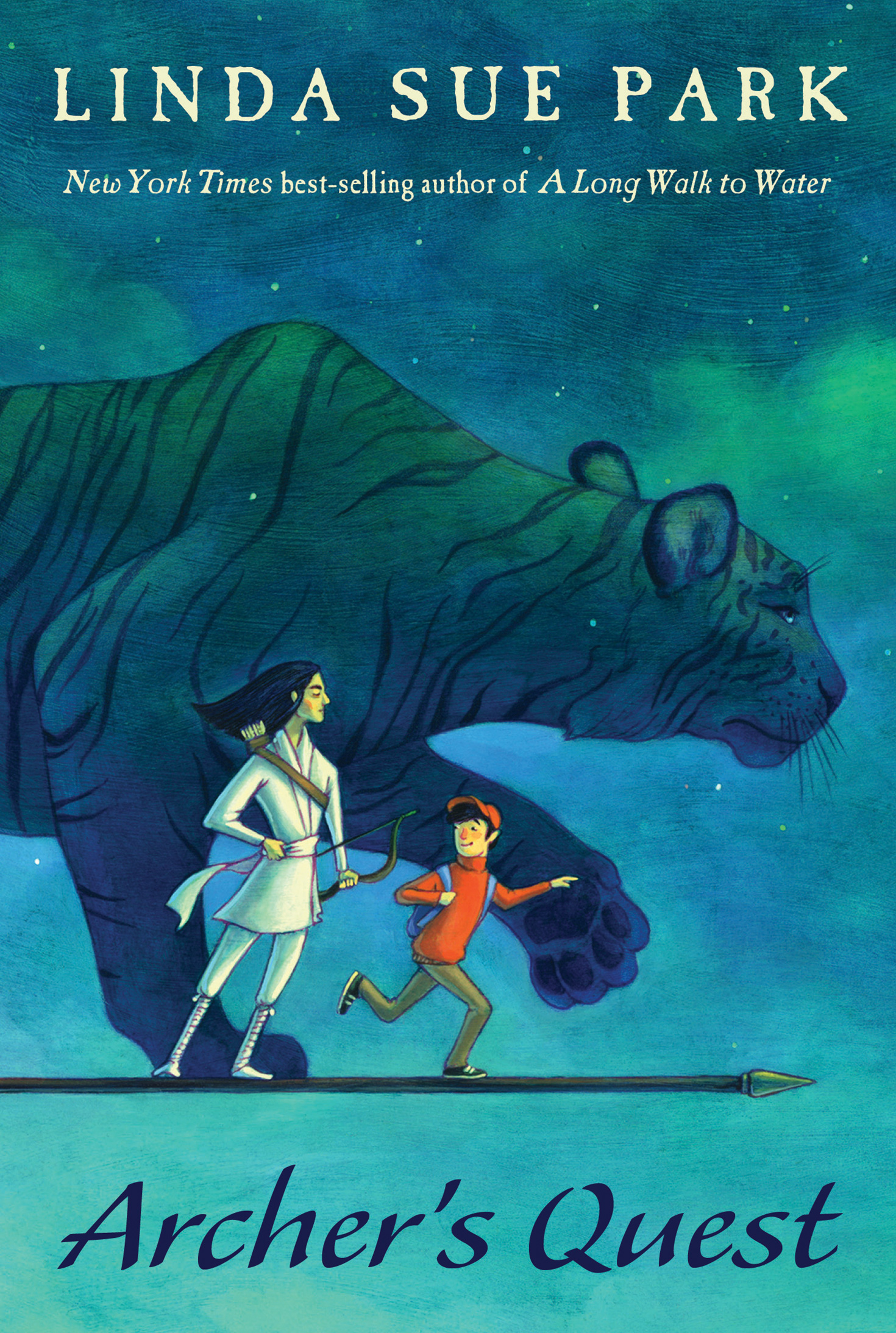