Anastasia on Her Own

Her family's new, organized schedule for easy housekeeping makes Anastasia confident that she can run the household while her mother is out of town, until she hits unexpected complications.

Anybody can run a household. All you need is a schedule. At least, that's what Anastasia thinks. So she and her dad decide to organize Anastasia's frazzled mother and help her run the household smoothly. But when Mom has to go away for a consulting job, Anastasia gets to test out her theory. The household quickly begins to crumble as Anastasia has to face Sam's chicken pox, an unexpected visit from her father's old girlfriend, and her first date ever. How is she supposed to take care of Sam and make a romantic gourmet meal? Anastasia has new-found respect for her mom and the important job she does.

Diane deGroat is the award-winning illustrator of more than 130 books. She lives in Amherst, Massachusetts.

"It's starting to snow," Anastasia announced as she came through the back door. "It's really coming down. Maybe if it snows all night there won't be any school tomorrow—I hope, I hope."

She dropped her schoolbooks on the kitchen table with a thump. "What's for dinner?" she asked her mother. "Why are you just standing there with that sort of frown on your face? And your lips are green. Why are your lips green?"

Mrs. Krupnik sighed. She poked out her tongue, tasted her lips, and made a face. "It's ink," she said. "I was working on some book illustrations all afternoon, and I was using green ink. I can't seem to quit putting the tip of my brush in my mouth."

"It looks gross," Anastasia said cheerfully. "It makes you look like some science-fiction creature."

"Thanks a lot," said her mother crossly. "You really know how to make a person feel terrific, Anastasia." She rubbed her mouth with a damp dish towel; then she stared at the smeared cloth. "Great. Now I've ruined a perfectly good towel."

"Yeah, but your lips look a little more normal. What's for dinner?" Anastasia asked again. "And why are you so grouchy?"

"I'm not grouchy. I'm perplexed." Mrs. Krupnik sat down in a kitchen chair and sighed again. "I'm perplexed because it's time to cook dinner, and I don't know what we're having for dinner. I forgot to take any meat out of the freezer."

Anastasia groaned. She took off her snowy parka and hung it on a hook in the back hall. "Again?" she asked. "You forgot to take meat out of the freezer yesterday and we had to have grilled cheese sandwiches for dinner. And the day before that, you—"

Her mother interrupted her. "I know. Chunky Soup. I just can't seem to get my act together when it comes to making dinner. I'm good at a lot of stuff: illustrating, growing begonias, playing trucks with your brother, even matching up the socks when they come out of the dryer. And I'm a good mother, I guess. Would you say I'm a good mother?"

"Yeah. You're okay," Anastasia said, and opened the refrigerator door. She made a face. "Isn't there anything for a snack, even?"

"Yuck." Anastasia went to the cupboard and took a saltine from the box. She looked at it apathetically and put it back. "Daphne's mother made chocolate chip cookies today. And Sonya's mother made brownies. I pigged out at both their houses on the way home from school. That's why I'm late. Why don't you ever make brownies?"

"I'm a lousy homemaker. I'm a good cook; but how can I cook something when it's all frozen solid? Why do I always forget to take things out of the freezer? And sometimes I forget to do the laundry, too. I bet your friends' mothers all remember to wash the clothes."

"Yeah, probably. Daphne likes her clothes dirty, though. She has a pair of jeans that haven't been washed in a year. They can stand up by themselves. She hides them in her closet, standing up, so her mother won't wash them."

"Maybe that's what I should do. I should hide in a closet, standing up. Then no one would notice what a rotten housekeeper I am." Mrs. Krupnik stood up and went to the pantry.

Anastasia watched her disappear into the small room. "You're not really doing it, are you?" she called. "Hiding in there? Because I'll tell Dad. You can't trust me to keep a secret like that, Mom."

Her mother reappeared, holding a box. "No. If I ever disappear, if I ever go into hiding, it'll be in that big closet off the guest room, the one where the summer clothes are stored. I was just looking in the pantry for something we could have for dinner. What do you think about"—she read the label from the dusty box—"instant meatless enchiladas?"

"You want honesty, or politeness?"

"Yeah, me too." Mrs. Krupnik put the box on the table, and sank into the chair again. "Is it snowing hard? Is the driving terrible? Maybe your dad could go get some pizza."

Anastasia went to the window and rubbed a circle clear with the palm of her hand so that she could look out. "The street's still bare," she said. "Is Dad home yet? I'll go ask him."

Her mother nodded. "He's home early today. He's reading to Sam." She looked gloomily at the window, where Anastasia's circle had filled in again with steam. "Now the window will be all smeared. And I never seem to get around to washing the windows. I am such a hopeless failure at housework, Anastasia. Hopeless. Maybe I should subscribe to Good Housekeeping. Maybe that would help."

"Don't do anything drastic and irrevocable, Mom. Probably there are easier solutions. Dad and I will give it some thought. In the meantime: loaded, no anchovies?"

"And extra cheese," her mother said.

"You got it." Anastasia headed for the study, to find her father.

All four Krupniks sat in the study, in front of a roaring fire in the fireplace, with a huge pizza on the big coffee table. Strings of cheese dangled from their chins. A Beethoven symphony played on the stereo. Outside, the wind howled and a tree branch tapped against the side of the house.

"Isn't this great?" asked Anastasia's father. "Isn't this the best of all possible worlds? Don't you feel as if you have absolutely no problems on a cozy night like this?"

"I have a problem," Mrs. Krupnik said.

"I have a problem, too," Anastasia said.

"I have a big problem," Sam announced, with his mouth full. "Not enough mushrooms on my pizza."

Myron Krupnik sighed. "Well, I'm shot down again. Here, Sam. You can have some of my mushrooms." He scooped them off his pizza slice with his hand, and deposited them on Sam's slice. "Now: Sam, you got a problem?"

"Anastasia?" her father asked. "What's your problem? You want my pepperoni? Am I going to get stuck with a naked pizza?"

"No, my pizza's fine. My problem has to do with school. English class in particular."

Her father grinned and stretched his long legs out toward the fire. "Well, I'm not an English professor for nothing. Ask me anything. You want the major themes in Shakespeare? A brief but scintillating history of Restoration drama? How about...

"As always with the Anastasia stories, pacing and character are excellent, and humor varies from laugh-out-loud farce to wry insights into a loving family." Publishers Weekly 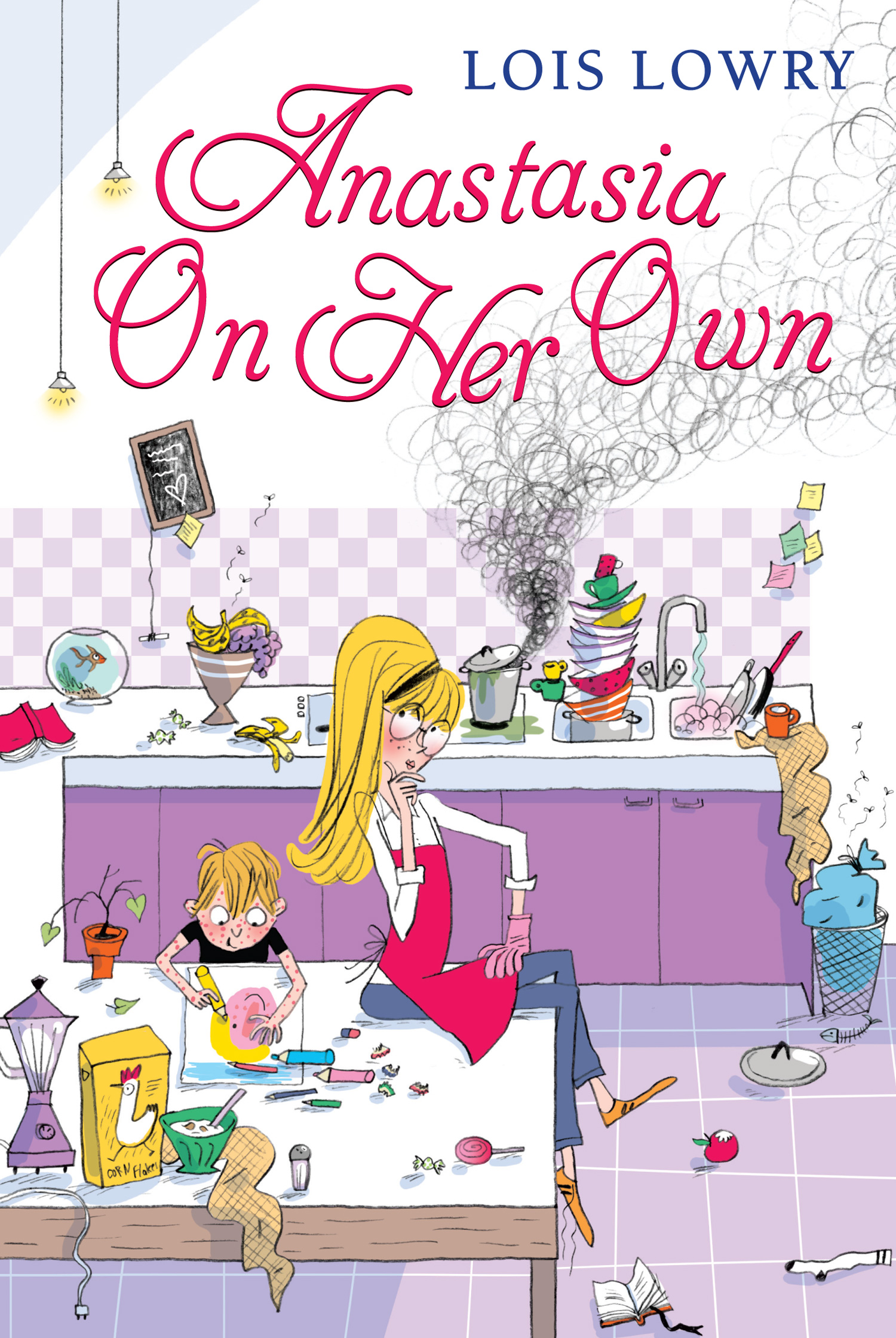