After the Shot Drops

A powerful novel about friendship, basketball, and one teen's mission to create a better life for his family in the tradition of Jason Reynolds, Matt de la Pena, and Walter Dean Myers.

A powerful novel about friendship, basketball, and one teen’s mission to create a better life for his family. Written in the tradition of Jason Reynolds, Matt de la Peña, and Walter Dean Myers, After the Shot Drops now has three starred reviews!

* “Belongs on the shelf alongside contemporary heavy-hitters like Angie Thomas’s The Hate U Give, Brendan Kiely and Jason Reynolds’s All-American Boys, and Nic Stone’s Dear Martin."—School Library Journal, starred review

Bunny and Nasir have been best friends forever, but when Bunny accepts an athletic scholarship across town, Nasir feels betrayed. While Bunny tries to fit in with his new, privileged peers, Nasir spends more time with his cousin, Wallace, who is being evicted. Nasir can’t help but wonder why the neighborhood is falling over itself to help Bunny when Wallace is in trouble.

When Wallace makes a bet against Bunny, Nasir is faced with an impossible decision—maybe a dangerous one.

Told from alternating perspectives, After the Shot Drops is a heart-pounding story about the responsibilities of great talent and the importance of compassion.

About the author
Randy Ribay

Randy Ribay was born in the Philippines and raised in the Midwest on a diet of books and Pokémon cards. Ribay is the author of An Infinite Number of Parallel Universes. A graduate of the University of Colorado and the Harvard Graduate School of Education, Ribay is an English teacher at a private school in Palo Alto, California, and a reviewer for The Horn Book. He lives in Stanford, California.   www.randyribay.com  Twitter and Instagram @randyribay

I’m never sure what to write for the dead. I mean, most of the time when someone hands me the marker at one of these vigils, I just end up laying down something vague and comforting. You know:

See you in heaven.

Something like that. But it never feels right. Never feels like your words will make a difference, like they’ll make his family feel better or stop anyone else from dying for no reason. The person they’re meant for won’t ever read them, so you’re just wasting ink.

But the small, silent crowd shuffles forward, the girl ahead of me passes me a marker, and it’s my turn. I’ve got to write something.

I step up to the big oak tree that stands in the middle of Virgilio Square, its bare branches spread out overhead like skeletal fingers. A white sheet’s been wrapped around its trunk, with TE QUEREMOS, GABE, airbrushed across the middle in big blue letters. I know enough Spanish to know that means “we love you.” Everyone’s notes and signatures are scrawled in the spaces all around it. A bunch of teddy bears and candles sit at the base of the tree in front of a framed photo of Gabe smiling big, all nestled in a nook formed by the roots.

This is where Gabe and his friends were hanging when the shots were fired. Word is the bullet was meant for someone else. Too bad the bullet didn’t know that.

I’m tall, so I decide to add my message up high on the sheet where there’s only a couple others. I take off my glove and shake my hand to try to warm it up, then I lean against the tree and press the tip of the marker against the white cotton. The black ink bleeds into it.

I stay like that for a few moments, adding nothing but a black dot because I still don’t know what to write. I want to put down something meaningful. Gabe lived three streets over and was only a year ahead of me in school. We weren’t real tight, but coming up, he was part of the group of kids we’d always play football or manhunt or whatever with. For some reason, I keep thinking about how he used to eat apples whole, core and all. The rest of us would tell him a tree was going to grow in his stomach if he drank too much water. Funny how your mind picks something small like that to replay.

But I also think about last summer, when I announced that I was transferring from Whitman High, our neighborhood school, to St. Sebastian’s, a private school in the suburbs. Pride in Whitman High’s basketball team runs real deep around our way, so a lot of people didn’t like that one bit. My main man, Nasir, straight up stopped talking to me. But Gabe was cool about it. I was shooting around at the courts one day shortly after the announcement, and some guys started getting in my face about it. Gabe stepped in, calmed them down, and sent them on their way. Then he told me to keep my head up, to not let it get to me. Maybe it’s because he was good at football and so understood what I was trying to do with basketball, but whatever the reason, it meant a lot. Only, I don’t know how to express all this on a bed sheet wrapped around a tree.

I feel the line behind me growing restless, since I’m taking forever, so I give up trying to find the perfect words. I settle for i won’t forget you, and sign my name. Don’t know what happens to us after we die, but if there’s some way he can read this, I know he’ll understand the words I feel but can’t find.

After handing the marker to the woman behind me, I step aside, slip my glove back on, and dig my hands into my coat pockets. I go back to the rear of the crowd that’s gathered in the blocked-off street, bundled up in their winter gear and waiting for his pastor or his parents or whoever to take the mic that’s set up in the patch of grass next to the tree. After a bit, one of the local politicians gets up there and starts going on about how we can’t let something like this happen again. I’ve heard this song before, so my mind drifts.

It’s overcast and frigid. Late February and still hasn’t snowed more than a dusting all winter. Looking up, I wonder if today’s the day. The gray clouds feel heavy as my heart, like they’re about to dump two feet of snow on us at any moment. An airplane crawls across the sky on its way to Philly on the other side of the river, the drone of its engines getting louder as it approaches. A lot of people hate that we’ve got these jets flying past every few minutes, but I don’t mind. It’s like God’s constant reminder that there’s more out there than this. Besides, I kind of like how they make the sun blink when they pass by on a clear day. Of course, right now the sun’s hidden behind the clouds, so the plane passes and then it’s quiet again except for boots shifting, people sniffling, cars passing on the side streets. Some hushed conversations. Quiet, sad laughter. Every now and then someone breaking down.

The politician at the mic is still carrying on, for some reason talking about one of her new initiatives. I stay tuned out, letting my eyes wander across the crowd. There are a lot of families from the neighborhood out here, as well as what seems like most of the kids from Whitman High. The girls hold each other and dab at their eyes while the guys stand around like they’ve got faces cut from stone. A few nod at me, but I hang back.

I mostly stay to myself these days. My interactions in the neighborhood usually go one of two ways: either people try to start something like I betrayed them personally by transferring to St. Sebastian’s, or they try to put all this pressure on me to go back to Whitman High. Either way, I’m not feeling like dealing with any of it, so I turn to leave, even though the memorial’s still going.

That’s when I see Nasir. He’s off to the side with his cousin Wallace. Easy to spot them, what with Wallace’s height making Nasir look even shorter than he would by himself. Both have their hoods up. Nasir stares at the teddy bears at the foot of the tree while Wallace looks all around like he’s got somewhere else to be. I’ll see them on the court tomorrow since they both still play for Whitman, but I consider walking over to say what’s up to Nas. It’s stupid we’re still not talking because I want something more than what Whitman can offer. Out of everyone, I expected him to get that.

But as I’m about take a step toward them, Wallace catches sight of me. I nod at him, but he doesn’t nod back. He holds my gaze for a beat and then nudges Nas. Nas lifts his eyes and they meet mine for a moment. Then he turns his back to me and walks away.

"Ribay’s depictions of Bunny’s and Nasir’s lives are beautifully—if not tragically—drawn...[Ribay] painstakingly shows the state of (sometimes violent) desperation for many young men of the inner city, buoyed only by the distant chance of a better life through stardom. Despite its downbeat aspects, the story nevertheless manages to infuse humanity into the boys’ lives by showcasing the importance of family, the value of friendship, and the importance of courage in the face of difficult situations."  — Booklist

"Without a doubt, Ribay’s compelling book belongs on the shelf alongside contemporary heavy-hitters like Angie Thomas’s The Hate U Give, Brendan Kiely and Jason Reynolds’s All-American Boys, and Nic Stone’s Dear Martin."--School Library Journal, STARRED review

"As the boys take tentative steps to salvage their friendship, they navigate high-stakes choices and consider the value of loyalty, integrity, and sacrifice in a story driven by fast-paced drama on and off the court."-Publishers Weekly, STARRED review

"Readers will race through the intrigue and volatile basketball action to the explosive conclusion."--Horn Book Magazine 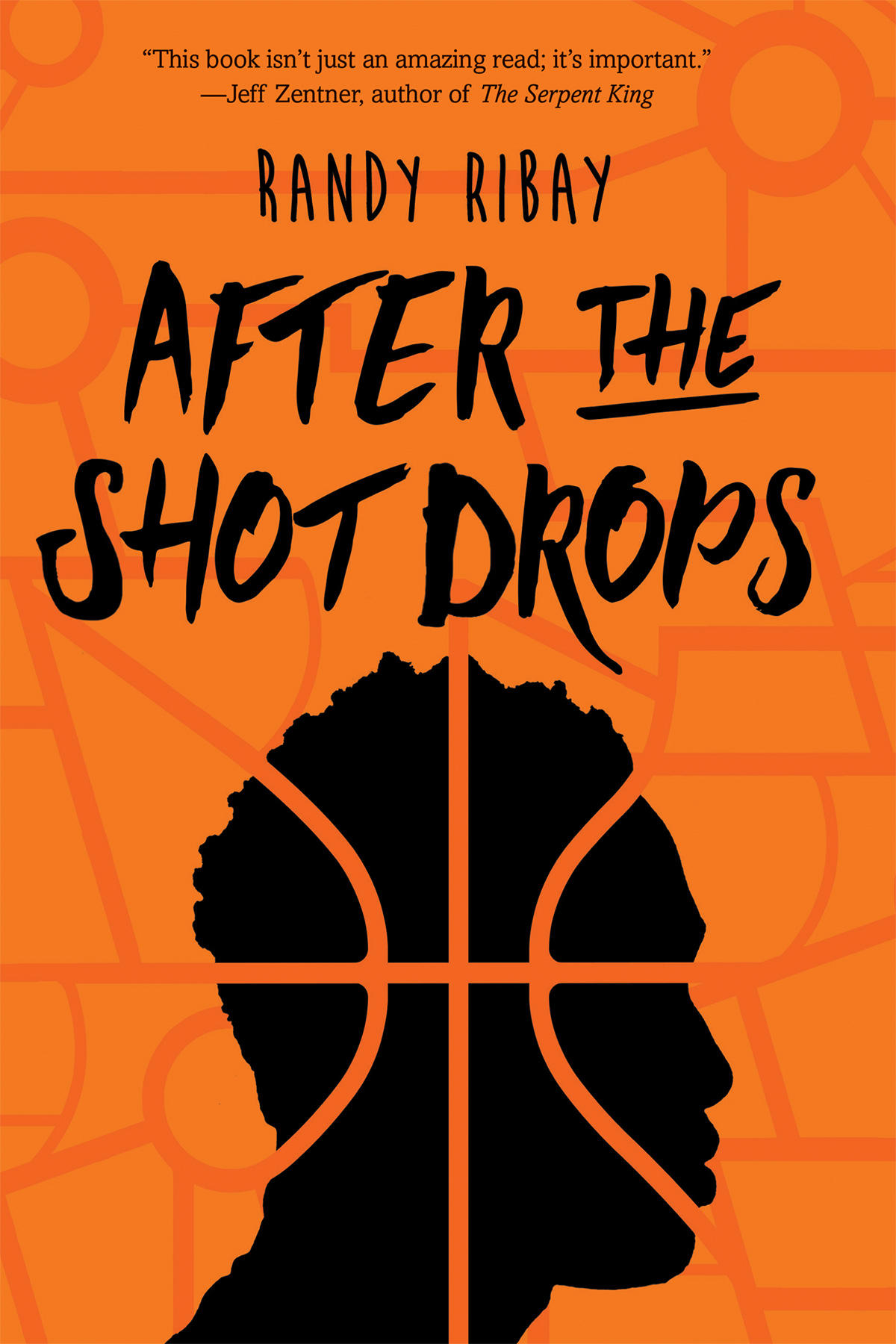