Adeline: A Novel of Virginia Woolf

From a New York Times best-selling author, a boldly imagined portrait of Virginia Woolf that sheds new light on the events that preceded her fatal immersion in the Ouse River in 1941.

“Vincent is a sensitive recorder of a mind’s movements as it shifts in and out of inspiration, and as it fights before submitting to despair.” — New York Times Book Review

With poetic precision and psychological acuity, Norah Vincent’s Adeline reimagines the events that brought Woolf to the banks of the River Ouse, offering us a denouement worthy of its protaganist. Channeling Virginia and Leonard Woolf, T. S. and Vivienne Eliot, Lytton Strachey, and Dora Carrington, Vincent lays bare their genius and their blind spots, their achievements and their failings, from the inside out. And haunting every page is Adeline, the name given to Virginia Stephen at birth, which becomes the source of Virginia’s greatest consolation, and her greatest torment.

Intellectually and emotionally disarming, Adeline—a vibrant portrait of Woolf and her social circle, the storied Bloomsbury group, and a window into the darkness that both inspired and doomed them all—is a masterpiece in its own right by one of our most brilliant and daring writers.

“[An] electrifyingly good novel . . . by a master of discomfort.” — New Statesman

About the author
Norah Vincent

NORAH VINCENT is the New York Times best-selling author of Self-Made Man, as well as two other books. Formerly an op-ed columnist for the Los Angeles Times, she has also contributed regularly to Salon, the Advocate, and the Village Voice. She lives in New York City.

She is lying full down in the bath, with the tepid water hooding her head and lapping just below the vaulted arches of her nostrils. Her breath, shallow and short, ripples the surface gently. She can hear her heart galloping distantly, as it so often does when she is ill, thrumming weakly but so quickly, a soft insistence sucking at the drums of her ears.

The swells of her breasts rise from the water, glistening and cool, the nipples pruned in the morning air. Her long, exhausted feet rise, too, at the far end of her, well out of the water, lean-boned and pale, marred with the angry knots and weals of tortured walks in ill-fitting shoes. They clutch the livid brass spout, flexing and squirming like newborns of an alien brood, quailing under the light.

She drifts in the shallow dream of herself, the lulling of the water, her breath, her heartbeat, audible and palpable at once, the other life inside her going on moment by moment, beat by beat, and all the vying thoughts going with it.

Does the heartbeat have its own thoughts? she wonders. Or does it merely drive and amplify the dread that is coursing through her so wildly these mornings, urging the breath on with it, faster, shorter, sharper. Then, too, there are the headaches mounting all day, clenching her skull from the nape of the neck to the roots of the eyes like a caul of barbed iron. Yet? — ?and here she halts her own description, for the panic must stop. It must. She will not let this happen again.

There is the stall of recognition, for she knows this feeling, this progression of decline, she knows it very well, the consciousness curling under the despair, helpless as a page in the fire, succumbing to the grey, darkening possession. Slowly, slowly comes the blackness with its burning edge-glow eating inward to the center until all the parchment of her right mind is consumed and there is nothing but ash. Flaked and so fragile, it trembles there, fluttering on the balance of the unbearable heat, until at last it collapses and disappears with only the faintest of whists.

She knows what this is like. She watches it, she thinks it. She watches herself thinking it, and that is perhaps? — ?she remembers this particularly? — ?her only defense.

She bends her knees slightly and lets her feet sink back into the water. The toes are cold, the injuries ripe. They melt in the vague warmth and comfort of the bath. She lets herself feel this, every blister weeping, every scar moistening, and she sighs.

Now think, she urges herself. Think it away. I know you can. Concentrate. She furrows her brow and frowns, narrowing her huge, sunken eyes at the bounding rim of the porcelain tub, as if conjuring out of its whiteness the necessary will that is already so weak.

This, at least, she can control, if only she thinks of it well enough, attentively enough, if she makes herself tall and bending like the pair of priestly elms in the garden.

Yes, she thinks, the elms. In the garden.

Her mind begins to coast, moving within the picture, the mood of the morning, through the opened window and the unasserted light, out into the garden, over the moistening grass, the vaporous earth, and the insects hard at work, then up, as groundwater in root and trunk and branch and twig, all through the fretwork of elms. She thinks of them, swaying softly, outward to the smallest filigree of veins, the harmless air gossiping through their varied separations, making the tender leaves susurrate.

Now, she enjoins herself, as them. Think as them. She loosens her grip, rolls her scapulae down flatter against the belly of the tub, closes her bulbous eyes, breathes in once deeply, then sighs slowly, very slowly, eking out the breath. She begins to glide into the vision, just there, on the shushing in her flooded ears. She breathes again, and the exaggeration of the sound fills her, releases her.

My branches, she thinks. My branches are wide and firm, yet delicate, intricate, sensitive as flesh, clean and open to the air as two clear ramifying lungs. I am these trees, these elms? — ?she loosens, breathes again, enfolding and dispersing the breath.

“Breathe.” She hears her sister Nessa’s tender voice intoning out of the past. “Breathe, Virginia, breathe.”

And she does, pushing her breasts high above the water line and down again; she watches their ringed shorelines advance and recede over the puckered skin. She listens to the breath slowing, deepening. She thinks as the elms, of being the elms, healing the air. She thinks of her sister’s hands on her chest those days so long ago in the sickroom, lightly resting, the fingers faintly exploring, as if reading the Braille of her brocaded dress. Distress. She raises her mouth above the water and says this aloud, quietly, “Distress. The dress.”

Then, as if startled by the sound of her own voice, she sits upright with a great sloshing urgency, her buttocks squealing on the porcelain, her knees bucking, legs tensing straight and splashing. She listens to the esses of the spoken words hiss as they race around the bathroom, and she says them again, louder.

She cocks her head to one side and considers the sounds and meanings of words, the one creating the other, the sound of the thing being the thing, the original thing, blazing through the world in true spirit? — ?dress,distress. The sound of it and the light of it as one. The wavelengths traveling in tandem.

And yet, she squints disapprovingly, the wretched intellect at work. Always the masculine mind interferes, taking the magic out of sounds and shutting it into words. The very word for this, the academic word? — ?onomatopoeia? — ?sounds like what it is, a chained sprite falling down the stairs. She laughs at this, and the sound of her laugh pops around the bathroom.

She is breathing harder again, she notices. Too animated once more by the thoughts. Too many thoughts. Too fast. She tries to think again of the elms and calm herself. Calm, she tells herself. Calm. You cannot take all of this at once. Again she thinks of Nessa’s hands on her and the voice guiding her. She folds her hands in her lap, in the pool of water there. She drops her shoulders, circles her neck.

But then she stops abruptly, midturn, and looks up.

“That’s it,” she says, quite loudly now, the outburst crashing back and forth between the tiled walls like a dropped pot.

“Eureka in the bath, you infernal Greek! I have it.”

This she has absolutely shouted, and she regrets it at once. She puts her hand over her mouth like

“Vincent is a sensitive recorder of a mind’s movements as it shifts in and out of inspiration, and as it fights before submitting to despair.” — Carlene Bauer, New York Times Book Review

“Adeline is a moving . . . portrait of what it means to be brilliant and tormented. Understanding Woolf’s darkness is as difficult as understanding some of her work, but Vincent rises to the challenge, creating something beautiful in the process.” — City Journal

“Readers in search of a crash course on the Bloomsbury circle and the machinations of Woolf’s fevered mind will appreciate Vincent’s attempts to illuminate both, but her dark portrait of Woolf’s agonizing journey through a life marked by psychic pain will hold the most appeal for those already familiar with this sad story of genius and madness.” — Kirkus Reviews

“[An] electrifyingly good novel . . . by a master of discomfort.” — New Statesman

“Norah Vincent’s new novel, Adeline, is a bold portrait of Virginia Woolf from her conception of To the Lighthouse in 1925 to her suicide in 1941 . . . The reader comes to understand Virginia’s complex artistic process and her lifelong struggle with mental illness.” — Historical Novel Society

“Adeline is an intimate portrait of a sister, a wife, a woman, and most importantly, an artist. In this vivid, deeply moving novel, Vincent brings us beyond the world of legend directly into the passions, the struggles, the ambitions, and finally the genius that is Virginia Woolf.”— Alison Smith, author of Name All the Animals

“Spare, exacting, deeply imagined, Adeline brings us as close as we are likely to get to the secret negotiations that fed Woolf’s art.” — Kathleen Hill, author of Who Occupies This House

“Adeline is a singular feat of the creative imagination in which the reader is taken inside the consciousness of a major artist in a way that is both completely believable and commandingly compelling. It is wholly worthy of its great subject.” — Terry Teachout, author of Duke: A Life of Duke Ellington 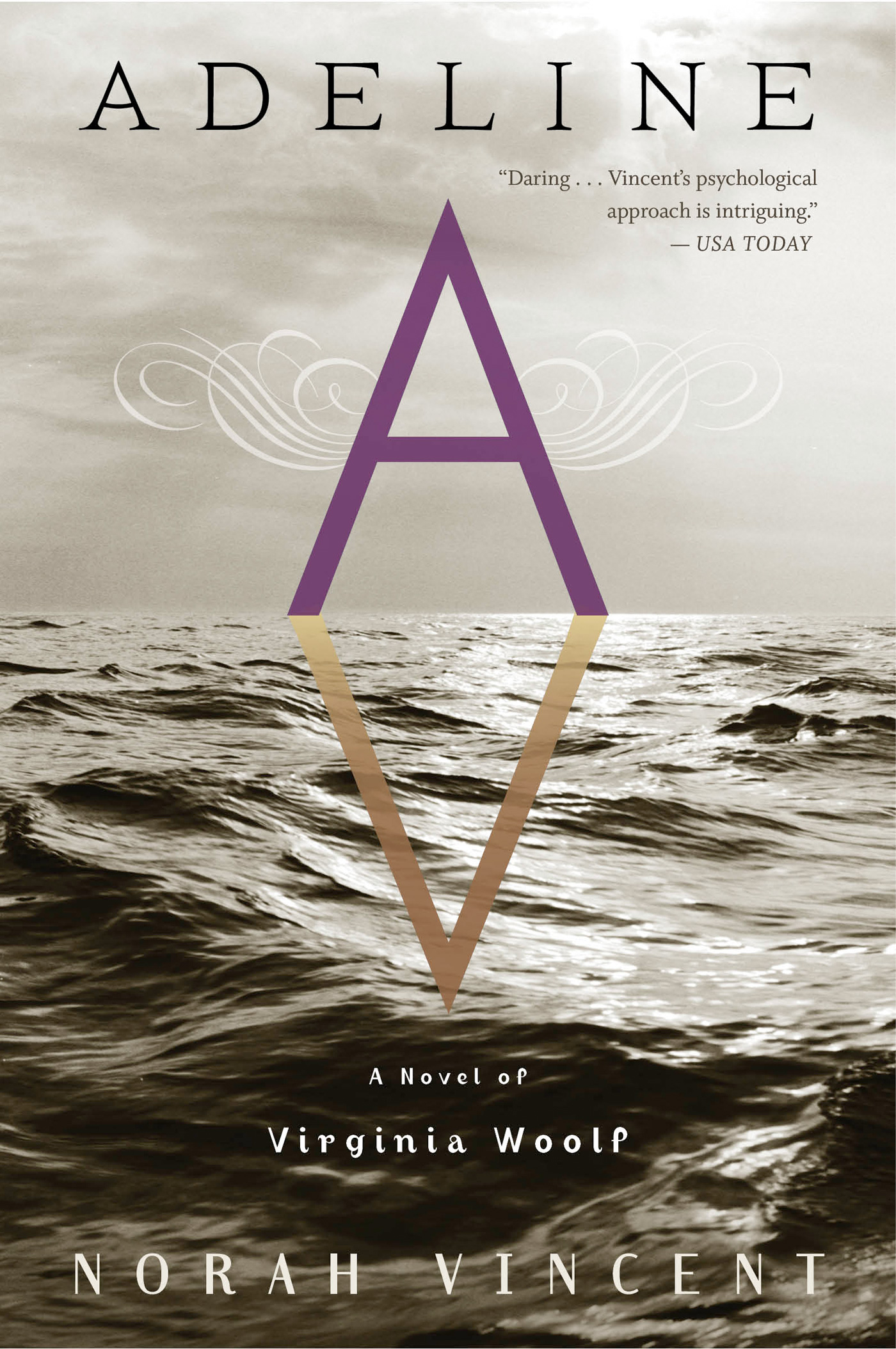