There are laughs as well as heartbreak in a tale of an unlikely first love.

It all starts when Marisa picks up the wrong cell phone. When she returns it to Rene, she feels curiously drawn to him. But Marisa and Rene aren't exactly a match made in heaven. For one thing, Marisa is a chola; she's a lot of girl, and she's not ashamed of it. Skinny Rene gangles like a sackful of elbows and wears a calculator on his belt. In other words, he's a geek. So why can't Marisa stay away from him?

Includes a glossary of Spanish words and phrases.

At fourteen Marisa welcomed any excuse to miss school. But today she had a good reason for cutting class. Alicia, her best friend, lay in the hospital with a broken leg and a broken heart, all because her boyfriend had crashed his parents' car when a tire blew. The leg had broken in the crash, but her heart had broken when the glove compartment opened on impact and shot out a photo of stupid Roberto with his arm around another girl.

Marisa was off to give her homegirl a meaningful hug. "He's such a shisty rat," she growled as she pictured that no-good Roberto, an average-looking fool whose fingers were always orange from Cheetos. She, too, savored that junk food snack, but-she argued-at least she always licked her fingers clean. But not him! Stupid jerk! Big pendejo! How could Alicia stand his face? She was always treating him to food and paying for gas for their car rides into the country.

Marisa's anger was deflected to a passing station wagon that nearly hit her as she started across the street. "You estúpido!" she spat as she threw her hands into the air in anger. The pair of eyes she saw in the rearview mirror were old and could have belonged to any of her six aunts. Ay, Chihuahua, how Marisa's grandmother bore children, all female, all large, all different as pepper from salt. Marisa admonished herself for yelling at the elderly driver. "Maybe it was one of mis tías," she told herself, and her rage dissolved. Her thoughts returned to Alicia tucked away in a hospital bed and then quickly to Roberto, the rat. If my boyfriend was cheating on me . . . She was brooding when she remembered that she didn't have a boyfriend. So what was the worry? She found herself shrugging and thinking she'd never have a boyfriend as she peeked at her stomach with its roll of fat.

"Room 438," she told herself as the salmon-colored hospital came into view. "That's where my homegirl is. She's gonna be hecka surprised." Marisa swallowed her fear. Hospitals were where you went to die. She remembered Grandma Olga's last days. Her grandmother, struggling with cancer, rolled from her side to her stomach to sitting on the bed and dangling her rope-thin legs. Dying, Marisa had thought then, was a matter of getting comfortable.

Marisa rode up in an elevator between two male nurses with paper bootees on their shoes. She herself had considered becoming a nurse, but that was years before, when she had dolls whose arms would fall off, and she would stick the arms back on only to have them fall off again. The dolls, she remembered, lay under her bed, their eyes open but not taking in a whole lot.

The elevator opened with a sigh. Marisa stepped out, glancing slowly left and then right. "Room 438," she muttered as she cut a glance to a man in a wheelchair pushing himself up the hallway by the strength of his thin arms. A bottle of clear fluid hung on a steel pole behind him, and clear tubes were delivering that fluid into his arms.

Marisa grimaced. She would hate to have something stabbed in her all day. Does it hurt like a pinch? she wondered. A bee sting?

When she located the room, Alicia was staring gloomily toward the ceiling. For a moment Marisa figured that Alicia was appealing to God in heaven. But as she stepped inside, she realized that Alicia's eyes were raised to a muted television. On the screen some carpenter was carrying a sheet of plywood over his head. It was a boring home-decorating show, the kind her mother liked to watch on Saturday afternoons.

Alicia lowered her eyes to her friend, and for a few seconds her face was expressionless. Then it slowly blossomed with a smile. Her eyes narrowed into little slits of light.

"Marisa," Alicia greeted in return. She raised a feeble hand and Marisa grasped her friend's hand and gave it a loving squeeze, then smothered Alicia with a hug.

"How's it? Your pata?" Marisa asked as she sat on the edge of the bed.

"It's not my leg," Alicia replied, and rapped her heart as if it were a door. "It's this that's hurting."

Marisa's eyes flashed as her mind fluttered with the image of Roberto. Sure, he got in trouble with his parents for crashing the car, but wasn't Alicia worse off?

"I told you he was no good," Marisa offered in judgment. "Is your mom really mad?" Alicia's mother was an accountant and was not only good at numbers but also at keeping tabs on her daughter's whereabouts.

"A little bit. Actually, a lot," Alicia answered weakly. Her tiny hands squeezed her blanket. Marisa, a big girl whose shadow covered other people's when they walked together, couldn't help but think of Alicia as a little doll. She couldn't keep herself from saying, "You look so tiny, girl."

This truth made Marisa smolder. How dare Roberto cheat on my little homegirl! How she would love to get him into a headlock and bounce his head off a wall. She had watched enough wrestling on TV to know how to do it.

"My mom says I can't see him anymore."

"My mom would be hecka mad," Marisa said. "And my dad-" She shrugged. She wasn't clear how her dad would view such a tragedy. He was a lot more carefree. But her mom? She pictured her mother at the stove smashing beans into refritos and yelling over the radio that her daughter was headed down the wrong road, blah, blah, blah.

"What are you doing here? How come you're not at school?" Alicia asked.

"Seeing you," Marisa replied. "I just walked right out of school and two miles to get here." She pinched her stomach. "I'm gonna start losing weight."

"¡Mentirosa!" Marisa swiped a light slap on her friend's arm. She repeated how she had bounced down the stairs of second-floor East Hall and walked out of Washington High School during morning break. The security guard had even waved good-bye. That was how much they didn't care.

Alicia placed a hand over her mouth and laughed. "You're mala. Your mom and dad's going to find out."

"So?" But Marisa was worried. Her mom had threatened that if she got in trouble again at school-she had been suspended for a week for fighting over lip gloss she had lent some girl-she was going to send her away to live with one of her aunts. Marisa didn't want to get in trouble again, but the idea of going to a new school appealed to her. She knew that she would miss a few friends, but she could always depend on her cell phone. Each month she was loaded with free minutes.

Alicia's eyes suddenly filled and two lines of tears raced down her cheeks.

Marisa thumbed the salty track making its way down to the left side of Alicia's chin, and she was amazed how cool the tear was. If she were crying, her tears would be as hot as motor oil.

"Do you want me to hit him?" Marisa asked. Her hand was closed into a rock-hard fist.

"Roberto!" Roberto was tall but lanky. Marisa imagined that she could lower her shoulder and bulldoze him into the lockers and follow up with a smacking slap to his face. This, too, she had learned from watching wrestling. Who said TV was a waste of time?

"You go, girl." Marisa smiled and leaned her face into her friend's shoulder. They hugged and told each other how they couldn't depend on anyone except each other. Marisa's own tears began to roll hot from her eyes. But the girls stopped hugging when Marisa heard a voice behind her. The voice belonged to someone Marisa knew. Her mother!

Busted! Marisa thought as she swiped away the tears from her eyes and sat up.

"Hi, Mrs. Rodriguez," Alicia greeted. "I asked Marisa to come and see me."

Marisa's mother stood with her hands propped on her hips. Her eyes narrowed darkly. She seemed to

"The tough-girl/good-guy romance is a refreshing twist, and Marisa and Rene are unique and long-overdue characters."--The Bulletin 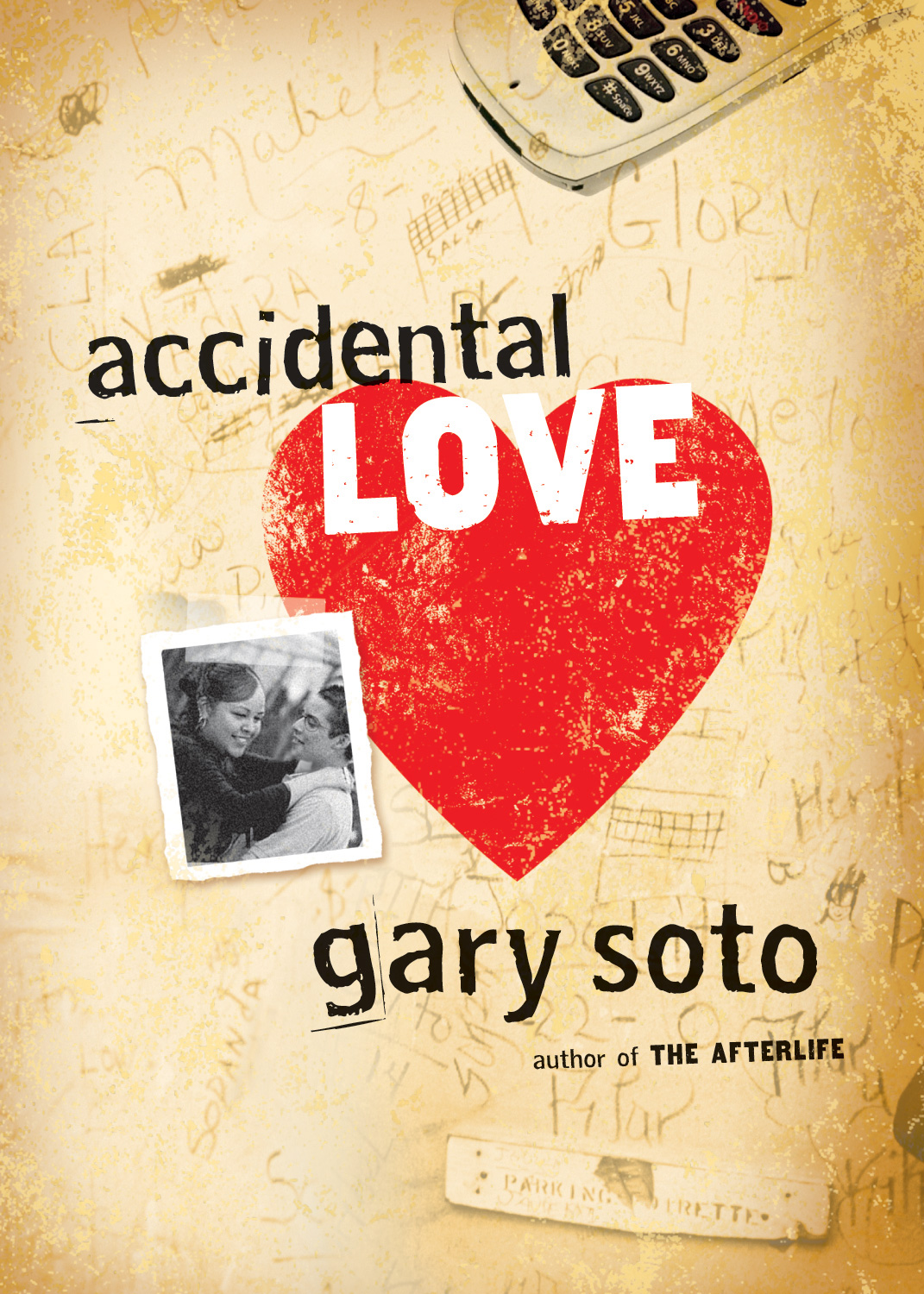