A Soldier of the Great War

From acclaimed, award-winning novelist Mark Helprin, author of Winter's Tale, a lush and literary epic about love, beauty, and the world at war.

From acclaimed novelist Mark Helprin, author of Winter's Tale, a lush and literary epic about love, beauty, and the world at war.

Alessandro Giuliani, the young son of a prosperous Roman lawyer, enjoys an idyllic life full of privilege: he races horses across the country to the sea, he climbs mountains in the Alps, and, while a student of painting at the ancient university in Bologna, he falls in love.

Then, the Great War intervenes.

Half a century later, in August of 1964, Alessandro, a white-haired professor, tall and proud, meets an illiterate young factory worker on the road. As they walk toward Monte Prato, a village seventy kilometers away, the old man??—??a soldier and a hero who became a prisoner and then a deserter, wandering in the hell that claimed Europe??—??tells him how he tragically lost one family and gained another. The boy, envying the richness and drama of Alessandro's experiences, realizes that this magnificent tale is not merely a story: it's a recapitulation of his life, his reckoning with mortality, and above all, a love song for his family.

About the author
Mark Helprin

ON THE ninth of August, 1964, Rome lay asleep in afternoon light as the sun swirled in a blinding pinwheel above its roofs, its low hills, and its gilded domes. The city was quiet and all was still except the crowns of a few slightly swaying pines, one lost and tentative cloud, and an old man who rushed through the Villa Borghese, alone. Limping along paths of crushed stone and tapping his cane as he took each step, he raced across intricacies of sunlight and shadow spread before him on the dark garden floor like golden lace.

Alessandro Giuliani was tall and unbent, and his buoyant white hair fell and floated about his head like the white water in the curl of a wave. Perhaps because he had been without his family, solitary for so long, the deer in deer preserves and even in the wild sometimes allowed him to stroke their cloud-spotted flanks and touch their faces. And on the hot terra cotta floors of roof gardens and in other, less likely places, though it may have been accidental, doves had flown into his hands. Most of the time they held in place and stared at him with their round gray eyes until they sailed away with a feminine flutter of wings that he found beautiful not only for its delicacy and grace, but because the sound echoed through what then became an exquisite silence.

As he hurried along the Villa Borghese he felt his blood rushing and his eyes sharpening with sweat. In advance of his approach through long tunnels of dark greenery the birds caught fire in song but were perfectly quiet as he passed directly underneath, so that he propelled and drew their hypnotic chatter before and after him like an ocean wave pushing through an estuary. With his white hair and thick white mustache, Alessandro Giuliani might have seemed English were it not for his cream-colored suit of distinctly Roman cut and a thin bamboo cane entirely inappropriate for an Englishman. Still trotting, breathless, and tapping, he emerged from the Villa Borghese onto a long wide road that went up a hill and was flanked on either side by a row of tranquil buildings with tile roofs from which the light reflected as if it were a waterfall cascading onto broken rock.

Had he looked up he might have seen angels of light dancing above the throbbing bright squares-in whirlwinds, will-o'-the-wisps, and golden eddies-but he didn't look up, for he was intent on getting to the end of the long road, to a place where he had to catch a streetcar that, by evening, would take him far into the countryside. He would have said, anyway, that it was better to get to the end of the road than to see angels, for he had seen angels many times before. Their faces shone from paintings; their voices rode the long and lovely notes of arias; they descended to capture the bodies and souls of young children; they sang and perched in the trees; they were in the surf and the streams; they inspired dancing; and they were the right and holy combination of words in poetry. As he climbed the hill he thought not of angels and their conveyances, but of a motorized trolley. It was the last to leave Rome on Sunday, and he did not want to miss it.

THE ROAD traveled relatively straight to the top of the hill, but descended the opposite side in switchbacks that, unlike their mountain counterparts, cupped fountains in the turns. Stairs cut through its shuttling, and Alessandro Giuliani took them fast and painfully. He tapped his cane at each step, partly in commemoration, partly in retaliation, and partly to make it a metronome, for he had discovered long before that to defeat pain he had to separate it from time, its most useful ally. As he went down, the walking became easier, and a short distance from the crossroads where he would board the streetcar he found himself on ten flights of gradual stairs and landings in a thick green defile. Through a confessional grille of tangled trees in a long dark gallery penetrated at intervals by the blinding sun, he saw the pale circle of light that marked his destination.

Drawing closer, he knew from the open blue awning that-unlike everything else in Rome that day-the cafe that seemed to exist solely for people who awaited the rarest streetcar in Italy had not shut its doors. He had neglected to buy presents for his granddaughter and her family, and now he knew that he would be able to take something to them. Though his great-granddaughter would not be pleased by gifts of food, she would be asleep when he arrived, and in the morning he would walk with her to the village to get a toy. Meanwhile, he would buy some prosciutto, chocolate, and dried fruit, hoping that these would be appreciated as much as his more elaborate presents. Once, he brought an expensive English shotgun to his granddaughter's husband, and at other times he arrived with the kinds of things that were to be expected from a man who had many years previously outrun any possible use for his money.

The tables and chairs on the terrace of the cafe were crowded with people and bundles. The overhead wires neither vibrated nor sizzled, which meant that Alessandro Giuliani could walk slowly, buy provisions, and have something to drink. On this line the cables always began to sing ten minutes before the tram arrived, because of the way it gripped them as it rounded the hill.

Walking through the thicket of chairs, he glanced at people who would ride with him on the way to Monte Prato, though most would leave the streetcar in advance of the last stop, and some even before it lowered its whip-like antennae, switched to diesel, and ran far beyond the grid of electrical wires from which it took its sustenance on the streets of the city. It had rubber tires and a pantograph, and, because it was a cross between a trolley and a bus, the drivers called it a mule.

A construction worker who had made for himself a hat of folded newspaper thrust his right hand into a bucket to encourage a listless squid that Alessandro knew would have to die within the hour from lack of oxygen. The headline running along the rim of the hat said, inexplicably, "Greeks Make Bridges of Gold for the Rest of 1964." Perhaps it was related to the Cyprus Crisis, but, then again, Alessandro thought, it might have had something to do with sports, a subject of which he was entirely ignorant. Two Danes, a boy and a girl in blue-and-white student hats, were at one corner of the terrace, seated next to German army rucksacks almost as big as they were. Their shorts were as tight as surgeons' gloves, and they were so severely and brazenly entangled in one another that it was impossible to tell his smooth and hairless limbs from hers.

Several poor women of Rome, perhaps sweepers or cafeteria workers, sat together over glasses of iced tea and were overcome now and then with the hysterical giggling born of fatigue and hard work. Sometimes they were free for a few days to go back into the country, where they had once been sylph-like little girls completely different from the obedient cardigan-covered barrels they had become. As Alessandro went past they lowered their voices, for although he was courtly and deferential, his age, bearing, and unusual self-possession awakened their memories of another time. They looked down at their hands, remembering the discipline not of the factory, but of childhood.

At another table were five strong men in the prime of life. They were truck drivers, and they wore sun glasses, striped shirts, and faded army clothing. Their arms and wrists were as thick as armor; they had huge families; they worked impossibly hard; and they thought they were worldly because they had driven over the high Alpine passes and spent time with blonde women in German bordellos. Without thinking, Alessandro formed them into a squad of soldiers in a war that had long been over and would soon be forgotten, but then, catching himself, he disba... 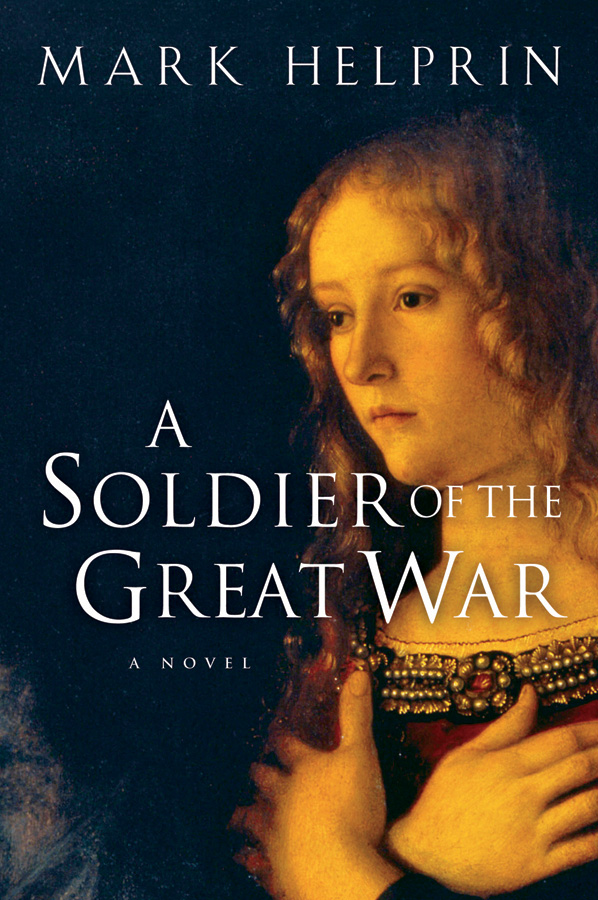