A Sliver of Light: Three Americans Imprisoned in Iran

Three Americans captured by Iranian forces and held in captivity reveal, for the first time, the full story of their imprisonment and fight for freedom.

“A Sliver of Light weaves a spellbinding tale of hard-won survival at the intersection of courage and love — the love of friends struggling to support one another in wretched circumstances, the unyielding bedrock of mothers' love for their long-lost children, and the fiercely tested love of three people for the family of humankind. It is a triumph of writing born of a triumph of being.” — Andrew Solomon, author of Far from the Tree and The Noonday Demon

In summer 2009, Shane Bauer, Josh Fattal, and Sarah Shourd were hiking in the mountains of Iraqi Kurdistan when they unknowingly crossed into Iran and were captured by a border patrol. Wrongly accused of espionage, the three Americans ultimately found themselves in Tehran’s infamous Evin Prison, where activists and protesters from the Green Movement were still being confined and tortured. Cut off from the world and trapped in a legal black hole, Bauer, Fattal, and Shourd discovered that pooling their strength of will and relying on one another was the only way they could survive.

In A Sliver of Light, the three finally tell their side of the story. They offer a rare glimpse inside Iran at a time when understanding this fractured state has never been more important. But beyond that, this memoir is a profoundly humane account of defiance, hope, and the elemental power of friendship.

“Riveting and necessary and illuminating in countless unexpected ways. The hikers have pulled off the almost impossible task of making from their hellish experience something of beauty and grace.” — Dave Eggers

“A Sliver of Light is the record of a human rights triumph, a moving memoir by three individuals who found the strength to survive.” — San Jose Mercury News

About the author
Shane Bauer

SHANE BAUER is an investigative journalist and photographer. He has reported from locations such as Iraq, Sudan, Chad, Syria, Yemen, Israel/Palestine, and California's Pelican Bay supermax prison. He has written for Mother Jones, The Nation, Salon, Los Angeles Times, San Francisco Chronicle, Christian Science Monitor, and others. He has received the Hillman Prize for Magazine Journalism, the John Jay/ H.F. Guggenheim Award for Criminal Justice Reporting, and many other national awards. He was also a finalist in the Livingston Award for journalists under 35.

JOSHUA FATTAL is a historian with a background in environmental sustainability. Prior to his arrest in Iran, he taught in Asia about the political economy of healthcare and was co-director of an environmental education center in Oregon. Joshua has also taught nonviolent communication, qi gong, and yoga. He lives in Brooklyn, New York with his partner and child.

SARAH SHOURD is a writer, educator and Contributing Editor at Solitary Watch currently based in Oakland, California. Sarah has done international human rights work with the Zapatista indigenous movement in Chiapas, Mexico; organized with women's groups against unsolved murders of sweatshop workers in Juarez, Mexico; and taught for the Iraqi Student Project while living in Damascus, Syria. After her wrongful imprisonment in Iran, Sarah has become an advocate for prisoners' rights, focusing her writing, speaking, and theater projects on the wide-spread use of prolonged solitary confinement in U.S. prisons and jails. She has written for the New York Times, San Francisco Chronicle, CNN, and Newsweek/Daily Beast, and contributes a blog to Huffington Post.

I stir out of sleep. The air is so fresh and cool, it’s almost minty. Distantly, I hear a stream purl. Sarah and Josh are lying on both sides of me, unmoving. A deep predawn glow infuses everything. A bat cuts jaggedly through the air. I sit up and stretch my arms and back, which sends bursts of energy through my body. Today, we are going to hike. There are few things I love more than this.

Brown mountains jut up over either side of us, mottled with specks of green bushes and patches of yellow grass that looks like lion’s fur. The trail we started on last night snakes upward, weaving a thin little thread through the valley. We wash our faces in a nearby stream. We fill up our many little water bottles, eat some bread and cheese, and walk.

Josh is light spirited and contemplative, jumping from one rock to the next as we set off up the valley. He’s so good at shaking off weariness, putting that wholesome smile back on his face. Sarah and I trail behind him, holding hands and weaving our way between the rocks. None of us speaks, except to point out the occasional curiosity, like empty goat pastures hemmed in by short walls of piled-up rocks or the occasional cement prayer niches with arrows that point the pious toward Mecca.

Hours pass as we walk. Porcupine quills, cat feces, and perfectly round spiky purple flowers appear sporadically on the slowly thinning trail. Josh is a hundred feet ahead. A cloud of yellow dust is pluming behind him, rising above the dry grass and hanging in the hazy air. Are we on a human-made trail, or did some goat slice through this endless meadow, creating this tiny track we are trudging on? The heat is growing and I am easing into that state where my body is tiring, but I just march on autopilot, pulled by something toward the top of the mountain. It must be 11 a.m. How long have we been walking? Five hours?

At some point, we stop to drink from our water bottles, which are starting to run low, and Josh mentions that we’re heading east. “We could just keep going and go to Iran,” he jokes. I remark that Iran must be at least a hundred miles away. We keep walking.

We reach what looks like an old, disused road, clogged with large rocks. We decide to temporarily jettison some of our things, cramming blankets and books under a bush and building a little cairn on the side of the road to remind us where the stash is. Then we plod upward, winding up the switchbacks. The ridge has to be close. The horizon — saddled between two peaks — has seemed directly in front of us for a while now. At the top, we’ll turn back. We’ll have to, or we’ll miss Shon. He, the fourth of our group, stayed back in Sulaimaniya to rest up and is going to meet us back where we started this morning. We’ll have a night around the fire before we catch a bus back up through Iraqi Kurdistan to Turkey, through the flat expanse of the Syrian Desert, and back to our little home, tucked into the beautiful sprawl and bustle of Damascus.

As we walk, I notice a cigarette pack on the ground. There must be people nearby. Maybe we’ll find a village, have some tea, chat with the locals.

We pass an ancient-looking, broken-down stone shack on the side of the road. Sarah wants to turn back; I can feel it. Her energy is nervous, but she is trying to hide it. I’m used to this. She is strong and brave, but she’s often a bit anxious when we leave cities, even when we’re in the United States. She fears things like mountain lions and lone men. But she doesn’t like to let the fear dictate her actions. She also doesn’t like to be coddled, so I let her deal with it herself. Anyway, I want to get to the top.

“Would you rather . . .” she starts to ask Josh and me, before trailing off momentarily. She likes to play this game when we walk and, I think, when she’s uncomfortable with the silence. I love how she always starts it the same way, stating the first clause, then deciding on the second clause while the listener waits. Now she asks, “Would you rather get surrounded by five mountain lions right now, or five members of al-Qaeda?”

I think for a few seconds. “Probably mountain lions,” I say. “We could probably scare them off. I think if we were grabbed by al-Qaeda, we wouldn’t have much of a chance.”

“Don’t you think you could reason with al-Qaeda, though?” Josh says. “Speak to them in Arabic? Tell them you don’t hate Muslims? Tell them you’re critical of our government?”

“I don’t think it would matter,” I say. “But okay. I’ll go for al-Qaeda. Maybe you’re right. Maybe we could try to reason with al-Qaeda. There would be no reasoning with five mountain lions.”

Sarah chimes in. “I would definitely choose al-Qaeda . . .” She pauses. “You guys, I think we should turn back. It’s getting hot and we’re almost out of water.”

Then, as if on cue, a tiny runnel trickles across the road. We don’t have to go back just yet. The water is coming from a little spring, dribbling into a small, cement, human-made basin. I pour the water over my head by the bottleful and laugh as it runs down my skin. I can’t remember the last time I felt so free. Free of time. Free of worry. Free of the heat.

Could I be more content, more happy? We take a break, our insides cooled after five hours of walking, and fall asleep in the shade. I wake to the phone ringing. It’s Shon. He is on a bus and getting ready to come to meet us. How could the phone get coverage way up here? “Just go to the waterfall,” I tell him. “It’s right past the big campgrounds with hundreds of people camped out. There are a bunch of tea vendors and stands selling souvenirs and stuff. From the waterfall, walk straight up the trail and up the valley. We’ll be coming down soon. There is no way we can miss each other.” I hang up as Sarah and Josh stir out of sleep.

“You guys,” Sarah says with hesitancy in her voice. “I think we should head back.”

“Really?” Shane sounds surprised. “How could we not pop up to the ridge? We’re so close.”

I turn to Sarah, thinking of her question about al-Qaeda and the mountain lions. I think of another discussion we had, wondering if Kurdish rebels would be in these mountains of northern Iraq and how nervous she was when we were hiking last night. It seems like she’s wanted to turn back for a while but kept quiet. Then I look at Shane and say, “Sarah feels strongly about this. I think we should talk it through.”

I’m being sensitive to Sarah, but Shane knows me well — he knows I want to reach the top, and he asks, “Josh, what do you want to do?”

“Well,” I say, “I think we should just go to the ridge — it’s only a couple minutes away. Let’s take a quick peek, then come right back down.” Sarah agrees.

Just as we’re setting out, Sarah stops in her tracks. She looks concerned.

"Riveting and necessary and illuminating in countless unexpected ways. The hikers have pulled off the almost impossible task of making from their hellish experience something of beauty and grace." — Dave Eggers

"A Sliver of Light weaves a spellbinding tale of hard-won survival at the intersection of courage and love — the love of friends struggling to support one another in wretched circumstances, the unyielding bedrock of mothers' love for their long-lost children, and the fiercely tested love of three people for the family of humankind. It is a triumph of writing born of a triumph of being." — Andrew Solomon, author of Far from the Tree and The Noonday Demon 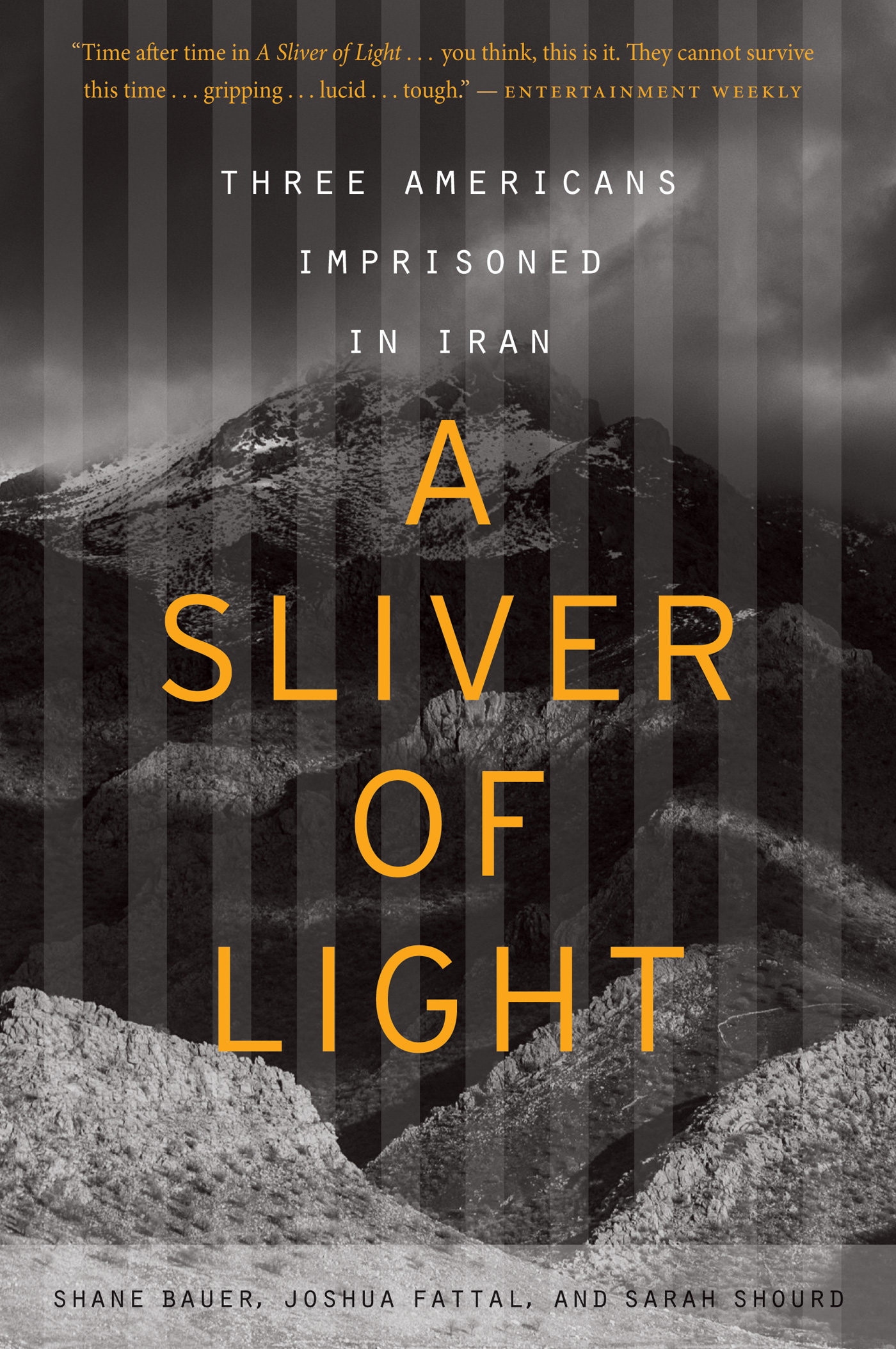