A Slave No More: Two Men Who Escaped to Freedom, Including Their Own Narratives of Emancipation

Slave narratives, some of the most powerful records of our past, are extremely rare, with only fifty-five post–Civil War narratives surviving. A mere handful are first-person accounts by slaves who ran away and freed themselves. Now two newly uncovered narratives, and the biographies of the men who wrote them, join that exclusive group with the publication of A Slave No More, a major new addition to the canon of American history. Handed down through family and friends, these narratives tell gripping stories of escape: Through a combination of intelligence, daring, and sheer luck, the men reached the protection of the occupying Union troops. David W. Blight magnifies the drama and significance by prefacing the narratives with each man’s life history. Using a wealth of genealogical information, Blight has reconstructed their childhoods as sons of white slaveholders, their service as cooks and camp hands during the Civil War, and their climb to black working-class stability in the north, where they reunited their families.

In the stories of Turnage and Washington, we find history at its most intimate, portals that offer a rich new answer to the question of how four million people moved from slavery to freedom. In A Slave No More, the untold stories of two ordinary men take their place at the heart of the American experience.
About the author
David W. Blight

DAVID W. BLIGHT is the director of Yale University’s Gilder Lehrman Center for the Study of Slavery, Resistance, and Abolition and a professor of American history. His books include Race and Reunion, which won the Frederick Douglass Prize, the Lincoln Prize, and the Bancroft Prize. He lives in New Haven, Connecticut.

Day after day the slaves came into camps and everywhere the “Stars and Stripes” waved they seemed to know freedom had dawned to the slave.

John M. Washington was born a slave on May 20, 1838, in Fredericksburg, Virginia. Washington begins his narrative with the wry comment that he “never had the pleasure of knowing” his mother’s owner, Thomas R. Ware, Sr., who died before John was born. And he supposes “It might have been a doubtful pleasure.” So far as can be determined, Washington also never knew his father, though we can assume he was white. As an autobiographer reconstructing his own youthful identity, Washington says revealingly: “I see myself a small light haired boy (very often passing easily for a white boy).”1

With these words Washington recollects the complicated story of so many American slaves—mixed racial heritage. The offspring of sexual unions between black women and their white male owners or pursuers suffered a legacy of confusion, shame, and abuse, but they also occasionally benefited from economic and social advantages, especially in towns and cities. Washington was one of more than 400,000 out of four million American slaves by 1860 who were officially categorized as “mulatto” or other terminology to distinguish a person of some white parentage. From 1830 to the Civil War, the state of Virginia especially had gone to great effort, although unsuccessfully in practical terms, to legally establish a color line marking who was white and who was not.2 White friends, and perhaps relatives, aided John’s education and opportunities early in his life. But in Fredericksburg and elsewhere, due to his mother’s status and color, he was considered a chattel slave until the war came.

Exactly who Washington’s father was, and how John got his middle initial and last name, have been impossible to trace. A John M. Washington, a distant cousin of President George Washington, lived in Fredericksburg, went to West Point in the 1810s, became an artillery officer, and died in a shipwreck in 1853. But no evidence exists for his patrimony of John. Ware had four sons by 1838, ages twenty-six, twenty-four, twenty, and eighteen. Any of them could have been Washington’s father, although only the two younger ones, John and William, seem to have been residents of Fredericksburg at the time.3

Washington’s story is much clearer on his mother’s side. Women determined, protected, and supported John’s life chances. His maternal grandmother was a slave named Molly who was born in the late 1790s and owned by Thomas Ware. Molly, called “my Negro woman,” is acknowledged for her “faithful service” in Ware’s 1820 will, in which he bequeathed her and her children (valued at $600) to his wife, Catherine (who would eventually be John’s owner). By 1825 Ware’s estate inventory lists Molly and four children; John’s mother, Sarah, was the oldest at age eight. Molly would have another four children by the 1830s. In June of 1829 this strong-willed mother misbehaved (perhaps running away) in such a manner that Catherine Ware arranged with a punishment house to execute a “warrant against Molly and for whipping her by contract $1.34.”4 Perhaps Molly’s defiance was sparked because her sister, Alice, had just been sold away for $350.

We can only imagine the sorrow and scars in Molly’s psyche, a woman whose life was spent nursing white children as well as her own and serving the extended Ware family. But she would live to join her grandson on their flight to freedom in 1862. She died a free woman near her daughter, grandson, and great grandchildren. Whether she departed as a sad or a joyful matriarch, John Washington does not tell us. His silence about Molly may reflect that he was telling only his own heroic story, which did not allow for his grandmother’s saga, but it could also represent a part of his family history he was not prepared to expose.

Sarah Tucker, John’s mother, was likely born in January 1817. Who the men fathering all these children were remains a researcher’s mystery. Sarah probably also had a white father; she is described in various documents as being “bright mulatto” and short in height.5 Ware did not own any men who could have been either Sarah’s or John’s father. When Sarah gave birth to John in 1838, she was a twenty-one-year-old who had somehow learned to read and write, a less unusual accomplishment for urban slaves in small households than for plantation slaves.

In 1832, when Sarah was a teenager, Catherine Ware married Francis Whitaker Taliaferro, a plantation and slave owner with four grown children. The Taliaferros had their own slaves and hired others when they needed extra hands, as was the common practice; in 1836 Mr. Taliaferro advertised for “ten able-bodied men for the remainder of the year,” offering twelve dollars per month to their owners. The Taliaferros also hired out their own slaves on occasion, including Sarah. With John in tow, Sarah was hired out in 1840 to a farm thirty-seven miles west of Fredericksburg, owned by Richard L. Brown of Orange County.6

Washington yearningly describes his eight years in the countryside in the idyllic opening section of his narrative. His mother must have worked as a house slave because he played “mostly with white children.” He spent summers “wading the brooks” and climbing ridges from which he could see the “Blue Ridge Mountains” and a “moss covered wheel . . . throwing the water off in beautiful showers” at a mill on the Rapidan River. Among these pleasant memories is his going to a circus at Orange Court House, where he got lost from his family, and his attending services with his mother at the “Mount Pisgah” Baptist church, a large structure “with gallerys around for colored people to sit in.” John loved the “tall pines” that surrounded the church and remembers the “cakes, candy and fruits” sold under the great trees on Sundays. He relished his recollections of “corn shuckings,” a “hog killing,” and a joyous Christmas celebration. He also remembered his mother teaching him the child’s bedtime prayer, “Now I lay me down to sleep, I pray the Lord my soul to keep,” and the “Lord’s Prayer.” And perhaps most important, by the time he was eight, Sarah had taught him the alphabet.7

Equipped with literacy, if not with good spelling or grammar, Washington brilliantly uses all of these images of nature as backdrop for his descent into the hell of slavery. He employs natural beauty as a metaphor for freedom and a reminder of the terror of bondage, knowing that the glories of nature can both inspire the soul and mock human sadness. He worries at one point that his “minute events” would not “interest” his reader, and then he quickly moves his story forward.

These early years were both easy

PRAISE FOR ROWING TO FREEDOM

"Rowing to Freedom is a remarkable and rare volume. We are fortunate that David Blight, a foremost authority on the slave narrative, has applied his considerable skills as historian and detective to these extraordinary stories of 'ordinary' men. As if their own stories of slavery and the flight to freedom were not fascinating enough, Blight has filled in the details of their lives after slavery in a way that re-creates both the turbulence and nearly unfathomable joy of emancipation. The narratives of Turnage and Washington will surely take their place among the most moving and instructive examples of the genre." --Henry Louis Gates, Jr.

"Together, Blight's meticulous research and the previously unknown autobiographical writings of these two men bring to life with unprecedented power the human dimensions of slavery and emancipation." --Eric Foner

"Rowing to Freedom presents two of the most significant finds in the entire genre of slave narratives and of the primary material from the Civil War." --David Levering Lewis, Pulitzer Prize–winning author of W. E. B. Du Bois: Biography of a Race, 1868–1919

"David Blight combines the authority of a great historian with the humanistic zeal of a novelist . . . Rowing to Freedom is a compelling account of two men of remarkable courage who, by writing down their stories, sought to make themselves visible. Neither man could have wished for a more sympathetic or knowledgeable interpreter than David Blight." --Caryl Phillips, author of A Distant Shore 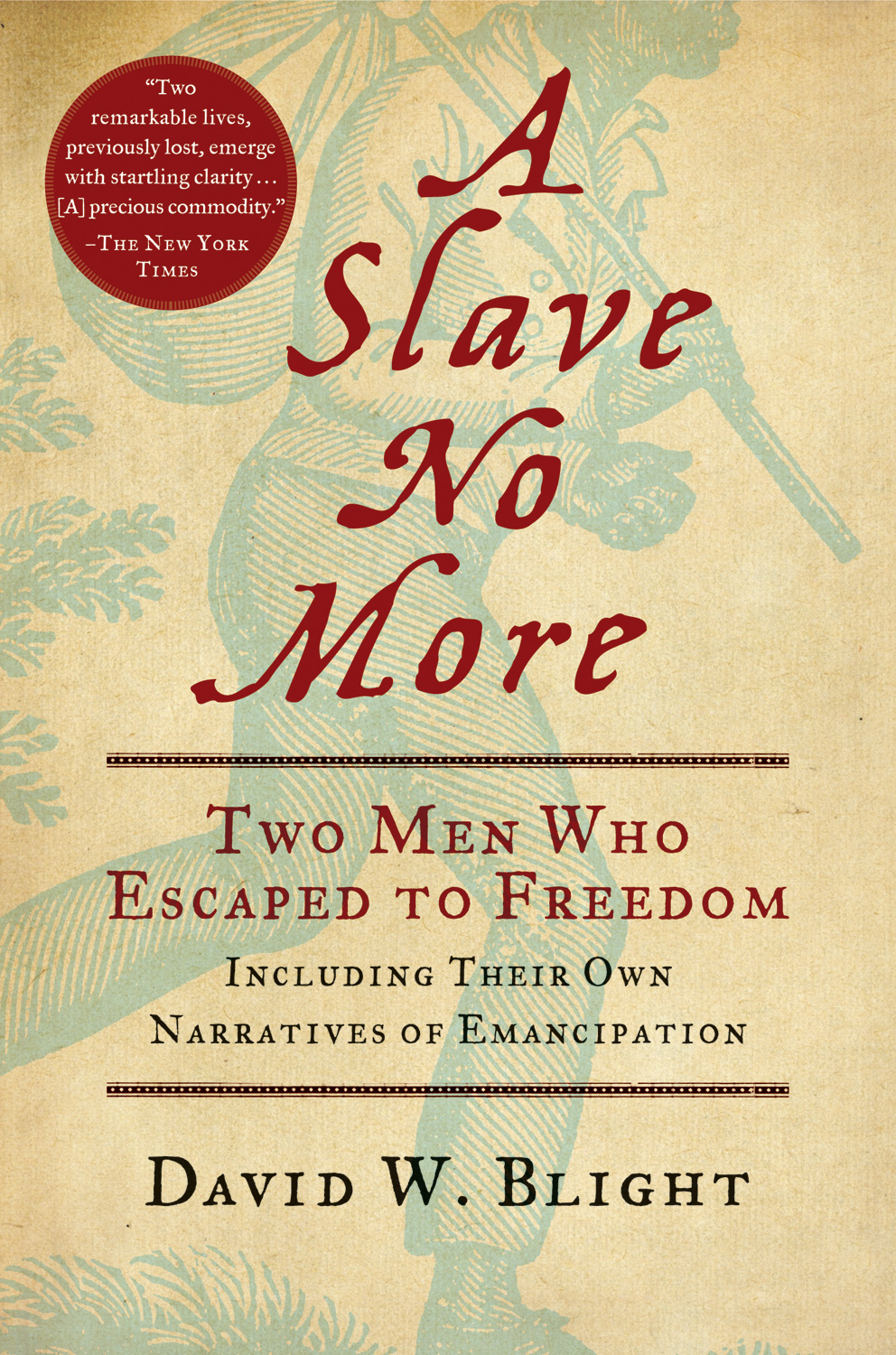