A Plague of Bogles

by Catherine Jinks
$16.99
The adventures continue for the young assistants to the best monster catcher in Victorian London! In this thrilling companion to How to Catch a Bogle, Jem becomes a bogler’s apprentice and gets the fright of his life in a city where science clashes with superstition and monsters lurk in every alley.

“This is top-notch storytelling, full of wit, a colorful cast of rogues, and delectable slang.” —Publishers Weekly, starred review of How to Catch a Bogle

Jem Barbary spent most of his early life picking pockets for a wily old crook named Sarah Pickles—until she betrayed him. Now Jem wants revenge, but first he needs a new job. Luckily Alfred the bogler, the man who kills the child-eating monsters that hide in the shadows of Victorian London, needs a new apprentice. As more and more orphans disappear under mysterious circumstances, Alfred, Jem, and Birdie find themselves waging an underground war in a city where science clashes with superstition and monsters lurk in every alley.

Catherine Jinks grew up in Papua New Guinea and now resides in the Blue Mountains of New South Wales, Australia. She is a three-time winner of the Children's Book Council of Australia Book of the Year award, and in 2001 was presented with a Centenary Medal for her contribution to Australian Children's Literature. Her popular works for young readers include the Evil Genius series, The Reformed Vampire Support Group, and the How to Catch a Bogle trilogy. Visit her website at www.catherinejinks.com.

The man stationed at the door was small and stout. He had a red face, blue eyes, and wispy gray curls. His satin-breasted coat was trimmed with silver lace. His top hat was the color of mulberries.

“Walk in! Walk in! Now exhibiting!” he boomed. “The best show in London, ladies and gentlemen! A menagerie of mythical beasts! Living, breathing monsters for only one penny!”

The narrow shop front behind him was plastered with brightly colored advertisements. One of them showed a picture of a very young girl cracking a whip at something that looked like a giant toad.

“See our griffin! See our mermaid! See our erlking!” cried the man in the purple hat, tapping at the picture with his bamboo cane. “See Birdie McAdam, the Go-Devil Girl, tame a fierce bogle and a dainty unicorn!”

Across the road, Jem stopped short. He stood goggle-eyed as the crowds surged past him. In one hand he carried a cheap broom. On his feet he wore nothing but a thick layer of mud.

For a moment he stared at the man in the purple hat. Then he darted forward, dodging a pile of horse manure and the rattling wheels of a carriage.

“See the world’s greatest novelties, ladies and gentlemen! Marvel at the legendary two-headed snake of Libya! Touch a genuine dragon’s egg for only one penny!” The red-faced showman raised his voice a little, drowning the chant of a nearby coster selling nuts and whelks. “Now exhibiting! Satisfaction guaranteed! The world’s greatest wonders, here in Whitechapel Road!”

He was perched high on a wooden box, with a good view of all the bobbing umbrellas that filled the street. But he didn’t see Jem until the boy tugged at his coat.

Glancing down, the man saw only a filthy little crossing sweeper in a ragged blue shirt and striped canvas trousers, torn off at the knee. A cap like a cowpat cast the boy’s gleaming brown eyes into shadow. It also concealed most of his thick, black, glossy hair—which was his best feature, though it made his head look too big for his body.

“Please, sir, I’m a friend o’ Birdie McAdam. Will you let me in? She’ll want to say hello.”

Jem flushed. “I ain’t gammoning you, sir! Jem Barbary’s the name. Why, Birdie and me—we used to knock around Bethnal Green together when she were just a bogler’s girl. Ask her if we didn’t!”

The only reply was a quick swipe with the bamboo cane, which left a red welt on Jem’s knuckles. He jumped back, grimacing. Then he retreated a few steps to take stock of the exhibition venue. It was a small, two-story building wedged tightly between a pastry shop and a public house. Over the door was a faded sign, but Jem couldn’t read it. Nor could he see any side alleys piercing the impenetrable wall of shop fronts breasting the street.

But the public house was on a corner, and would probably have a rear yard of some kind. Jem’s gaze moved up a drainpipe, along a brick ledge, and across a roof that bristled with chimneys. He’d burgled many a house in the past, and this one was no strongbox. He thought that he could probably find another way in—without paying a penny for the privilege.

“Begging your pardon, lad, but is it true?” a soft voice suddenly asked. “Do you really know Birdie McAdam?”

Startled, Jem spun around. He found himself staring up at a pretty young woman in a velveteen mantle. She had rosy cheeks, gray eyes, and lots of rich brown hair piled up under a hat that was barely big enough to support all the feathers, flowers, veils, and ribbons sewn onto it.

She was sheltering from the rain under a pink silk parasol.

“What’s it to you?” he said, wondering why a decent-looking female would approach him in the street like a common beggar. The young woman glanced around nervously before leaning down to address him.

“I’m Mabel Lillimere,” she murmured. “I’m a barmaid at the Viaduct Tavern, on the corner o’ Newgate Street. If you are a friend o’ Birdie’s, and can persuade her to talk to me, I’ll stump up your fee so as you and I both can get in.” Eyeing his grubby face with a touch of suspicion, she added fiercely, “But if you’re lying—why, I’ll box your ears so hard, you’ll have your left ear on the right side o’ your head and your right ear on the left!”

This threat didn’t worry Jem. He’d suffered worse. “Why not talk to her yerself?” he wanted to know.

“Because she’ll not see me! Or so he says.” Mabel gestured at the man in the purple topper, who was now reminding all the damp pedestrians scurrying past him that Birdie McAdam was “well known to the public” owing to “newspaper reports of her bogle-baiting prowess.” “Mr. Lubbock, he calls himself,” Mabel continued. “Claims he’s in charge. Says Birdie’s not inclined to speak to the public. Says she’s too shy, and needs to rest her voice.”

Jem snorted. “Well, that’s a flam,” he declared. “Birdie’s as forward as they come. Did you offer him extra?”

“Then he’s a-humming you.” His suspicions confirmed, Jem scowled at Mr. Lubbock. “I’ll wager Birdie ain’t here. Last time I saw her, she were living with a fine lady near Great Russell Street, eating plum cakes every day and wearing lace on her petticoats. Why would she want to come back to the East End and work in a penny gaff like this’un, when there’s fine folk as think she’s too good for the life?”

Mabel’s face fell. Her troubled gaze slid toward Mr. Lubbock. “You think that there feller is lying, then?”

“Why not?” Jem shrugged. “He’s a slang cove. Lying’s what they do best.” Studying the barmaid with frank curiosity, he added, “Why d’you want to speak to Birdie? You can’t be kin—she ain’t got a soul to call her own.”

Mabel hesitated. At last she said, “I read about Birdie in the newspapers last summer, and never thought of her again till I passed this here gaff. Then I saw her name and recollected how she killed them monsters that you find in privies and coal holes and chimneys and such.” Seeing Jem shake his head, Mabel frowned. “Didn’t she?”

“Birdie helped kill ’em,” Jem corrected. “She were bait for the bogles. Alfred Bunce did all the killing.”

“The bogler. Didn’t you read about him, too? He were in the papers, same as Birdie.”

"Well paced and with details and dialogue that transport readers to the streets (and sewers) of Victorian London, there is much to enjoy in this excellent adventure series."

"With a linear narrative, plenty of action and dialogue, and an ample smattering of colorful Victorian street language, this is a speedy, characterful yarn."

"Jinks reprises her previous bogle-ish title with lots of action and an undercurrent of sly humor, supplying return readers with all the gory monster-vanquishing they have come to expect...Sounds like another winner in the works." 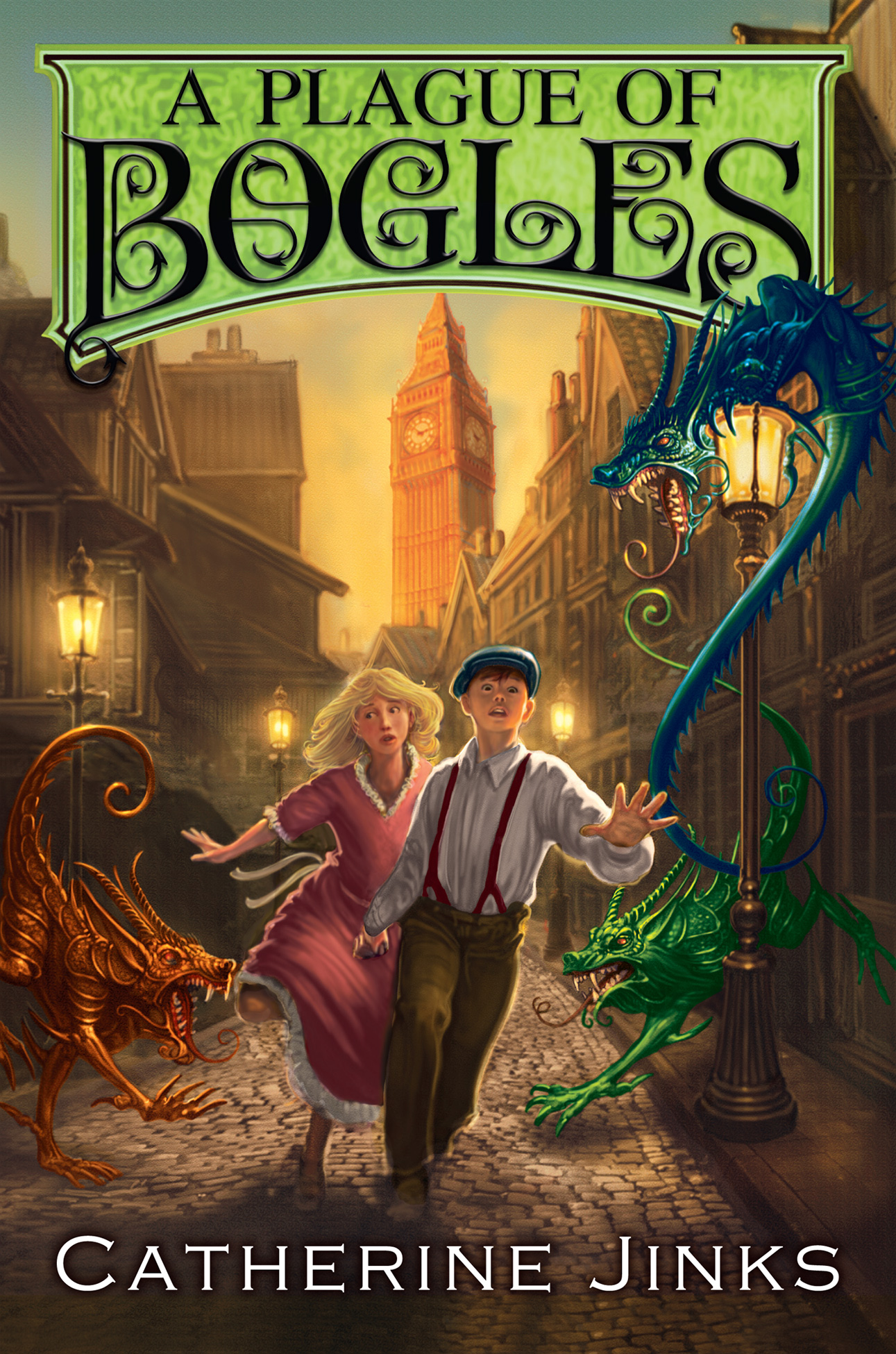