A deadly pandemic, a budding romance, and the heartache of loss make for a stunning coming-of-age teen debut about the struggle to survive during the 1918 flu.

For Cleo Berry, the people dying of the Spanish Influenza in cities like New York and Philadelphia may as well be in another country—that's how far away they feel from the safety of Portland, Oregon. And then cases start being reported in the Pacific Northwest. Schools, churches, and theaters shut down. The entire city is thrust into survival mode—and into a panic. Headstrong and foolish, seventeen-year-old Cleo is determined to ride out the pandemic in the comfort of her own home, rather than in her quarantined boarding school dorms. But when the Red Cross pleads for volunteers, she can't ignore the call. As Cleo struggles to navigate the world around her, she is surprised by how much she finds herself caring about near-strangers. Strangers like Edmund, a handsome medical student and war vet. Strangers who could be gone tomorrow. And as the bodies begin to pile up, Cleo can't help but wonder: when will her own luck run out?

Riveting and well-researched, A Death-Struck Year is based on the real-life pandemic considered the most devastating in recorded world history. Readers will be captured by the suspenseful storytelling and the lingering questions of: what would I do for a neighbor? At what risk to myself?

An afterword explains the Spanish flu phenomenon, placing it within the historical context of the early 20th century. Source notes are extensive and interesting.

About the author
Makiia Lucier

Makiia Lucier grew up on the Pacific Island of Guam and holds degress in journalism and library studies from the University of Oregon and the University of Wisconsin–Milwaukee. She is the author of A Death-Struck Year, Isle of Blood and Stone, and Song of the Abyss. www.makiialucier.com Twitter: @makiialucier

In the coming weeks, I would wish that I had done things differently. Thrown my arms around my brother, perhaps, and said, I love you, Jack. Words I hadn’t spoken in years. Or held on a little tighter to Lucy and said, Thank you. Thank you for watching over me, when my own mother could not. But the distance between hindsight and foresight is as vast as the Pacific. And on my family’s last evening in the city, my attention was fixed not on gratitude, certainly, but on myself. My sad, sorry, unambitious self.

Famous American Women: Vignettes from the Past and Present. Curled up on the settee, I read the book from first page to last, hoping inspiration would strike and put an end to my misery. This! This is who you were meant to be, Cleo Berry. Go now and live your life.

So far no luck.

I reviewed. Abigail Burgess Grant, lighthouse keeper at Matinicus Rock, Maine. I tried to picture it: the windswept coast, the salty air, the nearest neighbor miles away. No, I thought. Too lonely. I turned the page. Isabella Marie Boyd, wartime spy. Too dangerous. Geraldine Farrar, opera singer. Not nearly enough talent. I lingered over the entry for Eleanor Dumont, first female blackjack player, otherwise known as Madame Mustache. My spirits lifted a little as I imagined my brother’s expression.

Lucy sat across from me, dressed for dinner and muttering over her itinerary. Jack stood near the parlor’s window, pouring whiskey into a glass. His tie had been pulled loose, a navy suit jacket tossed onto the piano bench. We both favored our father, Jack and I, with gray eyes, hair black as pitch, and, to my sibling’s everlasting embarrassment, dimples deep enough to launch a boat in. He glanced over, caught my eye, and tipped his glass in my direction. A friendly offer. Sixteen years my senior, my brother practiced an unorthodox form of guardianship: tolerant in some ways, overbearing in others. Whiskey was allowed. Young men were not.

I shook my head, then asked, “What does an ornithologist do?”

Jack placed the stopper into the decanter. “An ornithologist? Someone who studies birds, I believe.”

Disappointed, I looked down. Florence Augusta Merriam Bailey, ornithologist. No, too boring. This was impossible.

“Do drink that behind a curtain, Jackson,” Lucy said, looking out the window to where Mrs. Pike could be seen entering her home across the street. Mrs. Pike, the only neighbor we knew who took the Oregon Prohibition laws seriously. “That woman would have us sent to Australia if she could. Cleo as well.”

“I don’t think they ship criminals to Australia anymore, darlin’.” But Jack obliged, moving out of sight.

Lucy frowned at me. “Are you sure you’ll be all right while we’re away?” She paused, careful not to look at her husband. “You do know you can always come with us.”

Jack cleared his throat, not even attempting to mask a pained expression, and I couldn’t help but smile. Tomorrow he and Lucy would be on a train to San Francisco to celebrate their thirteenth wedding anniversary. It was to be an extended vacation, with some business thrown in on Jack’s part. They would be gone for six weeks.

“No one wants their sister around on an anniversary trip,” I said. “It’s the opposite of romantic.”

“I’ll be fine. Truly,” I added, knowing the real reason she worried. “We’re too far west for the influenza. Everyone has said so.”

I had heard of the Spanish influenza. Who had not? A particularly fierce strain of flu, it had made its way down the eastern seaboard, sending entire families to the hospitals, crippling the military training bases. The newspapers were filled with gruesome tales from Boston, Philadelphia, and New York. Cities so far away, they could have been part of another country. But that was the extent of it. We were safe here in Oregon. In Portland. The Spanish flu had no interest in the northwestern states.

“Very well,” Lucy said, defeated. “But here, this is for you.” She handed me her itinerary. I looked it over. It contained their train arrival and departure information, as well as the names of friends located the entire length of the Pacific coast whom I could call on for assistance should I need it. Also, a reminder that they would be returning on November third, a Sunday, and would stop directly at St. Helen’s Hall to bring me home.

The same old complaint lodged on the tip of my tongue, and I bit down, hard. I didn’t want to spoil their last evening by showing how unhappy I was. They knew already. But inside, I wanted to kick something.

Many of my schoolmates had homes outside the city, traveling in from towns such as Coos Bay, Eugene, Bend, and Sisters. Others hailed from farther out: Juneau, Coeur d’Alene, Walla Walla, even Honolulu. Some lived in the student dormitories during the week and spent weekends with their families. Others traveled home only during the holidays.

I was a day student. Jack drove me to school each morning on the way to his office, and I walked home in the afternoon. Or rode the streetcar. But while Jack and Lucy were away, the house was to be closed up. Our housekeeper, Mrs. Foster, given leave. She would also be traveling tomorrow, by steamboat, to visit her son in Hood River.

I had begged to be allowed to remain at home on my own, not liking one bit the thought of six weeks in the dormitories—away from my comfortable bedroom, away from any hope of privacy. My brother was unsympathetic. He had boarded throughout his own school years. He said it built character. And that I shouldn’t grumble, because no matter how awful a girls’ dormitory might be, a boys’ residence was a thousand times worse.

I skimmed the rest of Lucy’s notes. I was to telephone the Fairmont San Francisco once a week, each Saturday, to confirm I remained in the land of the living. Good grief, I thought.

Lucy gave him a look, then proceeded to guide me through every part of their schedule. I resisted the urge to close my eyes. The smell of roasting potatoes drifted from the kitchen, and I remembered Mrs. Foster was preparing a salmon for our last supper. Beyond Lucy, the luggage was piled high in the front hall, enough trunks and suitcases and hatboxes to send six people off in style.

Trying to be discreet, I lifted a corner of the itinerary and peeked  at  my  book.  Maria  Mitchell,  first  American  woman astronomer, director of the observatory at Vassar College. Kate Furbish, botanical artist. Harriet Boyd Hawes, pioneering archaeologist. My head fell back against the cushions, and I sighed, long and tortured.

“Who has let in the bear?” Lucy exclaimed.

I straightened. While I’d been woolgathering, Jack had settled beside Lucy, his glass cradled in one hand, his other arm flung across the back of the settee. Two pairs of eyes

"Readers will be swept up in the story as Cleo builds friendships and manages to find hope amid disease and death."

"Highly sympathetic characters, a solid sense of place, and the transformation of a city under siege by an invisible assailant result in a powerful and disturbing reading experience."

"Lucier has done her research, creating a compelling work of historical fiction alongside a more timeless journey of self-discovery."

"Lucier's debut details Cleo's loss of innocence, as she deals with gruesome deaths and emergency surgeries...supplying readers with a broad understanding of the era and the epidemic via a spirited and easy-to-relate-to protagonist."

"A rare window into another time and place, one that invites readers to draw parallels to their own lives in contemporary times." 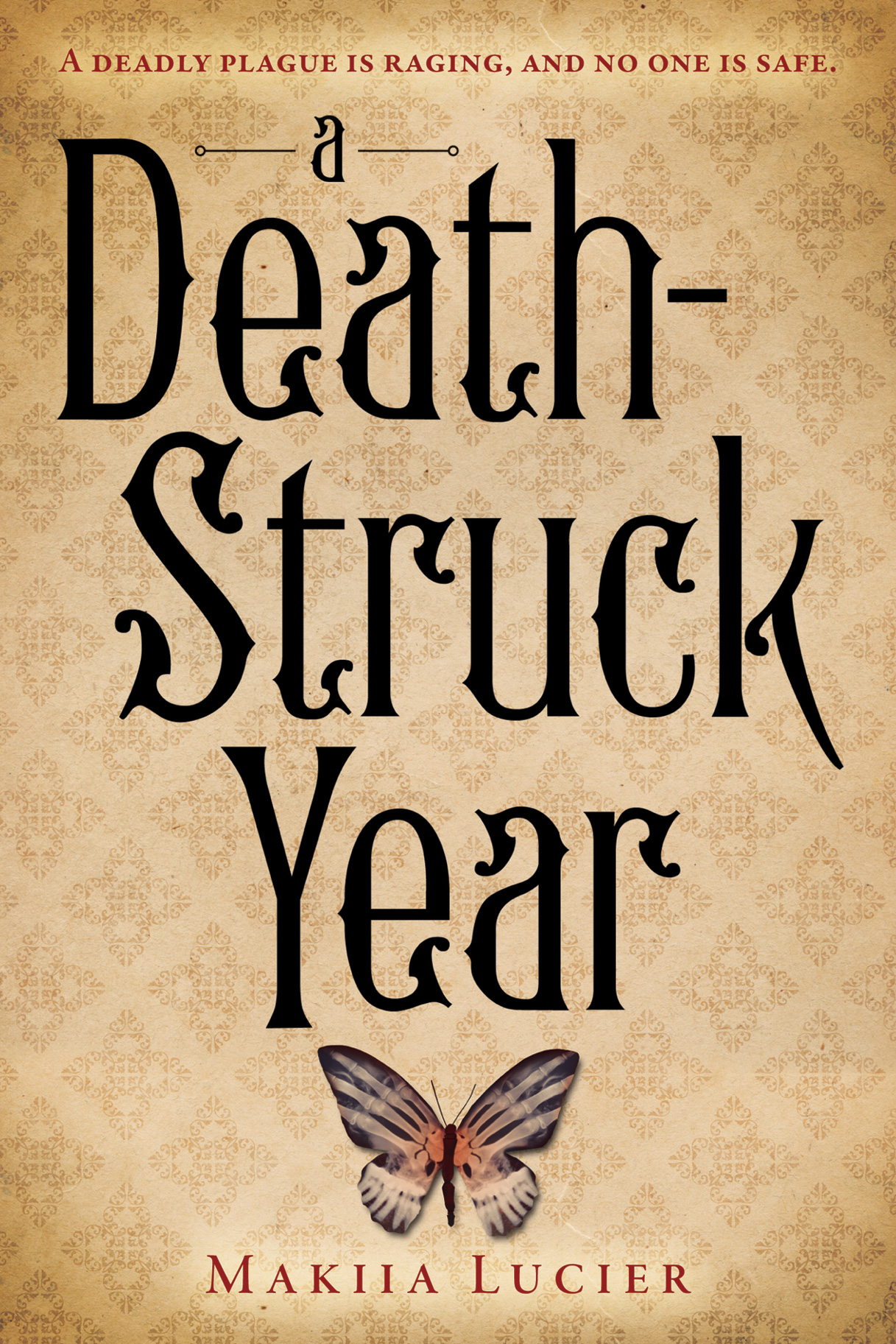