A Creature of Moonlight

A stunning debut novel about a girl who is half dragon, half human, and wholly herself.

As the only heir to the throne, Marni should have been surrounded by wealth and privilege, not living in exile—but now the time has come when she must choose between claiming her birthright as princess of a realm whose king wants her dead, and life with the father she has never known: a wild dragon who is sending his magical woods to capture her.

Fans of Bitterblue and Seraphina will be captured by a Creature of Moonlight, with its richly layered storytelling and the powerful choices its strong heroine must make.

About the author
Rebecca Hahn

Rebecca Hahn grew up in Iowa, attended college in Minnesota, and soon afterward moved to New York City, where she worked in book publishing and wrote A Creature of Moonlight on the side. She now lives in California. Visit her at www.rebeccahahnbooks.com.

All summer long the villagers have been talking of the woods.

Even those living many hills away can see it: their crops are disappearing; their land is shrinking by the day. We hear story after story. One evening a well will be standing untouched, a good twenty feet from the shade, and when the farmer’s daughter goes to draw water in the morning, there will be nothing left but a pile of stones and a new tree or three growing out of the rubble. And all along beside it, the woods stretch on and on, where no woods were the night before.

In years gone past, this happened now and again: a goatherd would complain of his flock’s favorite hill being eaten by shadows and trunks, or a shed alongside the trees would rust overnight and be crawling with vines in the morning. But just as often, an old fence was uncovered by the woods as they retreated, or a long-lost watering hole suddenly appeared again, where it hadn’t been for near fifty years. The woods come and they go, like the sun, like the wind, like the seasons. It isn’t something to fret about, not in a fearful way. The farmers have always complained of it, but they’ve never talked of it as they are talking now of this advance.

This year, the trees do not go; they only come, on and on, and rumors from all over our land say the same. They are folding in around us.

It terrifies the villagers something fierce. When they come to bring our supplies or to buy some flowers, they mutter about it with my Gramps. I see them shaking their heads, twisting their caps in their hands. Gramps tells them it’s nothing to worry about, that the trees will take themselves back again, just as they always do.

They listen to him. When he talks, it’s as if they forget the state of his legs and see only the calm on his face, hear only the slow, measured way he has with words. They leave more peaceful than they were when they came. They leave less worried about the creeping trees.

When they’ve gone, though, I see my Gramps sigh. I see him look sideways at me where I’m leaning against the porch rail, as if I won’t notice that way. As if I don’t already know he frets more than he’d ever let on. There’s no one like my Gramps for fretting. Any sickness going around, any rumor of bandits—I see those eyebrows drawing in tight. He’ll not talk about it, maybe, but he worries, more and more the less he can do.

Well, and this time, could be there’s something to it. Since I was small, since we lived here and made ourselves the flower people to keep from getting our heads chopped off, Gramps has warned me not to wander into the trees that push up right against our place—out back, beyond the flowers and paths and bushes, over the low stone wall that rings around our garden. But out here, living so close, it would be near impossible not to follow my curiosity over that wall, and I’ve had years to be curious. My Gramps doesn’t realize—I only go when he’s not looking—how well I’ve always known our woods.

There’s not much Gramps could do to stop me, stuck as he is in his chair, needing me for every little thing. Oh, he could yell, and if I didn’t come running, he could get himself up with his cane and wobble out the back, and if I wasn’t there, he could tear me down something wretched when he saw me returning. But I don’t go so far that I can’t hear my Gramps’s voice. Not just because I’m avoiding trouble. Not just because I don’t want to scare him, neither, though those are both good reasons. What if something were to happen to Gramps and I wasn’t there to pick him off the floor or run for help? or what if the king decided that today was the day he’d stop tolerating those flower people, and he sent some men and horses down, and I wasn’t there to scream and scratch until they killed me for my Gramps?

So Gramps doesn’t know how often I go to the woods.

There are all the things you would think of living there: rabbits and squirrels and hedgehogs and, late in the evening, bats. The trees are spaced out like they must want to be. Nobody comes to chop them down. Nobody stops them from spreading apart or smothering each other or dropping their needles just as they please, in patterns and swirls and such. I wouldn’t half mind being one of those trees. I reckon it’s a peaceful life, with nothing but the birds, the wind, and the sun for your company.

It’s peaceful visiting them, wandering this way and that through their silent trunks, humming and thinking my own thoughts.

There are other things there, too, things you wouldn’t expect.

There’s a laugh behind a tree when nobody’s around to make it. A flash of red from branch to branch, like a spark from a fire, but nothing’s burning. A woman dressed in green, sitting alone on a log and knitting something out of nothing, out of leaves and grass and berries, out of sunshine. She looks up, and she has no eyes. Where her eyes should be there are lights like tiny suns, and she’s smiling, but I don’t know how, because she doesn’t have a mouth like anyone else’s, not that I can see. There’s just a mist all around her head, and those burning eyes looking right at me.

I don’t stop to talk to things like that. I used to, once, before I knew any better. Back then I used to play with the little people hidden under the bushes and make my own crafts next to the lady on the log as she knit and sang to me, and I’d fly away sometimes, though never very far, with great winged things that held me in their arms. I was always wary of straying too far from Gramps, even when I was small.

It was only gradually that I grew frightened of the woods folk. The laugh turned, bit by bit, from cheerful to menacing; the spark changed from beautiful to dangerous. I’d see the little ones eyeing me with something other than playfulness. I’d see the lady’s clever fingers tensing as we knit, and I’d wonder just when she’d decide to grab my wrist, to take me away with her.

So I stopped listening, and I stopped looking. It’s been many years now since I followed whenever the voices called from the woods. I no longer talk back to birds with people’s faces, or watch as misty creatures dart through the brooks.

But when I slip out into the trees this summer, I hear the voices singing more, and I see the lights flickering here and there, yellow and blue and green, always just at the corners of my eyes, tempting me away.

I dare not go out when the sun is low in the sky. Then I’m like to forget, almost, who I am, and that I ever had a Gramps, and that the little people tugging at my skirt hem are not my people, and are not to be trusted, even though they bear the sweetest, most innocent faces in the world.

Yet I don’t stop going completely, neither. When Gramps is sleeping the sun away, or when I’ve worked so hard at digging out weeds and pruning back bushes and hauling water to and from the well that I can’t stand one minute more, or when I get to thinking on things just so, I hop over our garden wall and go walking out there, breathing in the pine and the damp, dark places of the forest.

It’s a dangerous pastime, I know, but I can’t help myself. There’s a thing that draws me to the woods, even more than the peacefulness ...

“Hahn writes with such beauty and persuasion that she could make me believe in anything. She writes the sort of prose you give yourself to willingly. This is a rare and special book, a magical book; I’ve been searching for it and didn’t even know it.”

“Rebecca Hahn captures that elusive sense of an experience just out of reach—a memory, a dream, a voice in the woods, a road not taken. I love the book and hope she dreams up many more.”

* "In Hahn's polished, confident debut, the daughter of a runaway princess and a dragon comes of age...this profound and original story feels like a long-lost classic fairy tale."

"This debut novel is abundant with both magical images and realistic family conflict, melding them into a compelling story."

"This book's greatest strength lies in the vivid woodland scenes and the rich detail that describes the mystical pieces of Marni's tale."

* "A dreamlike, poetic fantasy bildungroman explores the power of choice and the meaning of home...Hahn's debut is cumulatively stunning"

"Told in a languorous, breathy first-person narrative, Hahn's debut novel follows tenacious Marni as she tries to find a home between to vastly different worlds."

* "This is fairy-tale fantasy as its best, with evocative prose and simple storytelling deftly conveying a powerful emotional core that will haunt readers long after the pages end."

"An eloquent story about free will, the meaning of home, and love's varied forms." 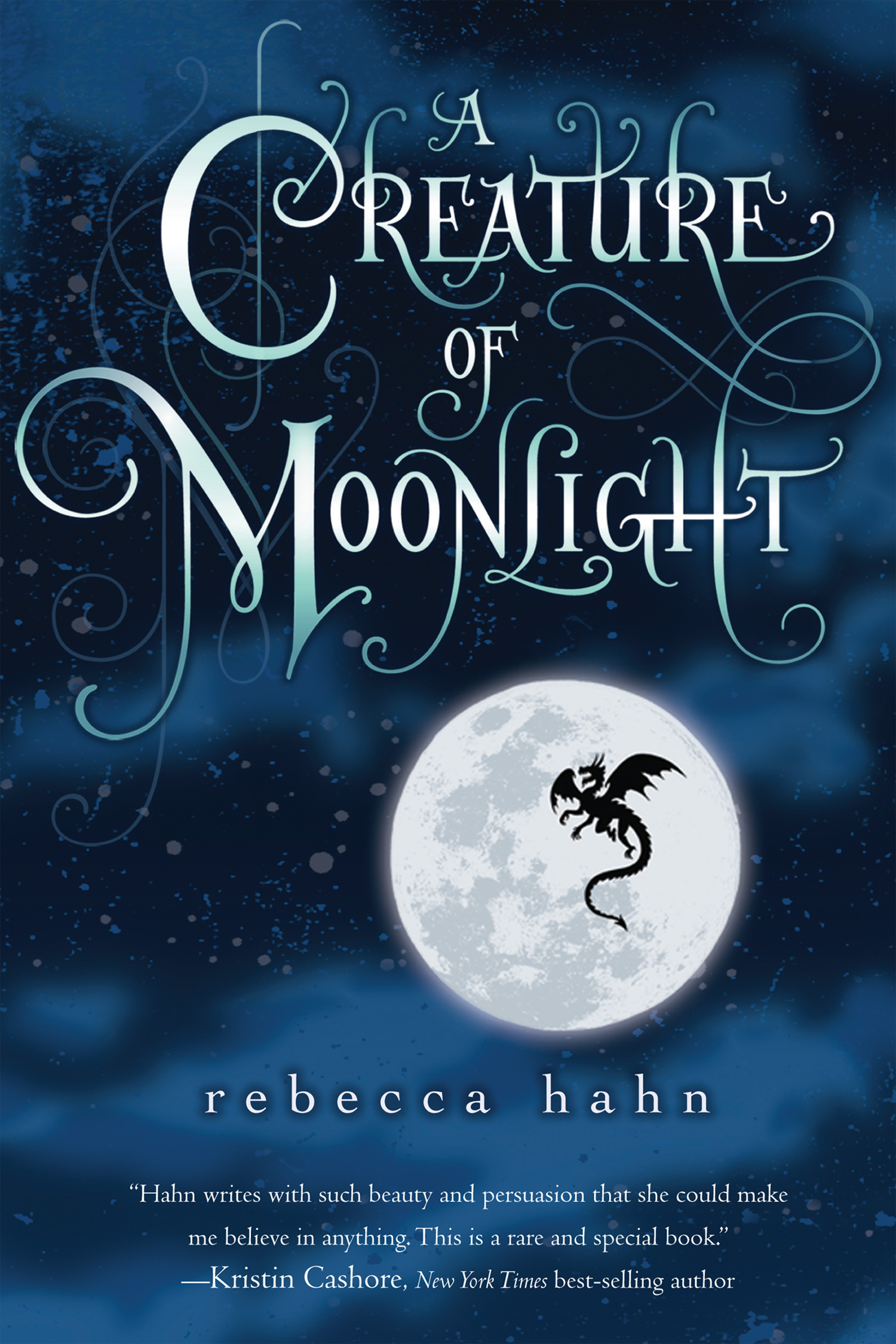