A Certain Slant of Light

In the class of the high school English teacher she has been haunting, Helen feels them: for the first time in 130 years, human eyes are looking at her. They belong to a boy, a boy who has not seemed remarkable until now. And Helen—terrified, but intrigued—is drawn to him. The fact that he is in a body and she is not presents this unlikely couple with their first challenge. But as the lovers struggle to find a way to be together, they begin to discover the secrets of their former lives and of the young people they come to possess.

In the class of the high school English teacher she has been haunting, Helen feels them: for the first time in 130 years, human eyes are looking at her. They belong to a boy, a boy who has not seemed remarkable until now. And Helen—terrified, but intrigued—is drawn to him. The fact that he is in a body and she is not presents this unlikely couple with their first challenge. But as the lovers struggle to find a way to be together, they begin to discover the secrets of their former lives and of the young people they come to possess.

About the author
Laura Whitcomb

Laura Whitcomb grew up in Pasadena, California where she lived in a mildly haunted house for 12 years. She has taught English in California and Hawaii. The winner of three Kay Snow Writing Awards, she was once runner up in the Bulwer-Lytton Fiction contest for the best first sentence of the worst science fiction novel never written. She lives in Portland, Oregon, with her dog Maximus.

Chapter One Someone was looking at me, a disturbing sensation if you’re dead. I was with my teacher, Mr. Brown. As usual, we were in our classroom, that safe and wooden-walled box — the windows opening onto the grassy field to the west, the fading flag standing in the chalk dust corner, the television mounted above the bulletin board like a sleeping eye, and Mr. Brown’s princely table keeping watch over a regiment of student desks. At that moment I was scribbling invisible comments in the margins of a paper left in Mr. Brown’s tray, though my words were never read by the students. Sometimes Mr. Brown quoted me, all the same, while writing his own comments. Perhaps I couldn’t tickle the inside of his ear, but I could reach the mysterious curves of his mind.

Although I could not feel paper between my fingers, smell ink, or taste the tip of a pencil, I could see and hear the world with all the clarity of the Living. They, on the other hand, did not see me as a shadow or a floating vapor. To the Quick, I was empty air. Or so I thought. As an apathetic girl read aloud from Nicholas Nickleby, as Mr. Brown began to daydream about how he had kept his wife awake the night before, as my spectral pen hovered over a misspelled word, I felt someone watching me. Not even my beloved Mr. Brown could see me with his eyes. I had been dead so long, hovering at the side of my hosts, seeing and hearing the world but never being heard by anyone and never, in all these long years, never being seen by human eyes. I held stone still while the room folded in around me like a closing hand. When I looked up, it was not in fear but in wonder. My vision telescoped so that there was only a small hole in the darkness to see through. And that’s where I found it, the face that was turned up to me. Like a child playing at hide-and-seek, I did not move, in case I had been mistaken about being spotted. And childishly I felt both the desire to stay hidden and a thrill of anticipation about being caught. For this face, turned squarely to me, had eyes set directly on mine. I was standing in front of the blackboard. That must be it, I thought. He’s reading something Mr. Brown wrote there — the chapter he’s to study at home that night or the date of the next quiz. The eyes belonged to an unremarkable young man, like most of the others at this school. Since this group of students was in the eleventh grade, he could be no more than seventeen. I’d seen him before and thought nothing of him. He had always been vacant, pale, and dull. If anyone were to somehow manage to see me with his eyes, it would not be this sort of lad — this mere ashes-on-the-inside kind. To really see me, someone would have to be extraordinary. I moved slowly, crossing behind Mr. Brown’s chair, to stand in the corner of the classroom beside the flag stand. The eyes did not follow me. The lids blinked slowly.

But, the next moment, the eyes flicked to mine again, and a shock went through me. I gasped and the flag behind me stirred. Yet this boy’s expression never changed, and next moment, he was staring at the blackboard again. His features were so blank, I decided I had imagined it. He had looked to the corner because I had disturbed the flag a little. This happened frequently. If I were to move too quickly too near an object, it might tremble or rock, but not much, and never when I wanted it to. When you are Light, it is not the breeze of your rushing past a flower that makes it tremble. Nor is it the brush of your skirts that starts a drape fluttering. When you are Light, it is only your emotions that can send a ripple into the tangible world. A flash of frustration when your host closes a novel he is reading too soon might stir his hair and cause him to check the window for a draft. A sigh of mourning at the beauty of a rose you cannot smell might startle a bee away. Or a silent laugh at a misused word might cause a student’s arm to prickle with an inexplicable chill.

The bell rang, and every student, including this pale young man, slapped books closed and stood, with a scrape of chair feet, shuffling toward the door. Mr. Brown snapped immediately from his bed dream. “I’ll bring a video tomorrow,” he said. “And don’t fall asleep during it, or I’ll make you act it out yourselves.” Two or three of his students groaned at this threat, but most were already gone, mentally if not physically.

So this was how it began. When you are Light, day and night have less meaning. The night is not needed for rest — it’s merely an annoying darkness for several hours. But a chain of days and nights is the way in which the Quick measure their journeys. This is the story of my journey back through the Quick. I would climb into flesh aagain for a chain of six days.

I stayed shamefully close to my Mr. Brown for the rest of the day. When you cleave to a host, it is nnnnnot necessary to shadow the person from room to room. I would never follow a male host into the bath, for instance, or into the marriage bed, man or woman. I learned from the beginning how to survive. From the moment I found my first host, I had been devoted to the rules that kept my punishment at bay.

I remembered all my hauntings clearly, but only a few images stayed with me from the time before I was Light. I remembered a man’s head on the pillow beside me. He had straw-colored hair, and when he opened his eyes, he was looking not at me but toward the window, where wind was rattling the pane. A handsome face that brought no comfort. I remembered catching a glimpse of my own eyes in the window reflection as I watched this man ride away on a black horse through the farm gate, the horizon heavy with clouds. And I remembered seeing a pair of frightened eyes looking up at me, full of tears. I could remember my name, my age, that I was a woman, but death swallowed the rest. The pain, once I was dead, was very memorable. I was deep inside the cold, smothering belly of a grave when my first haunting began. I heard her voice in the darkness reading Keats, “Ode to a Nightingale.” Icy water was burning down my throat, splintering my ribs, and my ears were filled with a sound like a demon howling, but I could hear her voice and reached for her. One desperate hand burst from the flood and caught the hem of her gown. I dragged myself, hand over hand, out of the earth and quaked at her feet, clutching her skirts, weeping muddy tears. All I knew was that I had been tortured in the blackness, and then I had escaped. Perhaps I hadn’t reached the brightness of heaven, but at least I was here, in her lamplight, safe. It took me a long time to realize that she was not reading to me; nor were her shoes spotted with mud. I held her, yet my arms did not wrinkle the folds of her dress. I cried at her feet like a wretch about to be stoned, kissing the hem of Christ’s garment, but she didn’t see me, couldn’t hear my sobs. I looked at her — a fragile face, pale but rosy at the cheeks and nose as if it were always winter around her. She had gray duck-down hair piled on her head like a bird’s nest and sharp green eyes, clever as a cat’s. She was solid and warm with a fluttering pulse. She wore a black dress with mismatched buttons, the elbows worn thin. Tiny spots of ink dotted her butter- colored shawl. The cover of the little book in her hands was embossed with the figure of a running stag. It was all real and blazing with detail. But I was shadow, light as mist, mute as the wallpaper. “Please help me,” I said to her. But deaf to me, she turned the page. “Thou wast not born for death, immortal Bird . . .” As she read aloud the familiar words, I knew what

"Whitcomb writes with a grace that befits Helen’s more modulated world while depicting contemporary society with sharp insight. In the subgenre of dead-narrator tales, this book shows the engaging possibilities of immortality–complete with a twist at the end that wholly satisfies." --School Library Journal School Library Journal

"Whitcomb is generous with atmospheric detail . . . and she creatively pulls together a dramatic and compelling plot that cleverly grants rebellious teen romance a timeless grandeur." --The Bulletin Bulletin of the Center for Children's Books

"[An] original, opinionated, sexy, and romantic novel of the afterlife." —Horn Book

"Whitcomb writes beautifully . . . this will be irresistible to teens." ––Booklist Booklist, ALA 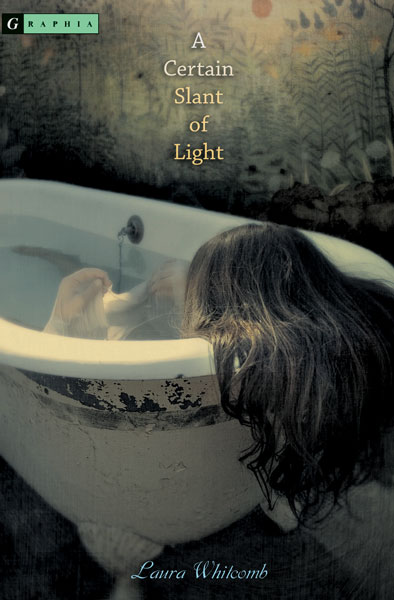